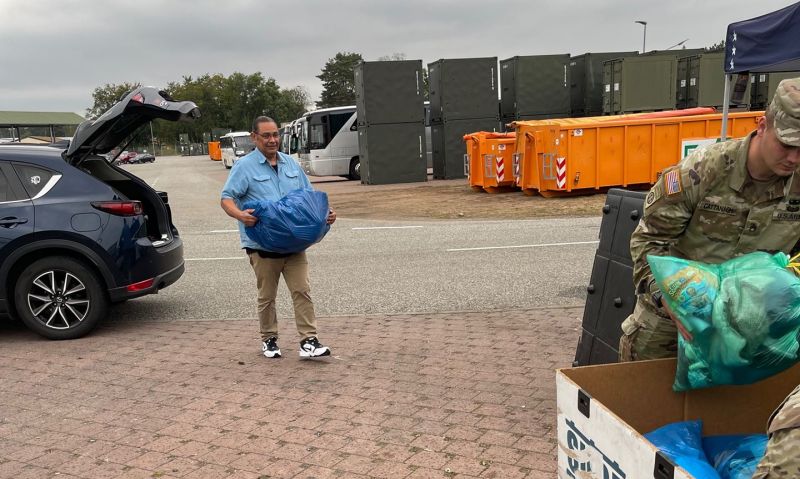 Since Aug. 20, 2021, more than 200 aircraft and 35,000 Afghan evacuees have arrived in the Kaiserslautern Military Community, home to Kaiserslautern American Legion Post GR01. These evacuees were sheltered, fed and cared for by volunteers in the surrounding community. While this mission has been unrelenting, Post GR01 and its members without hesitation inquired about an avenue to participate in this history-making venture, Operation Allies Refuge.

I reached out to several agencies supporting this operation and was directed to contact Civil Affairs, Public Affairs, the USO and the Red Cross. After establishing the contacts, I coordinated with Department of France Commander Santos Alvarado, and discussed the logistics of collecting items to support Operation Allies Refuge.

Information was dispatched throughout the department describing each type of donations, the urgency of the needed items, and where and how to ensure they could be received at the designated locations within the Kaiserslautern community. Department Legionnaires came from as far away as Frankfurt, and Kitzingen in the Bavarian area of Germany. District Auxiliary President Sonja Dennis, her husband James, District Secretary Christa Purdy and other groups responded with much-needed items ranging from basic necessities such as food and clothing (men’s, women’s, children’s) to different types of fruits.

The Rhine Ordnance Barracks set up special plastic drywall containers following the Legion’s notification of many donations coming their way to support their operation, located adjacent to Ramstein Air Base. The Department of France donated approximately 2,000 to 3,000 pounds of items. Monetary donations were submitted through different websites, totaling $1,000 to $1,500.

Kaiserslautern Post GR01 has been in existence since 1953 and has never been in any sort of evacuation effort of this magnitude. We were ecstatic to be a part of this expansive humanitarian effort. I want to thank everyone for their generous donations, including Past National Vice Commander Doug Haggan and Commander Alvarado.