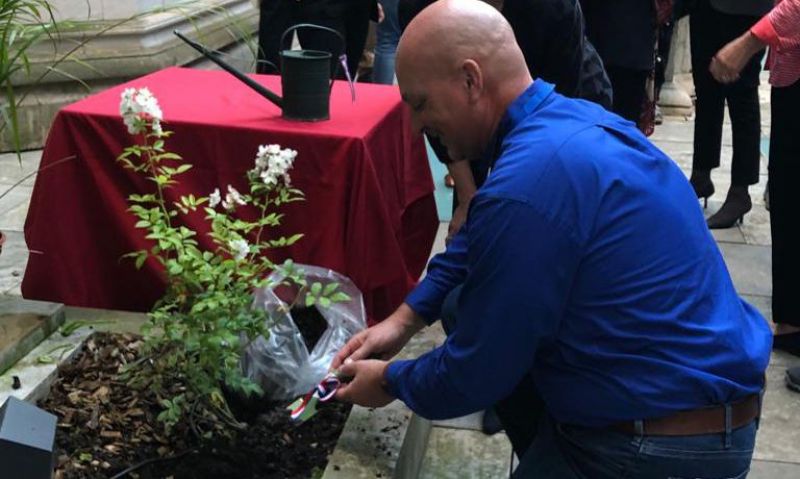 Gavin McIlvenna, president of the Tomb Guard Society, helps place soil on the "Never Forget Rose," created by the Ducher Roseraie in honor of the centennial. (Photo courtesy Society of the Honor Guard, Tomb of the Unknown Soldier)

The main body of events in France marking the centennial of the Tomb of the Unknown Soldier is set to occur in the next few days, with commemorations of the soldier’s selection and voyage to the United States.

On Oct. 23-24, the Hôtel de Ville in Châlons-en-Champagne will host a commemoration and events. On the 23rd, a vigil begins at 5 p.m., open to the public. It was on the 23rd that the four World War I Unknown Soldier candidates arrived from American cemeteries in the region, and a joint honor guard of French and American soldiers stood through the night until the ceremonies the next day. On the 24th, a public ceremony starts at 11 a.m. with speeches, followed by a parade to a war memorial and concluding with a wreath ceremony. It was on the 24th that Sgt. Edward Younger selected the World War I Unknown Soldier. For more information, contact publicaffairs@tombguard.org or a.invernici@chalonsenchampagne.fr.

On Oct. 25 at the Quai Roger Meunier in Le Havre, a public ceremony at 3 p.m. will mark the 100th anniversary of the departure of the World War I Unknown Soldier from Le Havre to the United States in 1921 and USS Olympia’s mission to bring him home. The city will dedicate a special plaque on the site where the Unknown Soldier left French soil. Ceremony begins at 3 p.m., open to the public. For more information, contact publicaffairs@tombguard.org or sebastien.vau-rihal@lehavre.fr.

On Oct. 26 at the Arc de Triomphe in Paris, members of the Society of the Honor Guard, Tomb of the Unknown Soldier will render honors and pay tribute to the French Unknown Soldier, standing with French and American veterans, at 5:30 p.m. An RSVP is required for ceremony participation to contact@parispost1.fr, but the ceremony is open to the public for viewing. More events, such as talks at ABMC cemeteries, can be found here.

The first event has already taken place: on Oct. 19, the first Never Forget Garden outside the United States was dedicated in the Deans' Garden at the American Cathedral of the Holy Trinity in Paris. According to a press release by the Society of the Honor Guard, Tomb of the Unknown Soldier: “The cathedral has deep historical ties in the American community in France. When it was founded as the American Episcopal Church of the Holy Trinity in 1858, U.S. Sen. Hamilton Fish served on its first vestry before returning to the United States to campaign for Abraham Lincoln for president. Two generations later, his grandson [and American Legion founder] U.S. Rep. Hamilton Fish III led the proposal to establish a Tomb of the Unknown Soldier at Arlington National Cemetery. In 1923, the first monument to the 116,000 American dead in World War I was dedicated in a Memorial Cloister.” Representatives from American Legion Post 1 in Paris were in attendance, as Department of France members are at all the French centennial events. Learn more about Never Forget Gardens here.