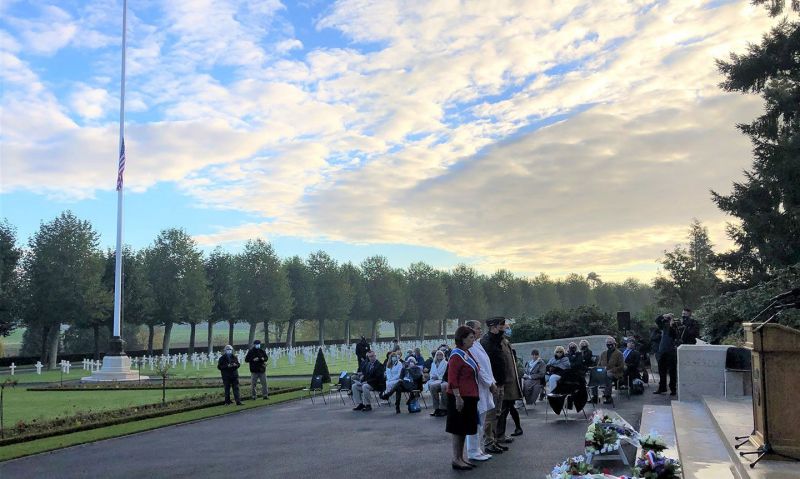 Over a weeklong stretch in October, several events at historical sites and American Battle Monuments Commission (ABMC) cemeteries in France have honored the 100-year anniversary of the journey made by the Unknown Soldier to the Tomb prepared for him at Arlington National Cemetery.

There was American Legion involvement throughout the process, starting with Legionnaires helping guard the body as it headed for the coast and to the United States. As such, Post 1 in Paris dedicated itself to a presence in the proceedings as local ground support. According to Post Commander Bryan Schell, “For Paris Post 1, this centennial is important because our Legionnaires were present at the ceremony 100 years ago.”

Plans have been in the works since the spring of 2020. “Ginette Crosely, Paris Post 1 Auxiliary president, was the first person to speak with Gavin McIlvenna, president of the Society of the Honor Guard, Tomb of the Unknown Soldier. I started to assist, and this was around when the pandemic first hit France. We worked with Gavin to help contact the different cities and associations to build support for the centennial.”

A centennial flag was taken in a procession to key locations at ABMC cemeteries, to be ritually raised and flown. Post 1 members were part of a “pilgrimage” group that included Gold Star Mothers, former guards at the Tomb, veterans and first responders, and others. “It was an unforgettable journey into the past while spending it with a group of patriotic individuals,” Schell commented. “The experience will be unforgettable for all of us.”

At Châlons-en-Champagne, where the Unknown Soldier was selected from a group of unidentified deceased, Schell said the city went all out for the anniversary. In addition to a parade, they “did a full recreation of the Hotel de Ville, filling it full of white roses and time-period American soldiers to re-enact what it was like 100 years ago.”

The French activities wrapped up Oct. 27 with a ceremony at the Arc de Triomphe in Paris. Attention will  now shift to events in the United States, culminating at Arlington around Veterans Day; see a list of local and national events here.

See a photo gallery of the Department of France at the centennial here.