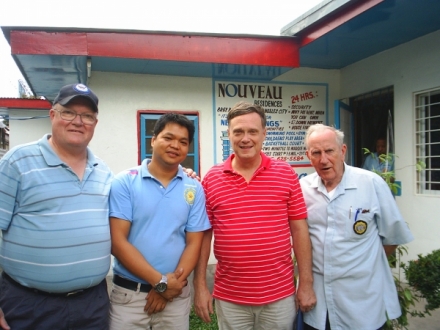 My wife Marie and I have been on vacation to the Philippines having arrived here on December 15th.

We first travelled north on the main island of Luzon to Bonuan, where my wife is from and Dagupan City, which is very near the Lingayen Gulf. It was here that we celebrated the birth of our Savior and the New Years enjoying the Philippine culture with much family, friends, and great food. We stayed at the Leisure Coast Resort in Dagupan City. It has wonderful cabana cottages, air conditioned, hot water showers, a water park, and internet connectivity. We had almost thirty family members at the water park on December 30, where we celebrated my birthday a little early. All the kids had a wonderful time. I would highly recommend the Leisure Coast Resort if ever staying in Dagupan City. It is quiet and very secure.

We left January 2 for Olongapo City, which was home to the Subic Bay Naval Base. I had not been back to Subic Bay since 1987. The base and the surrounding areas of Ologapo and Subic City has changed very much. The base chapel is still there and adjacent to it was the BOQ Annex, now an apartment complex. I stayed in the Annex when I was the Midshipman Liaison Officer in the summer of 1984. The COMNVAPHIL headquarters building is still there, it is now the headquarters for the Subic Bay Freeport Zone.

There were two ships in port, the USS Emory S. Land, a submarine tender, and a MSC oiler of the Cimarron class. I can remember my times in Subic when there would be twenty to thirty ships in port.

We stayed at the Meridian Court Hotel a very nice, modern, and clean hotel. We ate at the restaurant which featured both American and Filippino cuisine.

While in the Olangapo area, we had the great opportunity to visit with The American Legion of the Philippines department leadership. The photo shows from left to right myself, SAL Detachment Commander Ariel Mercado, Department Adjutant Chris Schrauben, and Department Commander Joe Carsley. We are pictured in front of Post 123 in Angeles City, adjacent to the former Clark Air Force Base. We were also able to visit Post 10, also in Angeles City and Post 4 in Olongapo City (of which Dept Adjutant Schrauben is also the Post Commander!).

We also were able to meet Department Service Officer Bill Brown (who happens to come from Indianapolis, Indiana so we were able to share Hoosier stories!), Department 1st Vice Commander Rhett Webber, and many many other dedicated Legionnaires and ALA members at the three posts.

OUR THANKS TO THE AMERICAN LEGION FAMILY OF THE PHILIPPINES FOR THEIR WONDERFUL HOSPITALITY EXTENDED TO MY FAMILY DURING OUR VISIT!!! we had a late lunch at Post 123, which was OUTSTANDING!

We were also given a guided tour of the Clark Veterans Cemetery - the Asia Arlington. What a fascinating and inspiring resting place. We were informed that the 112th Congress did pass a major appropriation legislation to allow for the refurbishing of the cemetery which was covered in a layer of volcanic ash when Mt. Pinatubo erupted in 1991. More to follow on this very sacred and hallowed place!

With a heavy heart and many fond memories of years ago with shipmates and ships we departed Olongapo City on my birthday, January 4 for the quick trip via the SCTEX and NLEX freeways to Manila. What used to be a three hour trip to travel from Olongapo to Clark has not been reduced to a little more than an hour via a modern four lane interstate system.

We will do some sight seeing here in Manila before heading back home to Indianapolis on January 8.

So if your travels take you to the main island of Luzon and you are looking for a Legion post look no further than Post 4 in Olongapo City or Posts 10 and 123 in Angeles City.

Have you traveled near an American Legion Post outside the borders of the continental United States?