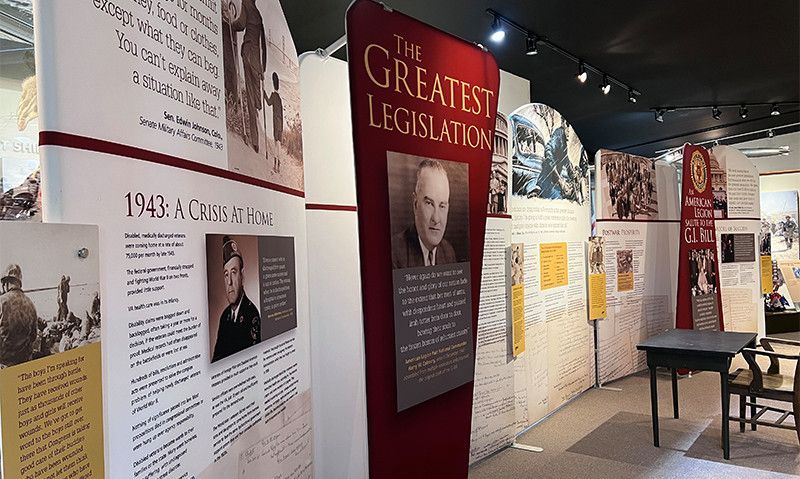 “The Greatest Legislation” traveling exhibit, which will be used as part of the Boys State program there, returns to Montana through mid-July. Holly K. Soria photo

Exhibits that tell the stories of the GI Bill and Old Glory are currently on display at Fort William Henry Harrison near Helena, Mont. “The Greatest Legislation: An American Legion Salute to the GI Bill” and “The Colors of Our Country” will be displayed at the base until after Flag Day on June 14.

The displays will be a part of the curriculum of the 75th annual Montana American Legion Boys State program, which will take place at Fort Harrison May 29 – June 3.

American Legion Department of Montana historian and Montana Military Museum Director Ray Read said the larger version of the exhibit, which was displayed at the museum in 2018, was so well received, that the community was eager to have another chance to see it. Boys State was the perfect opportunity.

“What better thing to show the boys how to do legislation?” Read said. “This will be a great primer for them.”

“The Colors of our Country” will be on display in the lobby of Helena Armed Forces Reserve Center, just outside the rooms where Boys State classes will take place. Read noted that flag education will also be a large part of the Boys State program.

“We want to make sure the story of ‘The Colors of Our Country’ is told in great detail,” he said. Read explained that the boys will use the flag exhibit and the centennial flag bookazine, “Indivisible, The Story of Our Flag” to learn the symbolism and meaning of the flag.

Fort Harrison, established in 1895, was most notably used in 1942 as an organization and training area for the U.S. Army's 1st Special Service Force, a joint World War II American-Canadian light infantry brigade and predecessor to the U.S. Special Forces. Today, the base is home to the Montana National Guard, U.S. Army Reserve and U.S. Navy Reserve, as well as the Montana VA Medical Center and the Montana Military Museum.

After Flag Day, “The Colors of Our Country” will be moved to Missoula, Mont., where it will be on display during the Montana American Legion Department Convention. The GI Bill exhibit will continue to be available at the museum through early July.

The Montana Military Museum is open to the public from 9 a.m. to 4 p.m. every Thursday, free of admission charge.