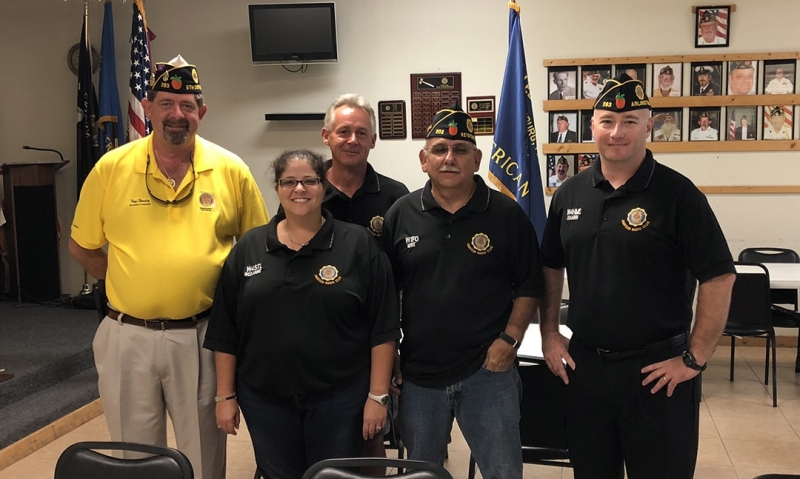 [The below article was first posted to Legion.org last December, but in the wake of the threat posed last month by Hurricane Dorian, it's a good time to check in on the 5th District TALARC. Shawn Beal reports that since this article, the club "has had an antenna, antenna mast, radios, cables and a generator donated ... This allows Post 202 to only need license-led operators to come in and operate." Members monitored Dorian and its track - also keeping post and district Legion leadership apprised - until it moved away from their area.]

The 5th District of the American Legion Department of Florida now boasts a ham radio club of its own, and communication and preparedness are at its heart.

The 5th District TALARC signed its by-laws on Sept. 29, and is currently operational within the district and department. The club’s call sign is W8TAL. It was formed after the powerful 2017 Hurricane Irma, which avoided the hurricane-inured coasts and devastated central Florida instead.

Club president, and 5th District disaster prep chairman, Shawn Beal W4HMD commented soon after the signing in an email to the national TALARC (while deployed to the Pacific theater with the U.S. Navy), “The 5th District TALARC is a district-level club to allow for expansion, the ability to move meetings to different posts and to help allow all posts to join, thus providing better visibility throughout the district.”

Mike Garcia W1FO, commander of Keystone-Melrose Post 202 in Keystone Heights and trustee of W8TAL, talked more about the formation and development of the club to The American Legion.

Garcia: For some background on the circumstances that first drove this project, most hurricanes in Florida come onto shore along our eastern and western coastlines. Hurricane Irma was different. It surprised the entire state when it took a straight path right up to the center. American Legion Post 250 of Middleburg and Post 202 sit right along that path. Our small communities found themselves with storm damage it simply was not used to. Shawn lives in Middleburg, and he found himself unable to communicate with his family and neighbors while at the naval station in Jacksonville. That is what initially motivated Shawn and the 5th District to look into a way to provide emergency communication teams in the district.

What did you see as the need that this club could fill?

The need we are trying to fill is to provide trained emergency communication teams at each of our 5th District American Legion posts.

What was the process of getting it started? What would you give as advice to people wanting to do the same?

While on the way back from a 5th District Riders meeting, Shawn mentioned that he had been appointed as disaster prep chairman for the 5th District and that he was looking into ham radio as a means to fill the communication gap that existed. The interest and support of the district already existed. Our Post 202 Riders secretary mentioned to Shawn that I was a licensed ham radio operator and that I had been involved in providing emergency traffic into Puerto Rico during a previous hurricane. Shawn asked if I would be willing to conduct ham radio licensing classes to members interested in joining the group, and I agreed. Shawn recruited some members, and we began the process of getting them licensed – including Shawn. We were also fortunate to recruit some members who were already licensed ham radio operators. They made it possible for us to meet the requirements needed to form an official ham radio club under FCC regulations. Shawn worked with the national American Legion ham radio club and the 5th District commander to create by-laws.

My advice to anyone wanting to do the same is approach your district commanders with logical reasons for how the program would benefit your district and your communities. Both our endeavors fall within the mission of The American Legion.

What is the vision for this club, one year and five years from now?

It would be great if a year from now we had one or two trained members at each of the posts in the district, but we know that is unrealistic. Currently, only my Post 202 has approval for the installation of a permanent ham radio station. Our post also has four licensed members, all holding Extra Class licenses. We now have emergency back-up power from a 5 KW generator at Post 202, and we will be attempting to make the post an official EOC facility. So if we could get even two or three other posts throughout the district on board, we would consider this year a success. This goal should be attainable; we currently have three posts – 202, 250 and 283 – with licensed and qualified members. Although 250 and 283 do not have ham radio stations, the members all have stations of their own that can be used during emergencies.

In five years we would like to see at least enough posts scattered throughout the district with the same capabilities.

How is your district club reaching out to, and interacting with, posts?

Our ability to reach out has been made easy due to the great support we are receiving from our 5th District post commanders. Shawn or I give a monthly report at our monthly district meeting. They are well aware of the project, and they do a great job of informing their membership. We currently have members from at least four posts interested in joining our ranks.

What other advice or thoughts do you have on the club?

Like all Legion programs, to be successful, you have to have members who have a passion for what they are doing; and you must garner the support of your district commanders first. It is not easy, and you cannot rush it. To replicate what we have started, you must go slow and always keep an eye on the ball. Also, it takes hard work, time and commitment. Members of the 5th District TALARC are here to help any post or member wanting to duplicate our program.