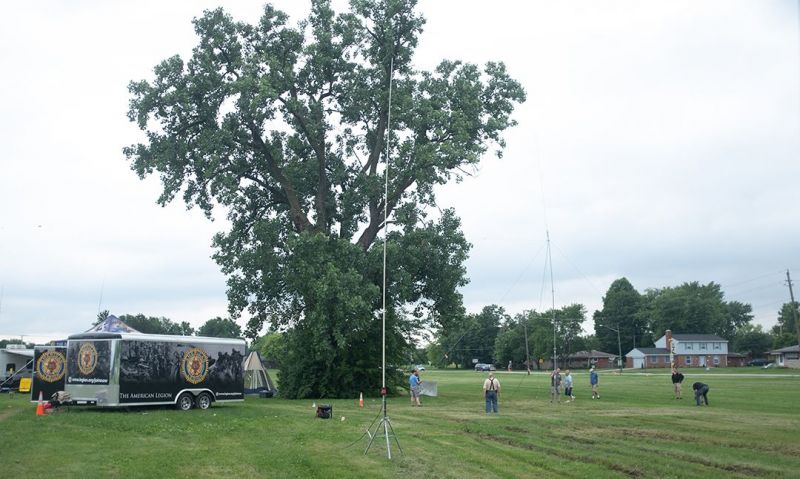 TALARC makes a presence at the Indy ARRL Field Day near the Indianapolis Motor Speedway. TALARC placed a trailer and tent at the site, and operated three radios out of the trailer using a 2000 watt generator to simulate a disaster response. Contacts were made with operators across the country. (Photo by Josh Marshall)

"The American Legion Amateur Radio Club (TALARC), with call sign K9TAL, participated in Field Day 2019 along with the Indianapolis Radio Club and other groups. The site chosen this year was next to the famous Indianapolis Motor Speedway. Station K9TAL operated on the 10M band exclusively and made some 53 contacts as the GOTA (Get On The Air) station and later made a Field Day 1A entry of its own, in the final scoring. We consider it a great step in our progression as a club, and plans are already underway for next year.

American Legion National Headquarters also stepped up and provided not only a Legion-branded trailer, but also a 2800-watt generator to keep our batteries charged overnight. While we had a great weekend operating, the event didn’t gather much attention from the community, likely because of other activities always underway in a city this size. But we did have a steady flow of youngsters and students studying for their first “ham” licenses, and we gladly handed the mic to them so they could attempt to make their first “CQ.” We’re happy to say that several of them made their very first HF QSO that day!

But we weren’t the only TALARC station operating during Field Day. Ken, KY4KD, with the Wilderness Road Amateur Radio Club and American Legion Post 46 in Danville, Ky., sent us a link to the newspaper coverage they were able to generate at Post 46, courtesy of the Advocate-Messenger newspaper. This is a great example of the value in taking the time and effort to host and participate in this annual national event. Not only does it allow us to practice emergency communication skills, but it highlights The American Legion as a provider of local services and disaster preparedness in front of the community and its leaders. Very fine job by the members of Post 46."