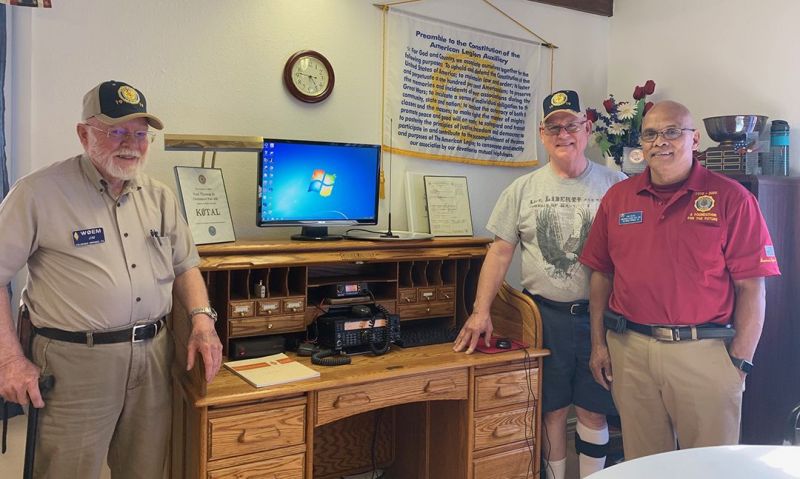 Update: Post 209 has installed antennas and accesories on the post roof and KOTAL was placed on the air Sept. 14. Contacts have been made via voice and digital modes.

Harris approached Commander Lino Calito of Neal Thomas Jr. American Legion Centennial Post 209 in Colorado Springs, Colo., about the idea of starting an amateur radio club at the post. Calito brought the idea to the post’s executive committee, who took a vote and approved the idea; as a result, Post 209 K0TAL was formed this past March. It’s the only TALARC club in the state of Colorado, and within about a 900-mile radius.

The club established a board with a president (Jon Davis, K0YOB), vice president, secretary, treasurer (Henry Russell, KC0NAJ) and director (Harris, W0EM), which meets at the beginning of each month to “decide where are we going, what are we going to do and how are we going to get there,” said club member Harvey LeCato, W1JU. There’s also a club membership meeting the second Thursday of the month that is open to Legion members who are hams or are interested in ham radio.

“We want to support The American Legion’s mission, and we want to support emergency communications and the local community,” Harris said. “One of our main interests to be in is the area of emergency communication, to assist local agencies with communication support during emergencies such as wildfires and inclement weather.” To help with this, club members will be visiting the El Paso County Emergency Center to see what they do, the equipment they have and how they use it, and “seek information from them as to how we can fit into their mission.”

Other ideas for the club include promoting The American Legion, sharing and expanding the hobby of ham radio, and supporting Scouts with their merit badges in radio, electricity and broadcasting. The club will soon host a Jamboree on The Air, where Scouts will visit Post 209 and see how members communicate with others in Florida, California or overseas. The club will also participate in Field Day, where they will take their radios out into the field with a generator or battery power and try to make as many contacts as they can in a specific timeframe.

Harris is working the network every Monday from his home with a radio, and the network is open to anyone who is licensed because “we want to draw them into The American Legion, into our group and into emergency communications,” he said. “So we grow our club, we grow our post. It’s a perfect fit.”

The radio station inside the post has the capability to communicate worldwide, and it’s available for Legion members to come in and operate. For Legionnaires who are not licensed by the Federal Communications Commission (FCC) to use the equipment, they can do so with someone who is. The club members all have radios at home; LeCato said anyone can get their FCC license, purchase a radio for $35 to $200, put up an antenna at their home and be on the air in 24 hours.

In coming months the club plans to have a worldwide network for amateurs from anywhere around the United States, and countries they have reciprocal operating agreements with, that can check in to the radio system and operate from their home Internet. “That will be a fabulous draw so far as bringing people into The American Legion and into our club,” Harris said. “We think that has a bright future to help us as well. During emergency communications guys can sit at home and use the radio from home to work emergency communications.”

Harris said that with assistance from the National Headquarters TALARC, Post 209 K0TAL was able to create its constitution and bylaws and receive guidance on other questions. “We didn’t just do it all within ourselves; we went for outside help from the experts,” he said. For information about starting a club post, getting an FCC license, ham radio events and more, visit www.legion.org/hamradio.

As Post 209’s amateur radio club continues to evolve its mission, Harris said one thing is for certain … K0TAL is here “to support The American Legion.”