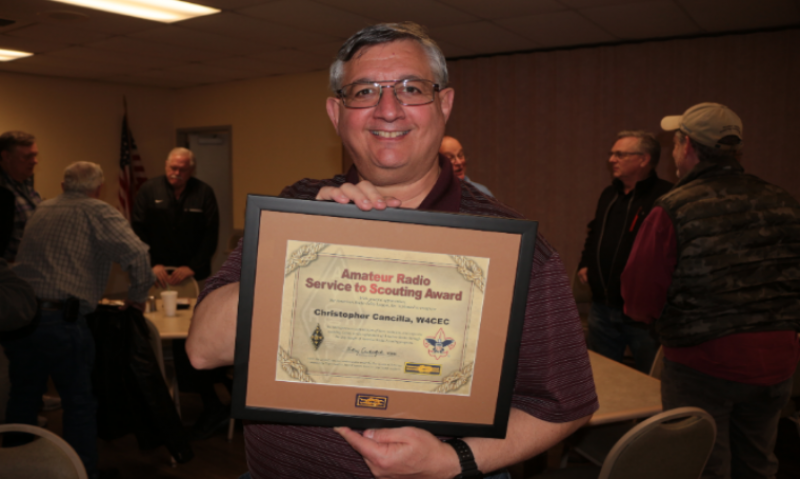 As reported in the most recent newsletter of The American Legion Amateur Radio Club (TALARC), a North Carolina Legionnaire has been named the recipient of an American Radio Relay League (ARRL) Amateur Radio Service to Scouting Award for his work in opening up the world of ham radio to Scouts.

Chris Cancilla (call sign W4CEC) is an Air Force veteran and a 10-year PUFL member of Walter E. Cole American Legion Post 187 in Wake Forest, N.C., as well as the post’s Scouting chair. He is also president of the post’s amateur radio club, WF4TAL. And in the community, he is founder and club president of the Occoneechee Amateur Radio Society (OARS), Scouting chair for the Franklin County Amateur Radio Club, and holds commissioner positions on the BSA Occoneechee Council. He was presented with the award by his ARRL section leader at a Franklin County Amateur Radio Club meeting.

Over the past year, Cancilla has held Merit Badge events, conducted licensing classes and test sessions, participated in Get on the Air and Jamboree on the Air (JOTA) events, and much more. He also keeps in the loop with connections to the K2BSA Amateur Radio Association (“considered the amateur radio station for BSA’s National Council, according to its website”), TALARC operating out of American Legion National Headquarters in Indianapolis, and the Department of North Carolina Amateur Radio Committee. And plans are underway for this October’s JOTA event – the largest Scouting event in the world.