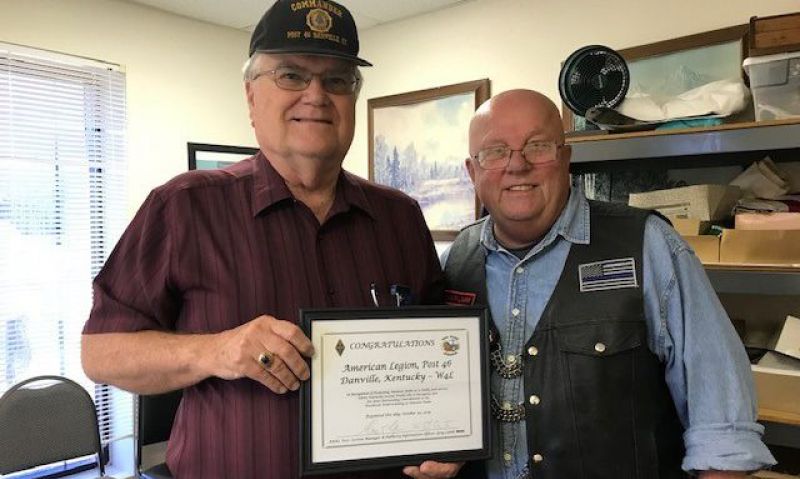 Tony Cromwell, commander of Boyle American Legion Post 46 in Danville, Ky., recently authored a report to his District 8 commander about how his post’s ham radio club has been helping other posts around it to start ham clubs of their own.

During a district meeting around the beginning of 2019, Cromwell gave an update on his post’s radio program; a story in CQ magazine from later that year describes how Post 46 gave a new home to a local ham club. Chris Gootee, commander of Nelson County American Legion Post 42 in Bardstown, also attended the district meeting although it wasn’t his own, and approached Cromwell afterward; he had hams at his own post.

“I always like to look around and see what interests the different members of the post may have,” Gootee said. “If we can do something that a few members are interested in, we try to get it started and then let them run with it to keep the program going. Starting up an amateur radio club was an easy decision.”

“We exchanged information and I asked our radio group to contact his members,” according to Cromwell. “That started an ongoing friendship with members of both groups visiting each other. As a result, they were able to establish a Post 42 amateur radio club, and they sign in to our D-Star nets.” Recently, Gootee himself obtained an FCC license and called in to one of Post 46’s regular nets. Cromwell, also a ham, greeted him and congratulated him on the new club.

“Having the amateur radio club as part of our post has … been a plus for us,” Gootee added. “It works as a recruiting tool for the Legion and our Sons. We hope to add an Auxiliary member to the radio club in the future.” Post 42 has gained a new Legionnaire, with another moving to Kentucky soon, and five new Sons members, as well as three more radio club members. Gootee concluded, “How can you go wrong when you grow your family?”

During the same period, Greg Lamb – a member of Moon Brothers Sons of The American Legion Squadron 275 in Independence, and a ham operator who is also an ARRL assistant section manager – presented Post 46 and its radio club with an ARRL state commendation stemming from the CQ article. Lamb discovered The American Legion through Post 46’s nets “Listening to the net I found at about the wonderful existence of the Legion Family. With that I found my local post, which is very involved in my community. I joined the Sons and my fiancée, also a ham and a Marine veteran, joined the Legion and we both joined the Riders.” When they were going to be in the area, a time was arranged to present the commendation and tour Post 46.

“We have become part of the Post 46 family – at least, that’s how they make me feel,” according to Lamb. “And they directly contributed to new American Legion members and now officers, and now forming our own TALARC club for Post 275!”

“These three posts have now established what I call a ‘sisterhood of posts,’” Cromwell said. “A warm, supportive, ongoing relationship that would not exist but for the radio activity.”