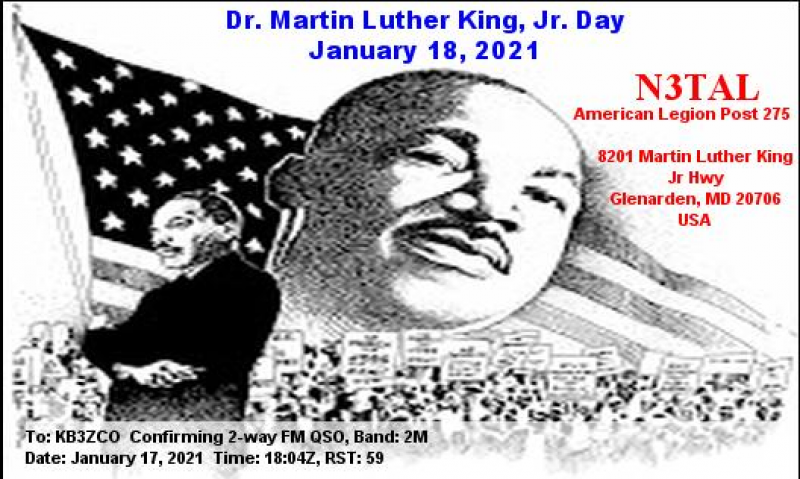 When leadership of The American Legion Amateur Radio Club (TALARC) announced the suspension of special event stations from National Headquarters in Indianapolis – to mark the “special events” of the Legion’s birthday and Veterans Day – they encouraged post ham clubs to conduct such events on their own. In that spirit, the amateur radio team at American Legion Post 275 in Glenarden, Md., conducted a two-day station Jan. 17-18 to mark Dr. Martin Luther King Jr. Day.

Mike Phillips KB3ZCO is secretary of the post team, which operates under the call sign N3TAL. “To the best of my knowledge,” he says, “an event station honoring Dr. King has not been done before by TALARC members.” Phillips and several other N3TAL members monitored several different access channels for three hours each day, from both the post and the members’ homes. Over the two days, 114 contacts with other ham radio users were made – “that’s pretty good for an event with limited advertising,” he says.

Special event stations often involve scripts read over the air by the operators when making a “CQ,” or general call for communications. It can include both current information and historical facts. Communications, or contacts, start by exchanging users’ call signs, names and locations. After that, Phillips and his fellow operators got more personal: “As the conversation begins we might mention Dr. King's legacy and impact on our lives today, for example. It all depends on the operator.” They also asked contacts about their Legion membership status.

"In my opinion, things went very well," Phillips says. "This feeling seems to be shared by the other participants as well." Contacts usually end with information on how to receive a memento of the communication – a “QSL” card created by the station putting on the event. Designs vary widely, and the Post 275 team made sure King was, appropriately, front and center.