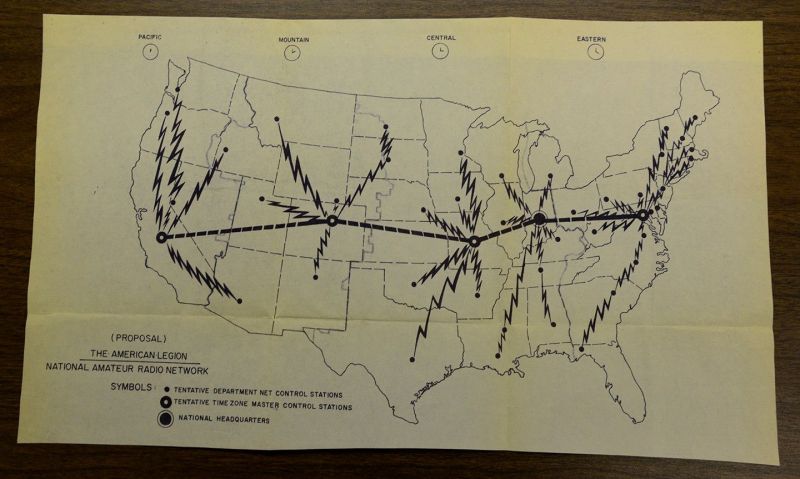 Ninety years ago, The American Legion’s National Security Commission encouraged posts to form amateur radio groups in support of civil defense. Posts across the nation became involved with ham radio at that time and the American Legion Amateur Radio Network was soon on the air. That "network," unfortunately, became all but obsolete by the 1960s.

The goal of serving the community figures largely in the life of The American Legion. As an organization, community service should be a mainstay for every post. There’s reference to that at the close of a post’s regular meeting when the commander reminds us: “Let service to the community, state and nation be ever a main objective of The American Legion and its members.” That was a precept of the organization when founded, and it’s still the basis for our existence almost 103 years later.

There are a number of examples as to how a Legion post can serve their community through amateur radio. One is found at Danville (Ky.) American Legion Post 46 in the partnership they formed with the Wilderness Road Amateur Radio Club. As a ham for over 40 years, TALARC member and then-post commander Tony Cromwell chose to offer aid to this local club that lost its home in a neighboring building. As commander, Cromwell recognized the ability of his post to host the organization, gain membership and advance everyone’s mission. That realization led to the Wilderness Road club becoming a post-approved activity. “A valuable community asset was rescued and will now go forth as an American Legion post resource in providing emergency communications support during natural disasters,” he noted.

As recognized by Cromwell and Post 46’s membership, establishing a club is vital to expanding and extending Legion volunteer services throughout a community. First, however, is the need for eligible individuals to come together as an American Legion Amateur Radio Club with sanction from their post’s leadership.

Ham radio is an interesting and enjoyable hobby as well as an invaluable resource “when all else fails.” When severe weather, natural disasters or other catastrophes strike and power lines and cellphone towers are knocked out, ham radio has always stood up to serve communities across the nation. There is also a more relaxed, more visible and more regular use for amateur radio, and it’s done through augmenting communications and safety efforts during parades, marathons, outings and other public or Legion-sponsored events in your area. These occasions are just a few of many things for a post and its members to dwell on when considering support for an American Legion Amateur Radio Club within a post. The possibility of bolstering the post membership roster is also something to take into consideration.

For more information about TALARC, amateur radio, how to acquire an FCC license or to join the American Legion Amateur Radio Club, browse the TALARC website at www.legion.org/hamradio. To see a current map of American Legion ham radio clubs, click here.