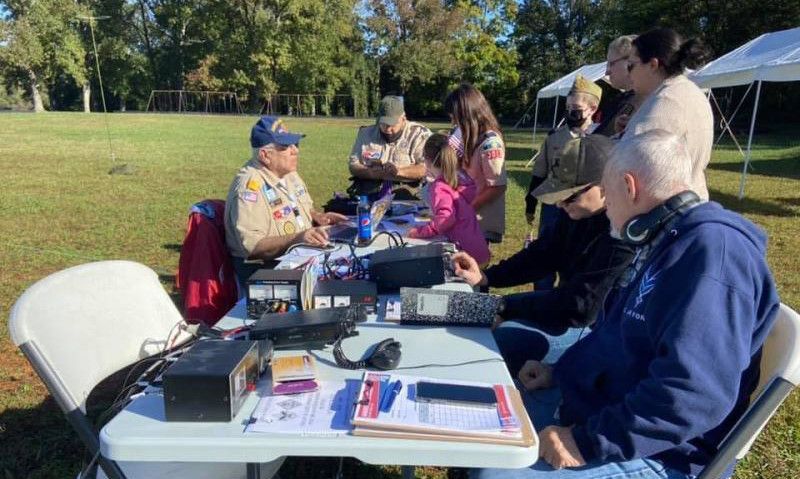 The Post 289 radio club, with Larry Johnson, helps out with JOTA 2021. (Photo via Ernest A. Schmidt)

The American Legion Amateur Radio Club (TALARC) provides both a hobby and emergency communications “when all else fails.“ TALARC was added as one of our CSM Gary W. Crisp Post 289 programs in Clarksville, Tenn. According to Commander David Zeveney, in May 2011 The American Legion National Executive Committee added the radio program; but before that, in January 2005, the Legion signed an agreement with the Department of Homeland Security to support emergency disaster preparedness. Subsequently, the Disaster Preparedness Booklet was made available to posts. Amateur-radio support was an integral entity.

It's been a while in getting started. Larry Johnson, a local Legionnaire and amateur radio operator, was instrumental in making this process happen. We at Post 289 are proud to have our own Clarksville American Legion radio club.

Membership is open to all American Legion, Sons of The American Legion and American Legion Auxiliary members from any Legion post in the area who have an amateur radio license. Our call sign is KC4TAL and our radio club meetings are on the fourth Wednesday of every month at 6:30 p.m., at 726 Gardendale Rd, Clarksville, Tenn. This club is a non-commercial association of persons, organized for the promotion of interest in amateur radio communication and experimentation and education, for the establishment of emergency communications in the event of disasters or other emergencies, for the advancement of the radio art and public welfare, and for the representation of the radio amateur in legislative matters. Most of our members started with the Clarksville Amateur Transmitting Society (CATS) club and it was the natural thing to do get our own club up and running. Are you a licensed ham operator or interested in becoming one?

Our radio club is currently set up to host the Boy Scouts National Jamboree on the Air and on the internet, along with help from the Clarksville Amateur Transmitting Society, on Oct. 15, 2022. This program is run like a camporee; we set up outside Troop 525’s Scout building at the Civitan Building behind Byrns Darden Elementary School, establish radio stations and attempt to communicate with any other Scout Jamboree stations on the air.