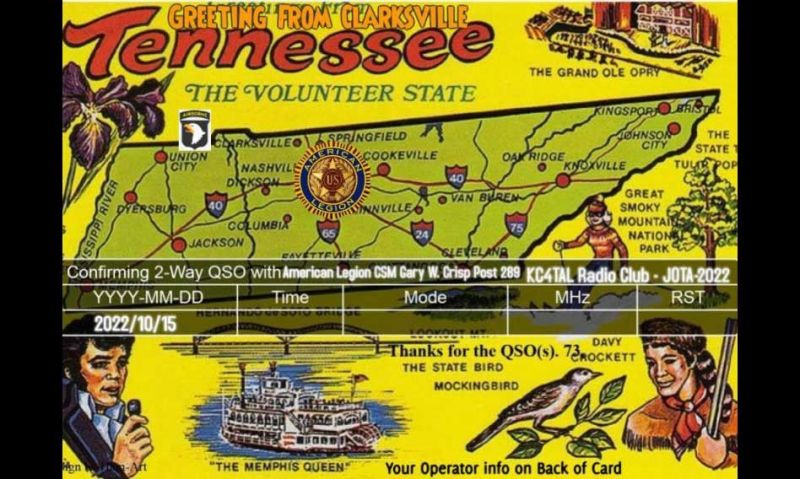 Jamboree-on-the-Air, or JOTA, is the largest Scouting event in the world. It is held annually on the third full weekend in October. JOTA uses amateur radio to link Scouts and hams worldwide, around the nation and in our community. This jamboree requires no travel other than to a nearby amateur radio operator’s ham shack or, in this case, to the Troop 525 Scout Hut, also known as the Civitan Building off Preacher Mill Road in Clarksville. “All Scouts from any Council are welcome to come and participate in this Cogioba District event,” stated Ernest Schmidt, American Legion Tennessee State Scouting chairman.
They will also be hosting Jamboree on the internet at the same time, so participants will get credit for taking part in two events. Scouts of any age can participate, from Cub Scouts to Scouts BSA and Venturers. Once at the JOTA ham radio station, the communication typically involves talking on a microphone and listening to the station speakers. However, many forms of specialized communication may also be taking places, such as video communication, digital communication (much like sending a message on your smartphone but transmitted by radio), or communication through a satellite relay or an earth-based relay (called a repeater). The exchanges include such information as name, location (called QTH in ham speak), Scout rank, age and hobbies. The stations you’ll be communicating with can be across town, across the country or even around the world! The World Scout Bureau reported that the 2017 JOTA-JOTI had over 1.5 million Scout participants from more than 160 countries. Once you have completed your stations, you may leave. You do not need to stay all day.

Jamboree-on-the-Air and Internet will be held on Saturday, Oct. 15, from 9 a.m. to 3 p.m. This year the American Legion CSM Gary W. Crisp Post 289 Amateur Radio Club and the Clarksville Amateur Transmitting Society will be hosting this event. The Clarksville city team will have folks operating three radio stations this year. The event starts Friday evening during the JOTA Jump Start and runs through Sunday evening, but the Clarksville JOTA will only be hosted on Saturday. To participate, contact the Post 289 Radio Club or a local ham radio operator, or a local amateur radio club.