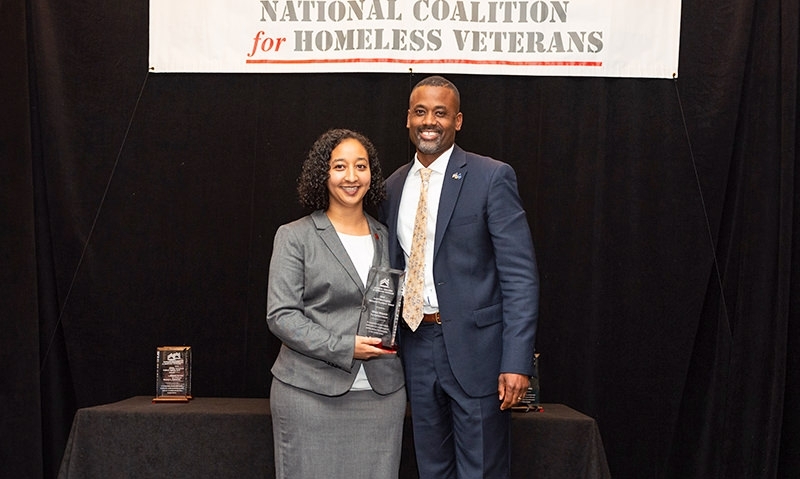 Mark Walker, American Legion deputy director of Veterans Employment and Education Division, was awarded the Jerald Washington Memorial Founders’ Award on May 31, in a ceremony at the National Coalition for Homeless Veterans (NCHV) annual conference in Washington, D.C.

The award is presented to an individual who “embodies the spirit of service and sacrifice” displayed by the award’s namesake, the award is the highest honor given in the homeless veteran assistance community.

A veteran of the U.S. Air Force, Walker has dedicated his career at The American Legion to bettering the lives of America’s veterans.

“It is no exaggeration to say that he is responsible for the great interest and deep commitment to addressing veteran homelessness that American Legion expresses,” states the award citation.

Walker has travelled the country advocating on the behalf of the homeless veteran population, encouraging others to look at homelessness as a priority. He has been instrumental in securing the passage of resolutions that enable the Legion to advocate on behalf of homeless programs.

“Mark Walker has dedicated his professional career to ensuring that veterans are afforded every opportunity to overcome homelessness,” said Louis Celli, American Legion executive director of Government and Veterans Affairs. “He has worked extensively with ’at risk‘ veteran populations, and is a trusted advisor to local, state and federal leaders as they develop and implement programs designed to support veterans who need help finding permanent housing. Mark deserves this prestigious recognition and The American Legion is proud to stand behind Mark as he receives this award.”

The award is named after Jerald Washington, a Vietnam veteran, who returned home to Tennessee following the war and dedicated the rest of his life to serving veterans, especially those who had difficulties returning to civilian life. Washington served as one of one of NCHV’s leaders until his death in 2001. Other recipients of the award include Barack Obama, Michelle Obama, Dr. Jill Biden and former VA Secretary Eric Shinseki.