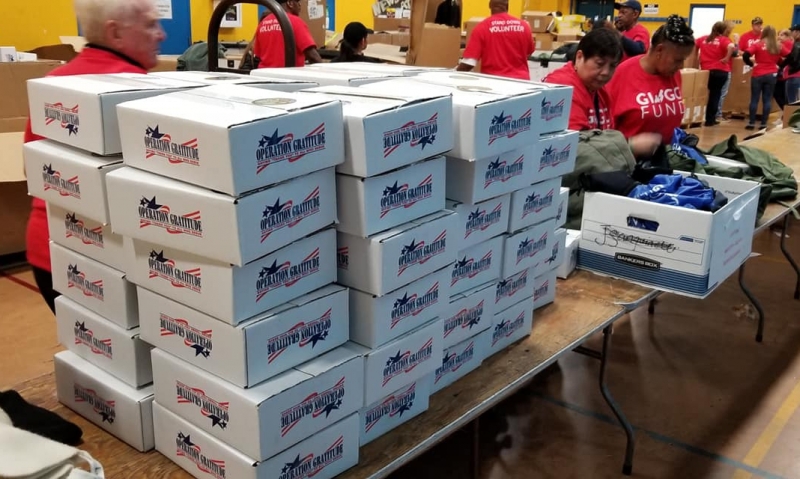 The care packages were made available by Operation Gratitude, which annually sends more than 300,000 care packages to servicemembers deployed overseas, to their children here at home, and to first responders, new recruits, veterans, wounded heroes and their care givers.

Bob Looby, the employment and education chairman for the Department of New Jersey, also serves on Operation Gratitude’s BRIDGE Council, whose aim is to bridge the divide between civilians and servicemembers.

“(Operation Gratitude CEO Kevin Schmiegel) contacted me about six months ago to be on the board,” said Looby, who worked with Schmiegel in his previous position at Hiring Our Heroes to set up the first HOH job fair in Toms River, N.J., after Hurricane Sandy. “Our immediate answer was yes, there’s a great opportunity there.”

Conversations between the Legion and Operation Gratitude showed that the latter’s care packages would be a help to stand down events like the one in Newark, which is the oldest and largest veterans stand down in New Jersey and is managed by the GI Go Fund. Looby is on the event’s planning committee.

“They rushed out a couple pallets of their care packages” for the Oct. 13 stand down, Looby said.

He said the care packages are “another tool in our toolbox to help the homeless.”

Looby said care packages will also be distributed to 2,100 troops from New Jersey who will be deploying in January, and they’re working to offer packages to state troopers as well.

“One question from Kevin (led to this),” Looby said. “Now we’re going to spread the wealth.”