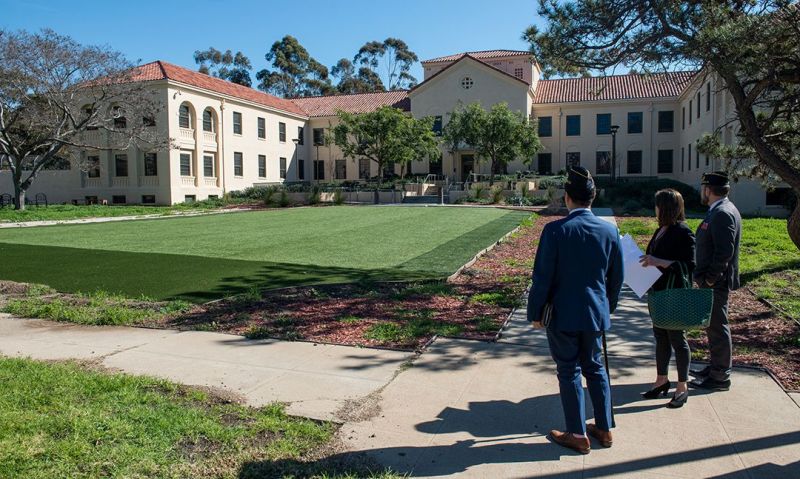 More than three years after settling a lawsuit over the misuse of its West Los Angeles campus, VA may finally be on track to provide housing, mental health treatment and other assistance to at least 1,200 homeless and disabled veterans on the 387-acre site. However, 490 units of housing won’t be ready next year as the settlement dictated.

“We knew the VA would have some struggles executing this,” says Chanin Nuntavong, director of The American Legion’s Veterans Affairs & Rehabilitation (VA&R) Division. “This is a drastic improvement where they were before,” he says, referring to the last site visit by representatives from The American Legion’s Washington, D.C., office in 2017.

“Our members were concerned about what was taking so long,” Nuntavong says of the visit to campus. “I wanted to meet with the leadership here and see what’s going on so I can better inform our leadership.”

Nuntavong and Butler credit Flanz, who has only been at the West Los Angeles VA since January 2018, for the progress the agency has made in West Los Angeles. “I think they are headed in the right direction now that Meghan is here,” Nuntavong says. “She has a very good grasp of what’s required.”

However, Flanz needs a project manager, a budget specialist and other staff to help her manage the massive project, Butler says. “I would hate to see her burn out because she’s a one-person team,” Nuntavong adds.

Flanz provided an upbeat picture of VA’s progress, including the selection of an experienced private development group to renovate existing buildings and construct new housing for veterans in need, part of a plan to return the West Los Angeles VA property to its original mission. Known as The West Los Angeles Veterans Collective, the development group includes the construction arm of Century Housing, Thomas Safran & Associates – which specializes in financing and managing low-income housing – and U.S. VETS, which provides housing, employment and mental health services for veterans.

Yet, Flanz also acknowledged VA won’t live up to its pledge to open 490 units of permanent supportive housing for women, elderly, and physically and mentally disabled veterans by next year, a shortcoming the agency’s inspector general highlighted in report last September. That optimistic promise, part of an agreement to settle the lawsuit over illegal leases that allowed private businesses to operate everything from a hotel laundry to charter bus facility on the West Los Angeles campus, didn’t account for the comprehensive environmental review of the campus redevelopment required under federal law, she says.

The VA Inspector General also criticized leases West Los Angeles VA signed with Brentwood School – which has its athletic facilities on the campus – and other private entities after a federal judge invalidated earlier agreements with some of the same entities. VA has until September to respond to the Inspector General’s findings – some of which the agency disputes.

Still, Flanz understands the frustration with the pace of housing development at West Los Angeles VA. She expected to see extensive housing construction underway when she transferred from the VA’s Washington, D.C., offices to Los Angeles a little over a year ago. But once the environmental impact study and a strategic plan are completed in mid-summer, VA should be ready to move ahead.

There are other obstacles. Flanz anticipates that some residents of the upscale Brentwood neighborhood adjacent to the West Los Angeles VA, will file a legal challenge to the traffic study even though the bulk of the future new residents of campus are homeless and don’t own cars.

Nuntavong understands the neighbor’s concerns. “It can be scary when you see the type of community that the West Los Angeles VA is in, and know that they want to bring in those who are less fortunate,” he says. “But these veterans have served their country. It’s our duty to take care of them, rehabilitate them and get them back into society as contributing members.”

Vets Advocacy Inc., the nonprofit partner established to help VA under the terms of the settlement agreement, sees Flanz’s appointment and VA’s decision to hire The West Los Angeles Veterans Collective – the development group with expertise in low-income housing – as the first signs that the West Los Angeles VA homeless project may come to fruition. “After a couple of years of basically failed efforts to get started, the VA finally did two things that have at least started to turn things around,” says Gary Blasi, of Vets Advocacy Inc., and one of the attorneys who represented veterans in the lawsuit that challenged VA’s mismanagement of the West Los Angeles campus. “I don’t think that progress is all we hoped it would be. It’s just painful how much wreckage has occurred to veterans living on the street since this began.”

Vets Advocacy provided VA significant help getting the project back on track. It hired the design firm of Johnson Fain to complete the draft master plan for redeveloping the campus, which had stalled under VA’s oversight, Blasi says. Then VA Secretary Robert McDonald approved the plan, which cost about $250,000, in January 2016.

But more than three years after the settlement, VA is only providing permanent supportive housing to 54 veterans in what’s known as Building 209. And renovation of building 209 began well before the lawsuit settlement and required an act of Congress to complete, Blasi says. “The maddening thing is, Building 209 was part of a master plan drawn up about 10 years ago – and they haven’t even gotten to putting concrete on the ground under the new master plan,” Blasi says.

There's also no clear way of funding roads, utilities and other infrastructure, says Dan Garcia, CEO of Vets Advocacy, a Vietnam veteran who has served as president of both the Los Angeles Planning Commission and the Los Angeles Redevelopment Commission. That’s critical to success.

“The internal road and sidewalk network, the vehicular and pedestrian access and egress from the campus, the utilities, network data cable installations, sewage installation and connections and related infrastructure are necessary to turn the campus into an integrated veteran community as we have envisioned,” says Garcia, whose private career includes serving as senior vice president and chief compliance and privacy officer for Kaiser Foundation Health Plan and Kaiser Foundation Hospitals. “Without it we could have isolated pockets of housing.”

Meanwhile, VA says it will complete renovation of three additional buildings by the end of 2021 that will house approximately 120 veterans. That’s possible in part because the project was planned prior to the legal settlement and the environmental impact statement has already been completed. Following that, the first new housing is planned for an area of the West Los Angeles VA campus known as MacArthur Field, which is currently used by Los Angeles area soccer leagues.

VA’s also building a new columbarium that will provide niches for 90,000 veterans and families. The national veteran’s cemetery across the road from the West Los Angeles VA – where Flanz’s grandfather is buried – has long been closed to new internments, says Flanz.

"This effort means a lot to veterans," Nuntavong says. “It brings joy to my heart knowing veterans and loved ones will have this."

Nonetheless, the agency is a long way from meeting its historic obligations in Los Angeles County, which has the highest concentration of homeless veterans in the United States. The West Los Angeles VA was built on land given to the federal government in 1888 for the express purpose of housing disabled veterans. At its peak, the campus was home to about 4,000 veterans, a post office, churches, theaters and a 10,000-volume library. VA quietly ended that service during the Vietnam War, effectively pushing mentally disabled veterans to the streets. Meanwhile, the agency leased more than 100 acres of the West Los Angeles property for a dog park, charter bus storage, a private school’s athletic center, a hotel chain’s laundry and UCLA’s baseball stadium among other private endeavors. Millions of dollars in proceeds from those leases is still unaccounted for.

The litigation was set to resume when then VA Secretary Robert McDonald initiated successful settlement discussions in 2015. The agreement calls for VA to provide permanent supportive housing, free legal assistance, family counseling and innovative mental health treatment. Women, older veterans and the most severely physically or mentally disabled veterans are supposed to get priority access to the permanent housing on the campus.

The American Legion wants to help VA finish this difficult job. “We will continue to keep an eye on the execution of this plan,” Nuntavong says. “The bottom line is this. We believe in the VA. We need to give them more time to make things right. And we will provide them with whatever help they need to better assist our veterans.”