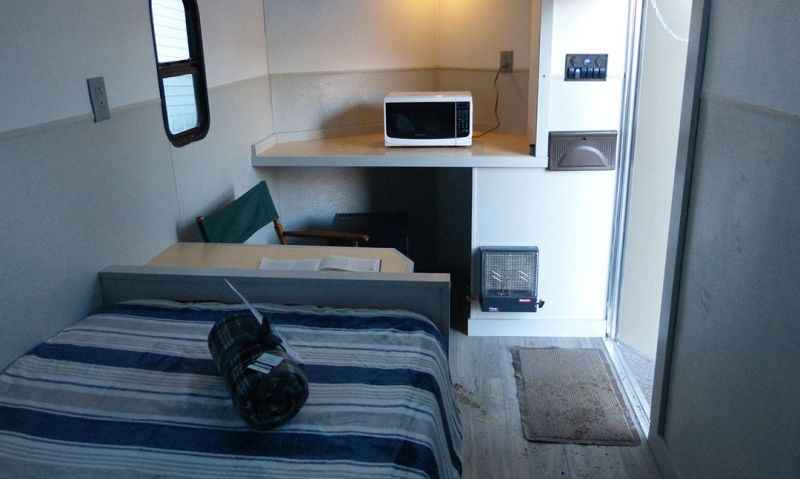 American Legion Past National Vice Commander John Hargreaves says there are approximately 100 identified homeless veterans in Maine on any given night. Of those, approximately 10 have reached out to a local or state agency about housing options but have yet to be placed somewhere.

It’s that second group that raised the concerns of a group of Legionnaires at Hargreaves’ post, Charles E. Sherman Jr. Post 36 in Boothbay, and has led to what could end up being a short-term solution for veterans needing to get off the street immediately.

Ed Harmon, a member of Charles E. Sherman Jr. Post 36, where he is a service officer and the commander of Sons of The American Legion Squadron 36, came up with the idea to convert a cargo trailer into a temporary residence for veterans in between applying for housing and being placed in some kind of residence. He and fellow Post 36 member Arthur Richardson, who has an electrical license and a background in carpentry, teamed up to build a prototype that the pair hope will become the first of many such trailers throughout the state.

Harmon said that he attends various meetings with other veterans service organizations, and state and local agencies, where he “kept hearing about the lag time on paperwork” for homeless veterans looking for immediate housing. “They’re still sleeping on the street, in a car or under a bridge. How do we resolve this?” Harmon wondered.

Post 36 Commander David Patch attended many of the meetings with Harmon, where they started to understand “what was missing,” in housing homeless veterans, Patch said. “To add to that, just a few months ago we had a homeless veteran who was in his car. We saw firsthand what the problem was. And following that veteran, we had a local veteran who ended up passing away in his sleeping bag alongside the railroad tracks. So we had the understanding what the problem was academically, if you will, and then we saw it and experienced it firsthand.”

Harmon already was in the business of retrofitting campers for use by veterans, and that prompted the idea that “why don’t we build something that’s temporary (so) that they can survive?” Harmon said. “Get them out of the cold. Get them horizontal. Give them some heat. Give them some hope. So that’s how it developed. Seeing the plight that’s been going on, I couldn’t take it anymore.”

He and Richardson went to work on a cargo trailer that Harmon had purchased, insulating it, lining the inside walls with fiberglass-reinforced plastic, and providing the trailer with LED lights and heat rated at 99.9-percent efficiency. The trailer has a bed, nightstand, end table, chair, microwave and refrigerator. The heat and electricity in the trailer is powered by plugging the trailer into a regular electrical outlet located outside of a home.

The Veterans Emergency Temporary Shelter (VETS) is intended to meet a need for “those veterans who are in that limbo between contact with an agency and actual placement in temporary transitional housing,” Hargreaves said. “A lot of times on weekends they call, they walk (into a homeless shelter) and there’s no beds. And they have to vet those veterans and there’s nobody to call and check. The veteran is back in his car or under the interstate, wherever. The intent is that these (trailers) are located in places where the agency can put them directly in (the trailer) for two or three days, or maybe a couple weeks. We’re looking at 12 or 13 units for the state of Maine probably. Maybe more. But that also depends on who can take them and who can provide the services.”

Harmon said he and Richardson will “build as many of these as we can get money for and send them around the state.” Over the next few months members of Post 36 plans to work with VA, the state and other organizations involved with the homeless population in Maine to create a process for making the trailers available to those entities assisting homeless veterans.”

Getting the word out about the efforts of Post 36 hasn’t been a problem. “(In Maine), this project is probably known by every organization that deals with homelessness, including the (Department of Veterans Affairs) and the state of Maine,” Patch said. “Visibility in the state right now is not a problem.”