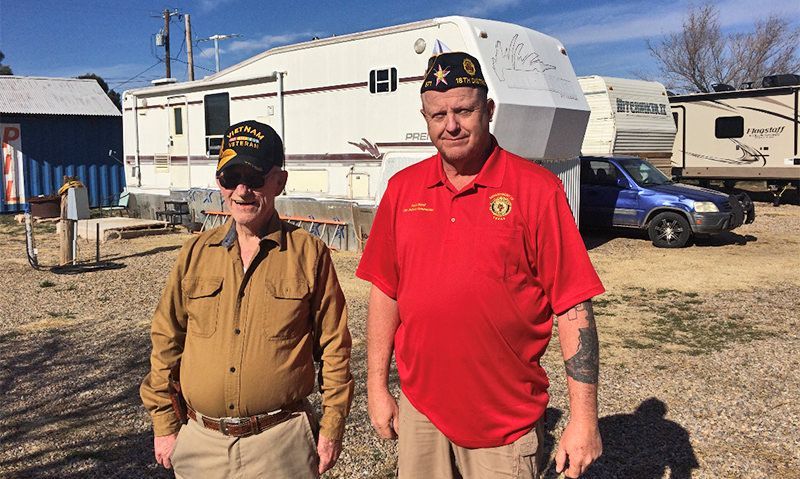 The RVs are used to provide housing for veterans who have slipped into homelessness for various reasons. It was three years ago that Black first helped a Korean and Vietnam War veteran who had lost both his house and wife within two weeks. “Literally he had nothing but his car and his Chihuahua,” said Black, the current commander and a Paid-Up-For-Life member of Post 671.

An apartment was arranged for the veteran in Amarillo, but Black said the man hated living so far away. “So I just asked him, ‘Would you mind living in an RV if I built an RV park?’” Black said. “Literally a month later we had him in an RV, and it’s just cascaded from there.”

Black has since moved in two more veterans into two other RVs on his property. “We’re hoping this year I’m going to get anywhere from 67 to 200 acres donated to us,” Black said. “If that happens, we’re going to build a bigger RV park where we can bring in the public and help grow with this.”

The project recently was featured on ABC7 News as part of its new feature “Invisible”, which is a weekly effort to raise awareness about the homelessness issue in Amarillo and in the Texas Panhandle. It’s helped bring Post 671’s efforts more into the public eye, with Black saying there is potential for a large grant and the possibility of building tiny homes for veterans on any donated property.

“If we get the right property, we may even build a new (post facility),” Black said. “We’ve got a lot going on.”

The RVs, Black said, have the ability to provide an immediate answer to a veteran facing homelessness. “A true homeless person cannot get benefits because they don’t have a physical mailing address,” he said. “This gives them that address.”

Black said that veterans who struggle transitioning into the civilian world can see other problems, such as post-traumatic stress disorder, amplified. The goal with Post 671’s project is to help alleviate that stress while working with both the Department of Veterans Affairs and the Veterans Resource Center in Amarillo.

“Most of the people at the VA, the service providers, we have each other’s phone numbers and message each other seven days a week, it seems like,” Black said. “This is working great so far. It’s just something we can do here in our community."