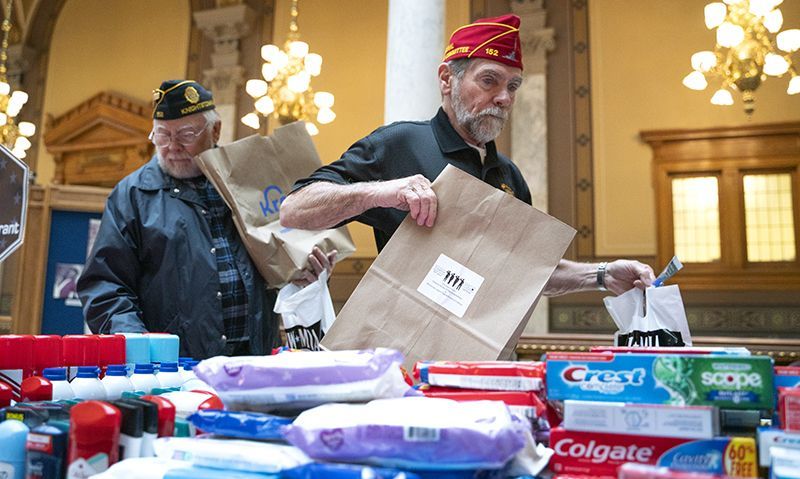 Data from the Department of Veterans Affairs shows that the homeless veterans population in the state of Indiana has increased by 6 percent in the last year. As a result, anywhere from 300 to 400 homeless or at-risk veterans visit the food pantry at the Hoosier Veterans Assistance Foundation (HVAF) in downtown Indianapolis every month.

Together, the American Legion Department of Indiana and state lawmakers are helping those veterans in need by creating 500 care packages filled with non-perishable food and toiletries.

“Who better to take care of homeless veterans than veterans who understand the struggle when you transition out of the military, essentially leaving behind your second family, and you have to recreate yourself and assimilate back into civilian society,” said Department of Indiana Adjutant John Crosby.

The Helping Our Hoosier Heroes Donation Drive brought Legion leadership and Legion Family members from across the state to the fourth floor of the Indiana Statehouse the morning of Feb. 10 to fill grocery bags with the 3,000 care items stacked on tables. HVAF will be one of four shelter destinations to receive the care packages for homeless veterans statewide.

“This is coming at a really great time for us because our donations are down for the pantry and demand is high,” said Ashlee Walls, vice president of Advancement at HVAF.

The opportunity for the Department of Indiana and state lawmakers to work together arrived when homeless veterans issues became the charitable cause for the House legislative year.

“We are just overwhelmed by the service of Hoosiers to our nation. So policymakers want to do everything that we can to help support those who served our nation and served our state as well,” said Speaker of the Indiana House of Representatives Brian Bosma. “We all understand the importance of encouraging that (military) service and supporting our veterans. So we were thrilled that The American Legion of Indiana stepped forward and said, ‘We’ll help you with this.’”

Donations for the care packages poured in from the Legion Family, lawmakers and community. “There’s been a lot of community effort come together for this,” Crosby said.

As House Democrats and Republicans came out of legislative session, Legionnaires walked around the tables with them to fill grocery bags, discuss homeless veterans issues and get their picture taken.

“They appreciate what we stand for, what we do, what we’ve done and they want to help us help others,” said Tommy Goul, a Desert Storm Air Force veteran and member of Post 437 in Selma, Ind. “Anytime we can give back to veterans is great. And anytime I get a chance to be a part of this, I’m all in for it.”

The homeless veterans initiative at the Statehouse also served as an opportunity for members to discuss American Legion initiatives, legislative priorities and membership. Indiana American Legion 10th District Commander Ron Patterson spoke with Rep. Steve Davisson’s about the need for more county service officers to help veterans with their benefits claims. Crosby said currently the Department of Indiana represents about 63,000 of the 85,000 service-connected disabled veterans with claims.

“These care packages will help (the homeless veterans) for a few days, but the bigger idea here is that we get them in touch with a service officer and show them that there is help out there to get off the street and get rehabilitated,” Crosby said.

During their conversation, Patterson learned that Davisson’s son, Jay, is a disabled veteran of the Iraq and Afghanistan war who currently is a full-time caregiver for his wife who has a terminal brain tumor. Patterson extended the invitation to invite Jay and his wife into the Legion Family by paying for his dues. “We will help take care of him,” Patterson said.

“A lot of good things are going on here,” said Department of Indiana Commander Allen Connelly. “(The Helping Our Hoosier Heroes Donation Drive) really helps to shine a light on the veteran community and problems with homelessness.”