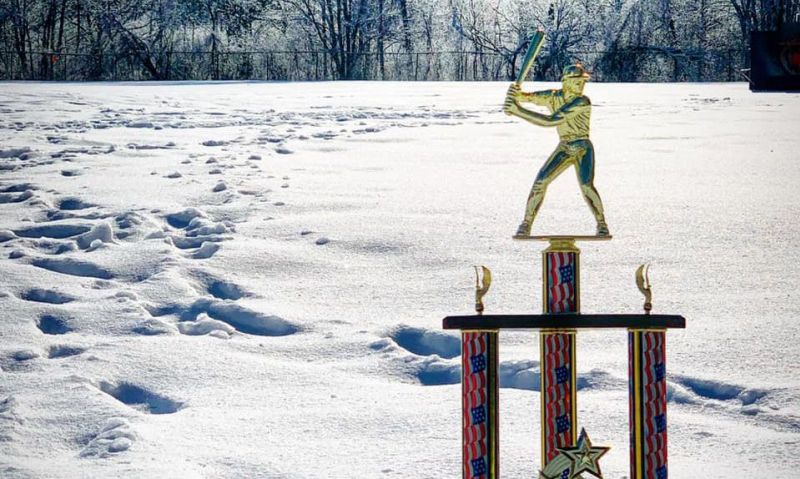 On Feb. 22, the field behind Corey E. Garver American Legion Post 202 in Topsham, Maine, is again covered in snow. And for the sixth straight year at this time, the field will be host to several area softball players.

Post 202’s Winter Softball Classic will bring together teams from American Legion posts, churches, traveling teams and elsewhere, all to raise funds for programs that are focused on eliminating veteran homelessness in Maine. Planning for the event begins in September and includes the post's entire American Legion Family.

The event is the brainchild of former Post 202 Commander Nik Hamlin, who helped turn things around in Topsham in 2013 and has since transferred to American Legion Post 158 in Lisbon to be closer to home. He said Maine’s brutal winters tend to slow activities down at the post. Finding an activity to draw in the community, as well as tackling an issue close to Hamlin’s heart, are what led to the idea.

“There’s not much to do (in the winter),” he said. “On the other side of the coin, my father was a veteran. My father committed suicide, and so throughout my life I have tried to (raise) veteran suicide awareness. I thought … ‘how can I attack this problem?’ Homelessness is probably something I can do something about. It’s another tool in the tool box. It’s not the end-all, but it’s in the right direction.”

That prompted the idea of the Winter Classic, with the goal to raise funds for programs in the state that directly deal with veteran homelessness. Initially met with “you’re crazy,” Hamlin said the idea – and then the event – eventually became very popular.

Three teams participated in the first year’s event; so far, seven or eight teams have registered for Saturday’s event, “with the possibility of 15 teams,” Hamlin said. The first event raised $400, while last year’s brought in around $1,500. Each team is paying $200 to participate this year, so Hamlin is expecting to raise even more funds.

Temperatures are expected to top out in the high 30s for this year’s event, while games have been played in deep snow in previous years. The event uses a double-elimination format with six inning games; each batter steps up to the plate with two strikes.

A trophy is presented to the winning team, but neither the cost of the trophy, nor the costs for balls or any other equipment comes from the money raised.

This year’s event will include a special guest in Silhouette Project founder Linda Lajoie, who will throw the ceremonial first pitch. The Silhouette Project consists of 22 life-sized military silhouettes, each bearing the name and picture of a veteran or active-duty military personnel lost to suicide. The Silhouettes are free to any nonprofit organization that offers services to veterans.

The Cub Scouts will sing the national anthem, while representatives from the area Vet Center, and the Department of Veterans Affairs’ suicide-prevention team and OEF-OIF transition team also will be in attendance.

“We’re making it educational, too for our community about everything veteran-related,” Post 202 Commander Nancy Laffin-Gillespie said. “This is probably the biggest thing that we do."

Laffin-Gillespie has been a member of The American Legion for 10 years but transferred to Post 202 around two years ago after Hamlin and the others had turned things around. When she heard about the post hosting a softball tournament in the dead of winter, she thought the idea was “genius. It’s kind of hilarious to think about it. It’s fun. But the point that it comes across with is that people are living out here in the cold, and here we are having fun playing in it. I think it was just a great idea, and I’m glad we’re able to continue it.”