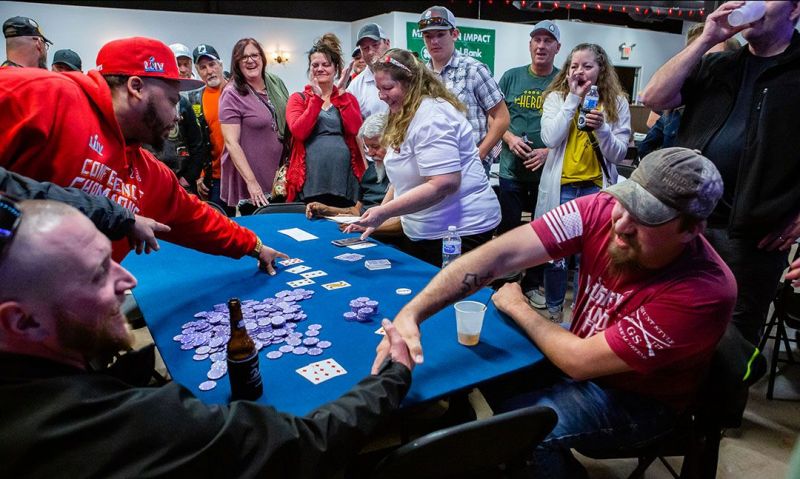 District 2 Kansas American Legion members are a testament to what can be accomplished by working together for a common purpose. In 36 months, they have raised nearly $103,000 for the Kansas City-based Veterans Community Project (VCP) to aid in its mission of ending veteran homelessness through the building of tiny homes and onsite resource assistance. Of those funds, a check for $54,516 was presented to VCP during the recent fourth Hold ‘Em for Heroes charity event.

“Everything we do … it’s an American Legion Family event because it takes a group to do something like this,” said Jeremiah Bull, founder of Hold ‘Em for Heroes and senior vice commander of LeRoy Hill American Legion Post 19 in Gardner, Kan. “We created a fun product for everybody to enjoy and get behind. It’s a fun time for a great cause.”

“(The Hold ‘Em for Heroes event) is the American Legion Family, it’s the veterans community, it’s Kansas City,” said Vincent Morales, co-founder of VCP and member of Post 19. “America wants to give back, even more than just say thank you for your service. People want to help out veterans in a more robust way. And this is the power of it. This is the proof of it.”

Before doors opened at 1 p.m., donations had already surpassed last year’s overall total of $34,000 thanks to sponsors and donors.

That number was then followed by more than $17,200 raised in seven hours at the VFW. There, eight tables housed about 80 poker players who paid $50 each to partake in the tournament. While poker tournaments were underway, other attendees conversed and ate unlimited tacos for $10, met representatives from the veterans organizations, listened to live music from Aaron Lucero, put their names in raffle drawings, played 50/50, purchased Hold ‘Em for Heroes shirts where a portion of proceeds went back to the cause, bid on auction items and honored Stephen Traglio, who Bull served two years with in the Kansas National Guard. He passed away in February 2015 of brain cancer.

“We are honored that this is happening in the great state of Kansas,” said Department Commander R.C. “Chuck” Shoemaker. “They (poker players) may lose a little bit of money, but they know every bit is going to a great cause.”

The beginning to now

Feb. 13 is Bull’s birthday. Three years ago he threw his own party at Post 19 with about 50 of his military buddies and friends from work at Pipe Fitters Local 533. They played Texas hold’em – a card game Bull played with his fellow Army soldiers while deployed to Iraq twice, between 2004-2008. He also cooked chili dogs, spent his own money on door prizes, and through Facebook found a veterans organization – VCP – to donate the $1,500 raised.

“We saw (VCP’s) mission and (Post 19) wanted to get behind it,” said Bull, who now serves in the Kansas National Guard.

For the second event, Bull connected with Sons of The American Legion Squadron 19 member Robert Carver and raised $12,268 for VCP. “The success of this event I think comes from the pride Post 19 had in the first two events when it was not too big to hold at that post,” said Carver, COO of veteran-owned Retirement Solutions Group. “They are the cornerstone that really pushes this thing. And it’s all four groups (Post 19 Legion, Sons, Auxiliary and Riders).”

Bull reiterated that it is “a full American Legion Family event.”

Morales personaly accept the second VCP check at Post 19. It was then that he and Bull realized they were deployed together in Iraq. The same realization happened when they met Justin Hoover, executive director of The Battle Within, which provides PTSD and suicide prevention healing for veterans and first responders. Bull, Morales and Hoover all served in the same Army brigade and deployment in 2004-2005.

“This (Hold ‘Em for Heroes event) is therapy,” Morales said.

With the goal to build upon what was accomplished with the first two, the event outgrew Post 19 by its third going. So Post 19 connected with District 2’s Earl Collier Post 153 in Olathe, Kan., where together they raised $34,000 for VCP.

“As everybody sees the event, they see what we’re able to do and they want to get on board and support our efforts,” Bull said.

Post 19 members visited other posts in District 2 for support, which proved successful. The relationship-building is what led Post 19 to host the fourth Hold ‘Em for Heroes with District 2 American Legion Family and VFW Post 6654. District 2 Vice Commander Jeffrey Barber, a Gulf War Army veteran, played a huge role in getting the 24 posts on board. For him it wasn’t a difficult cause to get on board with because he “loves the camaraderie” the event boasts.

Support for the cause

With 30 volunteers, planning and fundraising for this February event got underway just last October. For four months, “it’s just hustle; 210 hours of volunteer time each,” Bull said. And to make it successful, Bull added that it’s about creating relationships with sponsors and donors so you can count on them to continue donating every year to the cause.

“People are really excited to get behind it,” said Kristy Harrison, an Air Force veteran of Desert Storm and a dual Legion and Auxiliary member of Post 19 who coordinates the sponsors. That excitement resulted in four title sponsors who paid $5,000 or more, including District 2, Retirement Solutions Group and Christmas Lights Hung 4 U. As well as $14,000 donation from local labor unions in Kansas City; and $17,000 in donations for raffle prizes.

A consisten question asked when the volunteers are fundraising is if the funds stay local to serve veterans.

“We earmark that all money will stay right here in Kansas City,” Bull said.

Immediate Past Department Commander Dan Wiley added, “When people can see where the money is going, that it’s going locally first off, then they can see the tangible benefits. People can understand that’s where the money will benefit, see it with their own eyes, they can go visit (VCP). So they know it’s staying local and it’s helping homeless veterans … that really encourages people to contribute to the project and donate.”

The raffle prizes included up to 10 items for both the men and women’s package, travel and experience package, and tour of Kansas City package. Some of the live auction items included:

- a shotgun donated by Up In Arms that sold for $825 to benefit The Battle Within.

- a wooden American flag art piece donated by Eddie Bernall that sold for $1,100.

- a seat at the final poker table.

- a 14-week-old German short-haired pointer puppy that sold for $625 to benefit FISH. The dog was donated by dog-breeder Coulton Landreth, an Air Force veteran of Iraq/Afghanistan who won second place in the poker tournament. “It was the best thing I could think of to help out,” Landreth, a friend of Bull’s, said. “You tell me what I can do for you, and I’m going to do it.”

- a McCormick Distillery 1969 Chiefs Super Bowl Bourbon decanter that sold for $2,700 and donated by Post 19 Legion Rider Robert McClelland, a former Army Black Hawk mechanic who had tears in his eyes when it was auctioned for that price and then when it was donated back to the post.

The grand prize raffle drawing was a bottle cap art piece of the American flag with a servicemember saluting that was created by Zeke Crozier, a medically retired Army staff sergeant and founder of Handy-Cappin’. Crozier’s Chinook helicopter crashed in 2011 during his second combat tour in Afghanistan. He sustained a traumatic brain injury, had to learn how to walk and talk again, and continues to work through PTSD. After retiring from the military at 27 years old, he “had to find a new purpose.” He found art therapy through bottle caps and with it is helping other veterans find healing and purpose.

Everyone who has a hand in the Hold ‘Em for Heroes event wants to serve and help their local veterans.

“As a deputy (with the Johnson County Sheriff’s Office), I see a lot of homeless veterans coming into our jails and it’s sad because maybe they’re dealing with mental illness or they can’t find a job or keep down a job,” said Corinna Sander, a Post 19 Auxiliary member and Legion Rider, and coordinator for the event. When Corinna's husband, Mark, a Post 19 Legion Rider, asked his business clients with Christmas Lights Hung 4 U to match him in donations for Hold ‘Em for Heroes they did – $4,000.

“A lot of veterans want to give back and I think that’s why this is such a success … they want to help, the community wants to help,” she added.

On any given night, more than 200 veterans are on the streets of the Kansas City metro area, Morales said. So he and several of his combat friends founded VCP in order to be proactive and help these men and women.

VCP’s 49 tiny homes sit on 5,000 square feet of land and come fully furnished with new furniture, appliances and household goods that become the personal property of each resident once they transition out. Donations from the American Legion's Hold ‘Em for Heroes event helped build a tiny home and has provided means to purchase the items needed to refurbish the homes for new occupants. Morales said while VCP is known for its tiny homes, there are many other onsite services that they provide to address the underlying cause of the veteran’s homelessness and get them back on their feet.

Morales tells the veterans living at VCP “every day that you are here we are pushing you forward. Every day you are going to put your best foot forward just like in service. I’m going to be here to help you, I’m going to push you through it, and we are going to do this together.

“Our veterans see us every day. And they see the support of the community.”

Bull, Carver, Harrison and KCTV-5 evening news anchor Ellen McNamara presented Morales with the big $54,516 check in a roaring applause. But donations to the check didn’t stop there – an additional $200 was given from the poker player’s winnings; and VFW Post 6654 gave $500 from tips earned at the bar.

“If we can support other veterans service organizations, absolutely we are going to do that,” said VFW Post 6654 Commander Chris Ruff, an Army Chinook helicopter pilot who served three tours in Afghanistan.

The money from the VFW served as a reminder to Bull that “when you see 30-plus volunteers and the local community get behind something like this … we are going to be able to help more veterans by working together among the veteran community and veterans service organizations. As this continues to grow, we’re going to be able to do more for veterans in Kansas City.”