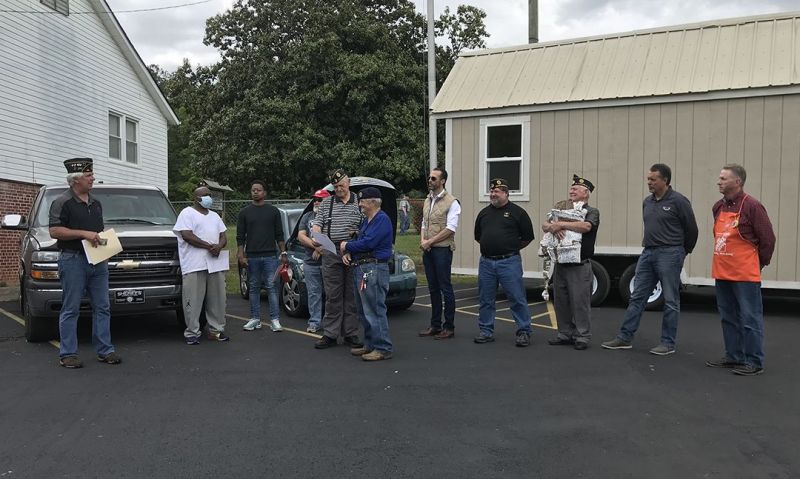 More than 20 years ago, William Bolton lost his wife to breast cancer. Since that time, the Vietnam Air Force veteran has been paying off medical bills, surviving on a limited income, and living wherever he can find shelter. A small Volkswagen was about to be Bolton’s new living arrangements, a space that would have been “awfully uncomfortable at the age of 71,” he said. Thankfully, Thomas M. Brady Inc. American Legion Post 45 in Canton, Ga., stepped in “and made a difference in my life.”

Bolton will have permanent shelter in his new tiny home.

Post 45 recently gifted Bolton – a Paid Up for Life member of Post 316 in nearby Woodstock, Ga. – with the tiny home that was made possible by the efforts of Legionnaires, Blessed Trinity Christian High School in Roswell, a Home Depot Foundation grant and community support.

Bolton “was the perfect recipient for us to give it to,” said Jim Lindenmayer, service officer for Post 45 and director of the Cherokee County Homeless Veterans Program (an affiliated nonprofit of Post 45 made up of 100 percent volunteers).

Last summer Lindenmayer was notified that students from Blessed Trinity Christian High School were in the process of building a tiny house and wanted to donate it to a homeless veteran through the CCHVP. However, the students needed funds to complete the project.

CCHVP works closely with Habitat for Humanity and the Home Depot Foundation, fulfilling about 10 projects a year for veterans in need of home repairs with grants from the Home Depot Foundation – in 2019 alone the program received about $100,000 in grants. So CCHVP was able to secure a Home Depot grant and other financial assistance from the community for Post 45 to build the tiny house that features a loft for a bed, bathroom, living area, and a kitchen with appliances such as a stove and refrigerator.

When it came time to gift the tiny home to a homeless veteran, one couldn’t be identified due to restrictions in place – the home was not permitted to be in Cherokee County. “We were trying to find the right veteran to get it,” Lindenmayer said. And that’s when Post 45 learned that Bolton, who owned an acre of land in a county north of Cherokee, was getting evicted from his current residence. CCHVP went through Bolton’s qualifications and said, “This is the guy we want to give it to. It’s perfect for him,” Lindenmayer said.

Bolton is waiting on the permit so the tiny home can be placed on his land, along with water and sewer hookup. When Bolton learned that he was going to be able to live on his own land, which he had on the market to sell for a few years, “I thought that was wonderful. It will make for my old age to live comfortable,” said Bolton, who is currently living with some friends. “This means everything. I will be able to enjoy life again.”

Bolton said he’s appreciative of Post 45’s generosity and the efforts of Lindenmayer in making the tiny home possible for him. For Lindenmayer, it was about giving Bolton “a house of his own.”

The tiny home is just one of the many ways that Post 45 and CCHVP supports veterans in the community.

Two years ago Lindenmayer met a 100-percent service-connected disabled veteran, with a wife and two kids, whose 20-year-old car quit running and he couldn’t afford a new one. By fate Lindenmayer received a call from a veteran who had a 1995 car with 195,000 miles that he and his wife were no longer using and wanted to donate it to a veteran in need of one.

The opportunity to provide reliable transportation sparked the idea for Post 45 to implement a vehicle donation program for veterans that need it most. Since that time, Post 45 has donated 16 vehicles to qualified veterans – those who are honorably discharged and at least 70 percent VA service-connected disabled or former homeless veterans who have overcome their situation and are now back on their feet.

Last month, the program gave two cars to veterans. One was given to Darius Roy, a Navy veteran who recently transitioned out of the military and has been without a car for years. But he needed transportation to get to work and take his daughter to school.

"When you have somebody like The American Legion who comes and steps in and helps you make that transition once you get out of the service it’s definitely a blessing," Roy said.

Lindenmayer said about 80 percent of the used vehicles given to the program – which are retitled to Post 45 through the DMV – are from other veterans. All vehicles received by the post for donation are sent to a local mechanic, who is a veteran, for inspection and repairs if needed. Then, the vehicles are sold to veterans for $1.

“People know that if they have a need they call us, and we do it for them,” Lindenmayer said. “This is what we do about giving back … this is what we’re supposed to do is take care of veterans and the Legion should be in front of this and that’s what we’re doing.”

Lindenmayer said most vehicle donations have been to formerly homeless veterans, including one to a homeless Navy veteran who was walking to and from his Walmart job nightly for over a year.

Lindenmayer said the veteran has to have a valid driver’s license, pay for the car tax, insurance, and basic needs.

Post 45 and CCHVP’s furniture donation program is similar to the vehicle donation program where veterans and non-veterans donate unused furniture to other veterans in need. The moving company Two Men and a Truck heard what the post was doing and wanted to provide moving fees for free.

The program has been underway for only four months but in that short amount of time they have already moved 20 families and provided furniture to house the homes.

“We do a lot here in the community. And we’re making life-changing donations.”