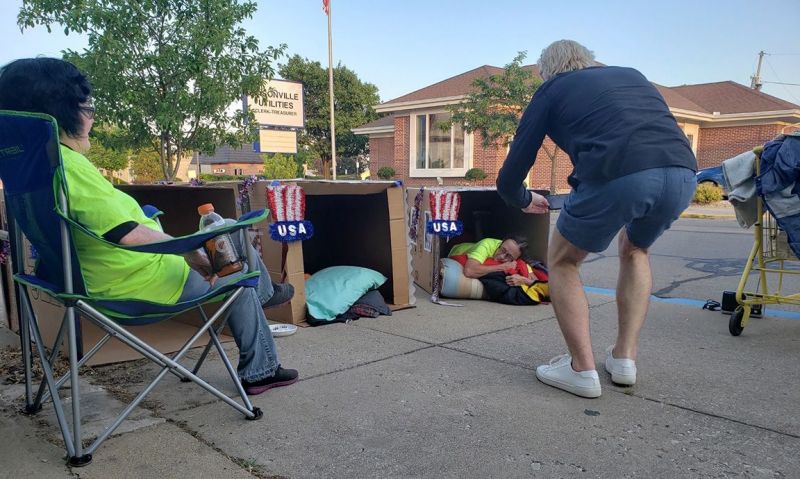 In the small city of Jasonville, Ind., there isn’t an obvious homeless veteran population. But as far as American Legion Auxiliary Unit 172 President LuAnn McDonald is concerned, any homeless veterans in the city – and in the surrounding area – are cause for concern and deserve assistance.

That was the thinking behind McDonald’s recent effort at raising both awareness about and funding for homeless veterans. She and other members of Unit 172 set up what she called a “box city” outside of Post 172 and used the boxes as beds over the course of the night.

The idea “just kind of popped up in my head,” said McDonald, who serves as the Indiana Auxiliary 7th District president and is the wife of American Legion Post 172 Commander Dale McDonald. “I brought it up at one of our unit meetings … and they all just kind of looked at me like, ‘Really, you’re wanting to sleep on the sidewalk?’ I said ‘Well, I’m not so crazy about sleeping by myself, but if I can get some of you girls to go along with it, it’d be a good way to help our homeless veterans.'

“Jasonville is a small town, so we don’t see a lot of them. We don’t know them by name, we don’t know exactly where they are, but we do know they exist.”

With the full support of Post 172, McDonald and other Auxiliary members were able to get the boxes donated and advertise their plans through word of mouth, local media outlets and social media. Channel WTHI-TV out of nearby Terre Haute did an advance on the event and then came by to interview McDonald and do a segment on the effort.

For McDonald, the message behind the effort was simple. “Many homeless don’t have as much as a piece of cardboard, or a scruffy piece of blanket to cover up with as they lay down on the sidewalk, or under an overpass, to try to get some rest,” she said. “They don’t know what nightfall will bring their way, what morning will bring for them. Perhaps just another lonely, hungry and tired day. And many just pray that they will see the morning light.”

Through its effort, Unit 172 was able to share that message with the community, which McDonald said was very supportive of the effort. Area residents drove by the post to donate money, while others called by phone to inquire how they could assist the effort.

When it was over, Unit 172 was able to raise close to $2,500 that it will donate to an area organization that works solely to assist homeless veterans. “We were thrilled that we raised as much as we did,” McDonald said. “But when we have something big going on and it’s a real worthy cause … we have a lot of community support. We even had kids hanging out of their parents’ car windows handing us money. That was pretty cool.”