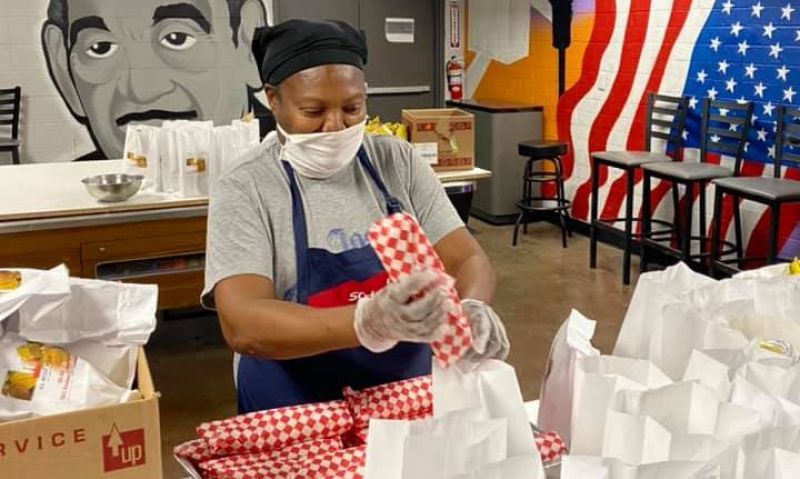 All About Food inside American Legion Post 65 in Phoenix, creates meals for at-risk population.

Michelle Daniels was notified of the new Feed Phoenix Initiative program a day before applications were due. She submitted an application in time with hopes to prepare and provide nutritious, fresh meals to people in the community facing hardship from the ongoing pandemic. Daniels, an American Legion Auxiliary Unit 65 member in Phoenix and chef/owner of All About Food LLC restaurant inside the post, told Post 65 Commander Jarvis Reddick, “I think it will be a great opportunity for us to give back.

“And to make sure that people know more about not just The American Legion, but the unit of the Auxiliary as well. In our community they see the Legion, they know about the Legion but they don’t know about our community involvement. That piece I think is very important for people to understand and our why.”

A week after submitting the application in late July, Daniels received notice that All About Food was chosen as one of the participating restaurants for the Feed Phoenix Initiative that set a goal to provide 300,000 meals to the local at-risk population by the end of October.

Over two days in August, Daniels and other Post 65 American Legion Family members prepared, cooked and packaged 300 meals made with locally sourced vegetables and ingredients that were delivered to the homeless population, elderly, children and families. And just last week, Daniels and her Legion Family team cooked another 150 meals.

“Families that received the meals were grateful and commented on how flavorful they were, and that made us feel good,” Daniels said. “When you’re able to get your hands on something that is nutritious, and it makes you feel good, it may be comforting. It means a lot.”

Meals provided included a whole wheat wrap with chicken, cheese, and fresh organic greens and vegetables; a veggie wrap; a grilled chicken Asian salad; something sweet like a homemade chocolate chip cookie or rice Krispy treat; and a salty snack to create a balanced meal.

Cooking and creating All About Food “started out as a passion that has turned into a fulltime luck” for Daniels. She graduated from Le Cordon Bleu College of Culinary Arts in Scottsdale, Ariz., in 2003 and has worked in the food service in hotels, resorts and hospitals, feeding up to 1,000 people, all while being a personal chef by creating private dinners and meal prep on the side through All About Food. Daniels had volunteered in Post 65’s kitchen prior to her being recently asked to become the kitchen manager last March. Post leadership allowed her to use All About Food as the restaurant’s name. “We collaborated, and we’re here not only to feed our community, but our veterans that come in,” she said.

Besides helping out in the kitchen, Daniels has served as Unit 65’s president twice, second vice commander, historian, and Girls State chairman and co-chair. She joined Unit 65 many years ago after the passing of her grandfather, a master sergeant in the U.S. Air Force and a Legion member.

“My grandparents raised me, and I went everywhere with them. So I grew up in the Legion," she said. "After he passed away one of the things that I wanted was for his memory and the things that he loved so much about The American Legion to stay in my forefront. In order to do that a part of me wanted to be able to give back to volunteering with the post, doing whatever we can to help our veterans in the community.”

Daniels expects All About Food will cook and serve another 400 meals between now and the end of October when the Feed Phoenix Initiative ends.

“Part of the reason I became a chef, or my love for food, was the memory that it creates, the comfort that it brings,” she said. “And also the healing. We need food to live. A lot of people say we live to eat, but we also eat to live. It is important that what goes into our bodies is good for our bodies. When you can get something that is wholesome and nutritious for you, it not only makes you feel good, but it also gives you the fuel and nutrients that you need to move on. When you don’t have that on a regular basis, being able to get it is a blessing.

“So it brings joy to my heart and a tear to my eye because there’s so many that need it. I know I can’t feed the world, but if I could I would. I’m just happy and blessed to be honored to be able to do it.”