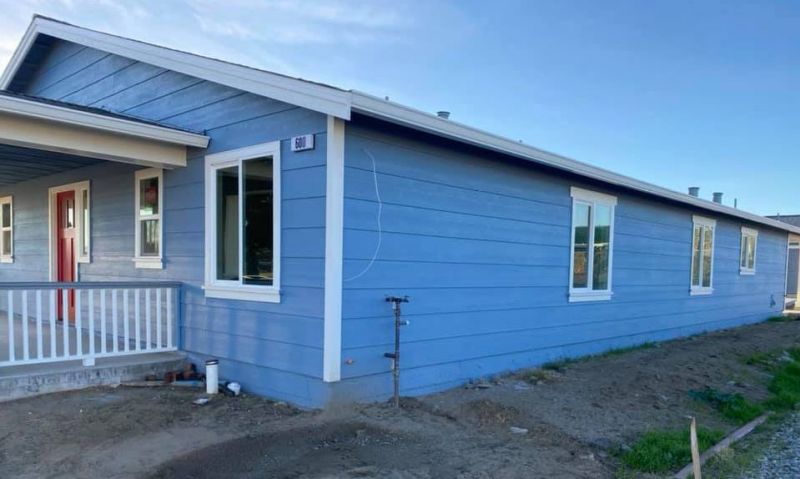 Up to six area homeless veterans now will have a place to live, thanks to a collaborative effort that includes critical support from American Legion Post 178 in Rio Vista, Calif.

An effort involving Solano-Napa Habitat for Humanity, Post 178, Solano County and the City of Rio Vista, the Rio Vista Veterans' Residence was dedicated Jan. 28 of this year and now already is housing two homeless veterans, with three more lined up. The six-bedroom, three-bathroom facility will be open to screened homeless veterans and their families, with no limit as to how long they reside there.

It’s also located right next to Post 178, which donated $50,000 to the project and will continue to provide support to those living in the residence.

“Our role not only is leadership and support, but to develop an integration for our veterans that are coming into the housing project to be welcomed into our community and, of course, our post,” said Post 178 Commander Noel O’Brien, who is medically retired from the U.S. Navy and a retired mental health therapist with the Department of Veterans Affairs. “We’re very strong on this development. It was almost an integration of and development of part of who were are.”

A similar Habitat for Humanity-built veterans residence was discussed being built in Dixon, Calif., five years ago and was completed in 2019. It was during that span that discussions prompted by Post 178 started about developing a similar project in Rio Vista.

“We got on pretty strong about developing a good program to help our veterans, and they were very interested in it,” said O’Brien said. A roundtable meeting brought the critical parties together, and permits and proper paperwork were filed shortly thereafter.

Ground was broken in August of 2019. It was fortuitous that things moved along so quickly because of the impending pandemic that shut much of the country down. “If we were delayed and started in March or April (of 2020), we would have hit the COVID-19 process, and (the project) would have frozen up,” O’Brien said “We were fortunate in being proactive on getting this done.”

Local tradesmen donated their time and expertise to make the project happen, as did the Home Depot Foundation and other members of the community. O’Brien said much of the project communication happened during Zoom meetings, including fundraising efforts by the post – which O’Brien said immediately gave its support to the project.

One of those fundraising efforts was the post’s annual Kinser Cup Golf Tournament, which is named for Adam Kinser, a local resident and Army reservist killed when a weapons cache exploded on Jan. 29, 2004, in Afghanistan. The tournament is in its seventh year, and this year was headed up by Post 178 First Vice Commander Bill Cregg.

Because of COVID-19 restrictions, Cregg said planning for this year’s event including incorporating social distancing and other safety precautions. But this year’s event was able to raise more than $20,000 after expenses were paid.

“Because of COVID-19, there were a lot of restrictions,” Cregg said. “We had to modify how we ran the course and how we got people involved. There were a lot of obstacles, but amazingly it came off much better than I thought.”

O’Brien said the residence is built on memorial soil, which means that “the buildings that are built there can never be changed, never be sold, never be put in as something other than what was already designated.” A memorial garden also will be created on the property that will include a U.S. flag, bricks and a rose garden.

The first residents moved in earlier this month. Project partner Berkeley Food and Housing Project (BFHP), an organization aimed at providing services for homeless individuals and families, will handle placing veterans in the residence and will provide support services for them while living there and after leaving.

That the post is adjacent to the residence and will provide a place for its residents to share time and experiences with fellow veterans wasn’t lost on those involved with the project. “The idea of us being a part of it was a major factor in the success, and approval by the county,” O’Brien said. “Having the veteran community right next door is awesome. It’s just an incredible thing to do. And we like it.”

O’Brien praised Post 178’s membership for supporting the project and the post’s efforts in general, including Post Service Officer Jerome Kahele – “he’s another soulmate, in a sense of responsibility to care for our veterans,” said O’Brien, who also praised the community for its support for the project. “Honestly, the City of Rio Vista, the people in Rio Vista … there’s a vibe here that’s just amazing: their support for what we’re doing,” he said. “It’s a change in the development and foundation pieces of the future of the community, and they’re all for it. It’s a nice feeling.”

O’Brien would like to see what Post 178 was able to accomplish working with other members of the community toward a common goal of fighting veteran homelessness be an inspiration to other American Legion posts. “This is a platform that can be utilized throughout the country,” he said. “We’ve got a lot of homeless veterans. We’ve got (Legion posts) throughout the country. We’ve got the opportunities in many locations that this can be duplicated. This can be put together in a way that can fit the other communities.”

Post 178’s critical role in the project wasn’t lost on the other entities involved, O’Brien said. “That was one of the main issues in making sure we were successful,” he said. “Habit’s view, a number of times, was ‘if it wasn’t for (Post 178) being here and being supportive, it wouldn’t make it.’ Their observation of how much involvement we have given throughout the project is an obvious one.”

Post 178 also has seen its membership grow to around 250 members as the project developed. “It’s a good feeling to see that as we build and we are positive in our development … we look at it as success creating success,” O’Brien said. “We make a difference. It’s about leaving it better than we found it.”