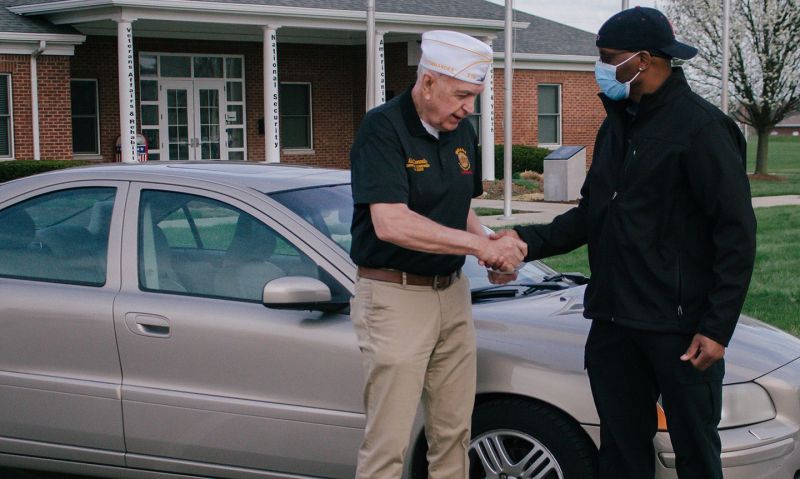 Thanks to the generosity of a local attorney, and a collaboration between the American Legion Department of Indiana and Hoosier Veterans Assistance Foundation (HVAF), a formerly homeless veteran now has a vehicle all his own.

On April 9, Marine Corps veteran Steve Griffin was presented a car by Department Commander Allen Connelly at the Indiana American Legion’s headquarters in Lawrence. The donation came as a result of an individual reaching out to Billy Johnson, who is in charge of business development for the American Legion Department of Indiana.

Johnson said Indianapolis attorney Kevin Alerding, who Johnson taught during ROTC classes at Ball State University, reached out to him to see if he knew of any veterans in need of a used vehicle. The department took the donated vehicle through its Legacy Foundation, which was created to identify the unmet needs of U.S. military personnel, veterans and their families, and provide the necessary resources to meet them.

Johnson then made a call to HVAF, which is located a few blocks from The American Legion National Headquarters in downtown Indianapolis and for nearly 30 years has assisted veterans through case management, housing, employment, and its food and clothing pantries.

The American Legion and HVAF have a history of collaborations. In August 2019 during the national convention, nearly 80 members of the American Legion Family took part in a community service project cleanup of HVAF’s Vista Center/Warman Houses in Indianapolis, which serve as transitional housing units for veterans. And last December, the American Legion Department of Indiana and Indianapolis Post 522 presented to HVAF an American Legion Operation Comfort Warriors (OCW) grant worth more than $17,000 in winter gear and toiletries to help local homeless veterans during the winter months.

“I contacted HVAF to see if they had any veterans that were in need of transportation,” Johnson said. “Luckily, (HVAF’s) Ashlee Walls called me back and said ‘yeah, we do have an individual who needs transportation to visit his kids and get to and from work.' That’s how we linked up with HVAF.”

Griffin currently resides in HVAF’s transitional housing while also working for the Department of Veterans Affairs. He’d been using the bus to get back and forth to both work and to see his family.

“You should have seen the expression on (Griffin’s) face,” Johnson said. “I see a 20-year-old vehicle, and I think this vehicle needs a lot of work. He saw a vehicle that he couldn’t believe was in the condition it was in. He was so, so appreciative of it.

“And it came along at the right time. It’s sort of what we wanted to build into the Legacy Foundation: to reach out to veterans monetarily, or some kind of in-kind donation or some kind of gift like that.”

“This means a whole lot to me and I want to thank HVAF and The American Legion,” Griffin told WTHR. “The car will help me go back and forth to work and look for a place closer to my kids.”

That the car will assist Griffin in seeing his 11-year-old twin sons meant as much to Johnson as it did assisting the veteran with getting to work. “We often say that we’re here to support veterans and their families, and this reinforces the family portion,” he said. “It’s not all-inclusive to just that veteran, but the surrounding support network that includes kids, (spouses) and everybody else that benefits from this. This just kind of reminds us of why we do this.”