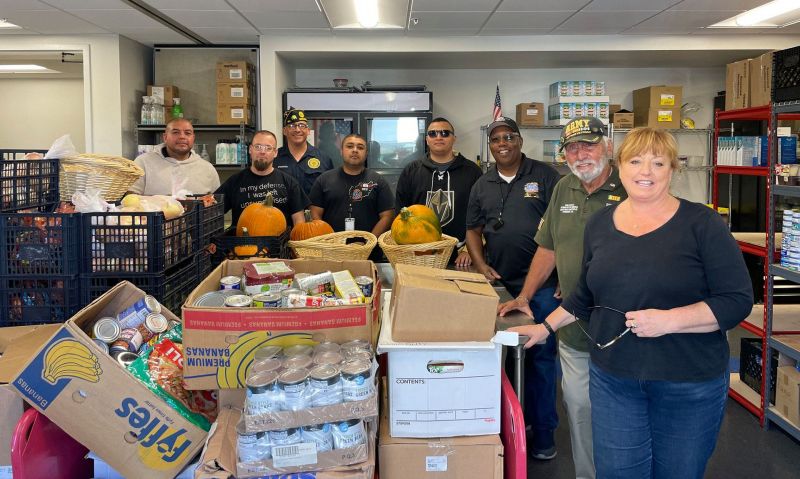 Dawn formed the nonprofit to honor her nephew, doing so by providing holiday gifts to the children of severely injured servicemembers and supporting military families in financial need.

The nonprofit also has begun helping the homeless veterans receiving either emergency or long-term housing at the U.S. VETS-Inland Empire March Veterans Village located next to March Air Reserve Base. And that effort has received full support from Sons of The American Legion Squadron 184 in Redondo Beach, Calif.

A recent effort by Squadron 184 resulted in the collection of more than 1,000 pounds of hygiene products, supplies and non-perishable food. An additional $1,000 was raised to purchase perishable food at the homeless facility’s commissary.

“We adopted Joseph’s Gift as our main charity,” Squadron 184 Commander Ed Mannes said. “Joseph is an alum at a local high school. I went to that high school, and he was there when my daughters were there. We said, ‘This is an organization that’s really trying to help and do things.’ That’s No. 1. And No. 2, it’s a local connection. It’s not giving blindly to some national group type of thing. We wanted more of a hands-on type of approach.”

Dawn, a member of Auxiliary Unit 184, said Joseph’s Gift is a one-person operation. Assistance like that provided by Squadron 184 and the rest of the post’s Legion Family “gives me credibility. And the guys down there are very helpful and very supportive. I’d come up with (the idea for the collection drive), and they helped me run with it.”

Squadron 184 does regularly BBQs as fundraisers, which helped pay for the food purchase at the commissary. Squadron 184 also has helped with the cost of shipping care packages to servicemembers through Joseph’s Gift.

Dawn said it took four trips to deliver all of the collected items. “After that, I went and talked to the veterans,” she said. “The ones that I met, they were Vietnam vets, there were Desert Storm vets. They were older veterans who are off the street for the first time in a long time, and there was one guy who was on the verge of going on the street when he found this transitional housing. I’m all in now that I’ve talked to these guys.”

Dawn praised Squadron 184 and the rest of the post for what they’ve meant to her charity. “This post has been so supportive,” she said. “I have nothing but good things to say about this post. Every time I come up with an idea, these guys are like, ‘We’re in.’

“It really is life-changing to know that you can help somebody through something as simple as this. People want to help. We just don’t know how, because our military goes, ‘We’re fine. We’re fine. We don’t need anything.’ And that’s not true.”