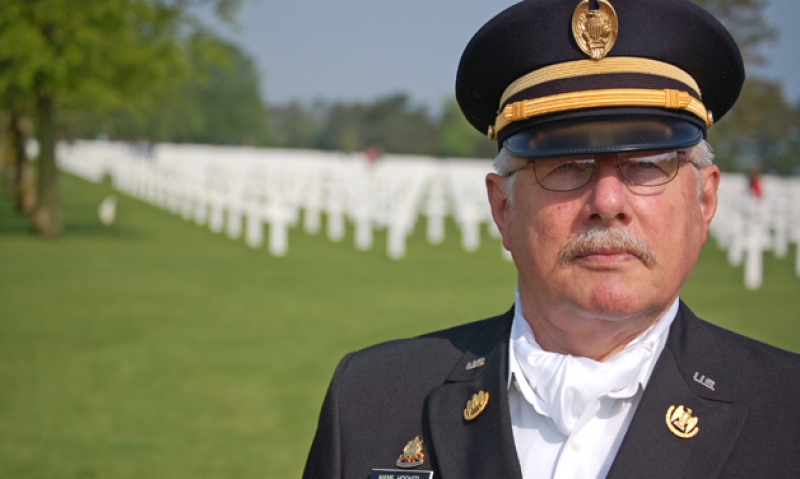 Hans Hooker's 23-year career with American Battle Monuments Commission will come to a close at the most-visited U.S. military cemetery in Europe, the Normandy American Cemetery. (Photo by Jeff Stoffer)

Hans Hooker paused as the crowd of visitors grew at the Normandy American Cemetery on the morning of June 6, the 69th anniversary of the D-Day invasion of World War II. He had just accompanied American Legion National Commander James E. Koutz and American Legion Auxiliary National President Peggy Thomas in a wreath-laying ceremony at the base of the statue, "American Youth Rising from the Waves."

He thought about American Legion national commanders he has met in recent years. He reflected on heads of state he has guided through American Battle Monuments Commission (ABMC) cemeteries in Belgium, Luxembourg and France during his career. He has spent the last 23 years professionally honoring the memories of U.S. military personnel who made the ultimate wartime sacrifice in Europe.

"For me, it’s not a profession," said Hooker, a member of Flanders Field American Legion Post 2 in Belgium. "It’s not a job. For me, working for this commission – being entrusted with the care, the custodianship of our nation’s dead – it’s a calling. You don’t punch a time clock. You don’t come to work at 9 o’clock in the morning and at 5 say, ‘Well, day’s over.’"

At the end of June, Hooker will retire from the ABMC, ending a career of foreign service to the United States that began when he enlisted in the U.S. Army in 1967. He did two stints, re-enlisting in 1972 and staying in until 1990. As a soldier, he was a chauffeur for three different four-star generals and, fluent in French, he was also used as an interpreter. In 1990, he went to work for the ABMC, which presides over 24 overseas cemeteries and 25 other U.S. war memorials and monuments.

"I started out at the Ardennes Cemetery in Belgium," Hooker said. "From there, I came here to Normandy where I spent nine months as the assistant superintendent over the 50th anniversary of the D-Day commemorations. I was selected for a promotion to superintendency and spent three years at Flanders Field in Waregam. From Flanders Field, I was assigned the position of director of human resources for the entire European region. Then I went back to the Ardennes Cemetery. I spent eight beautiful years at the Ardennes Cemetery before being chosen to go to Luxembourg, the cemetery where Gen. Patton is interred. I did two years there before I was selected for another promotion, to come to Normandy."

His career with the ABMC would come to a close at the most-visited U.S. military cemetery in Europe, where 9,387 Americans are buried and another 1,557 are listed as MIAs. The Normandy American Cemetery was a prominent setting in Oscar-winning World War II movie "Saving Private Ryan."

"I am going to miss it," Hooker said. "That goes without saying. It is going to be a tremendous loss, and I am leaving with a very heavy heart. But it was time."

It was during his first tenure at the Ardennes Cemetery, where 5,529 Americans from World War II are laid to rest, when Hooker rejoined the Legion. He had earlier been a member of Paris Post 1 because that was his father’s post. Following his father’s death, he was asked to join Flanders Field Post 2 in Belgium. The commander of that post, Andre Noreillie, "walked up to me one day and says, ‘You are now a member of Flanders Field Post No. 2.’

Hooker became active with the post and later received a Grateful Appreciation Gold Medal. "There were only three of these medals distributed in Belgium, and I have one."

As he led American Legion National Commander Koutz and Auxiliary President Thomas through the Normandy cemetery, Hooker wore the Legion medal he had received 20 years earlier in Belgium.

Coordinating the national commander’s visits to Normandy for the last few years has been "beyond a pleasure ... it’s an honor. What the Legion stands for, what the Legion does – not only for those who have passed away, like the 9,387 who are buried here – but for those who have survived the horrors of combat and that have served in our nation’s military ... the Legion goes out and works for them, works on their behalf, goes to Congress and lobbies, to ensure that the rights of these people are not forgotten."

Of all the dignitaries who have visited the hallowed grounds under his supervision, none matter so much to Hooker’s memory as the families of the fallen.

"I escorted a 90-plus-year-old mother to her son’s grave at the Ardennes Cemetery," Hooker recalled. "And she stood there, looking at the grave of her youngest, and she says to me, ‘Can you guarantee that’s my baby buried under that stone?’

"And I, of course, had to respond, ‘I can’t guarantee that. I wasn’t even born yet when he died.’ But I pointed out that there are 790 unknown headstones at the Ardennes Cemetery, and this one had a name on it. And the Ardennes Cemetery was the central identification lab for all of Europe, to include North Africa. So the chances were pretty darned good that yes, this was her son. One little tear went down her wrinkled cheek.

"Greeting presidents, greeting heads of state… yes, that is impressive. Yes, it gives you a warm feeling. But when you talk to a parent, that’s something I will never forget."