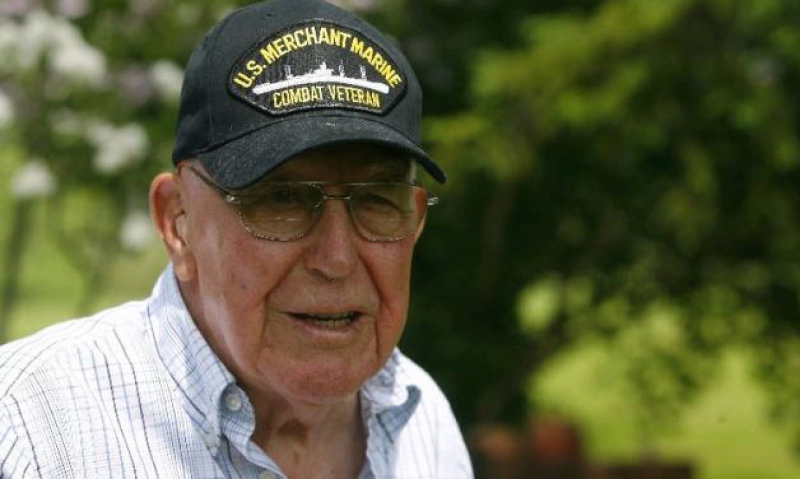 Photo courtesy of the Buffalo News

Nearly seven decades after James Van Splunder decided to join the Merchant Marines rather than be drafted by the Army, he journeyed from his home in Holland, N.Y., to Washington, D.C., to lay a wreath on the World War II Memorial in a special ceremony dedicated to those veterans who gave their lives.

Overlooking the fountains, the arches and granite of the memorial, in the shadow of the Washington Monument and of hindsight, it’s easy to follow the trajectory backward, but at age 19, Van Splunder was just a kid making a decision like any other.

“Well, you know, when you’re young your expectations are different,” he said. “I thought maybe I wanted to go into the Merchant Marines. I love the water so that’s where I went.”

“That’s how I got chosen to put the wreath on the memorial.”

A tight-knit post, the Holland American Legion chartered a bus with nearly 40 members to watch Van Splunder participate in the ceremony. More than 30 family members were able to attend the event in D.C. Reporters and tourists from around the nation and the globe were also there snapping photos and wanting to talk with him, interview him, and honor him. When given the chance to speak, he thanked everyone for coming.

“There were hundreds of people there. I think it was the best ceremony that I’ve ever attended. It had all varieties of the service, and we were all honored. ... It was a great day.”

“Veterans of World War II — and all the other veterans — they gave their lives to protect our freedom, liberty and justice for all. That’s one of the great moments of the history of the United States.”

As a special part of the ceremony his family had arranged, Van Splunder's sons stood with him as he received five medals for his service, among them the WWII medal and good conduct medal. He saluted the crowd and the memorial.

“It was a surprise,” Van Splunder said. “I didn’t know that they were going to reward me with those medals. I felt good about it. Those are the first medals that I ever have received from the Merchant Marines.”

During WWII, the Merchant Marines transported more than 270 million pounds of cargo. Though a higher percentage of Merchant Marines died during that war than servicemembers from any other branch of the U.S. military, they weren’t recognized as WWII veterans until 1988 — more than four decades after the war they served in had ended.

At 91, Van Splunder received his due for services he had performed more than half a century before, services that at times had led him into dangerous war zones.

“I saw a lot of the world, and a few times it was pretty scary.”

After training in sailing, heavy artillery, and other essential skills in New York, Van Splunder worked on the barges in a New York harbor delivering oil to passenger and military ships. But soon, he was shipped out with the cargo freighters.

“We went on a convoy to Africa, but we had no lights on at night and we zigzagged across the ocean for seven days. When we got to the Strait of Gibraltar, the Nazis flew over with their flares, dropped the flares and just then, a big electrical storm came through. And it was big. All the balloons on the other ships caught fire.”

Once they reached Algiers, they picked up secret passengers.

“We picked up Gen. Charles de Gaulle and a French actor, Jean-Pierre Aumont, and then we went to coast of Italy to Naples. It was the old beachhead, but we couldn’t get there with our ship. Then we knew de Gaulle was on the ship, and because of it we were bound that night in Italy. We couldn’t get up to the dock because they had all been blown out.”

Gen. de Gaulle got to shore on a lifeboat.

“Then from Italy we went back up to Mediterranean back to the Atlantic Ocean to England — on to Southampton. There we got our fuel, and we could hear the buzz bombs come over and when the noise stopped they fell to the ground.”

In England, there was a seaman who needed to “get off the ship pretty quick” and onto a cruiser. However, the seas were rocking 20 feet high, making it impossible to shoot a line to the cruiser and forcing the Merchant Marines to take him by lifeboat between the two vessels. He had to hold onto ropes and be pulled aboard.

Following these many narrow escapes, from England, Van Splunder’s crew returned to America. “It was cold — we had to watch out for the icebergs and all that.”

On the six different cargo ships on which Van Splunder served, he traveled to England, Belgium, France, Cuba, Puerto Rico, the West Coast and aboard the Santa Clara Victory Ship.

“During the end of the war we stayed out at sea when they dropped the atomic bombs over Japan, and then the war was over.” On his final ship, Van Splunder went through the Panama Canal, past Hawaii, the Phillipines, China, India, up through the Suez Canal, Egypt, North Africa, the Mediterranean and back to Norfolk, Va.

After this worldwide tour and seeing the ravages of war, Van Splunder still has a few memories to relish, including travel and sailing.

“The most enjoyable sights were in Italy. When we docked there, we were able to go by boat to shore for a while and there were beautiful churches and all that. That was the best part.”

After the war, Van Splunder raised five children with his wife, Ruth, worked almost 40 years as a private contractor for an electric company and has had many grandchildren and great-grandchildren.

The American Legion's Honor and Remembrance web page is interested in stories about your service, your family's military connections, how your post honors veterans and more. To contribute your story, go to Legiontown.org.