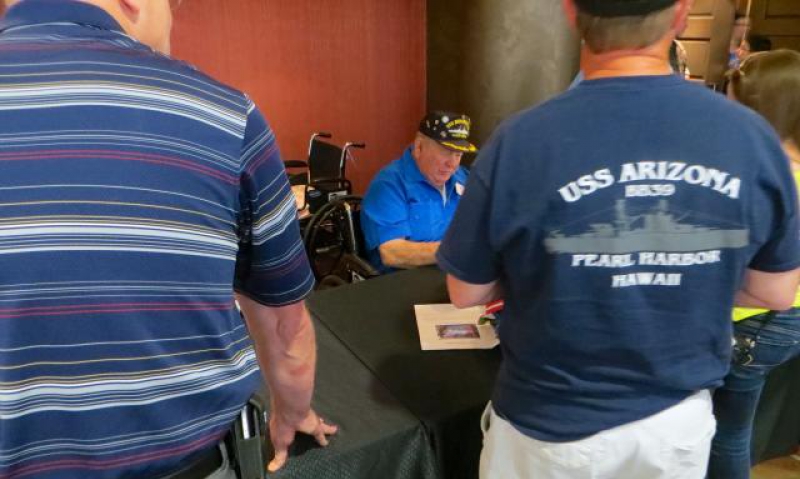 L.D. Cox of Texas, a USS Indianapolis survivor, signs autographs during the group's reunion on Saturday. (Photo by Henry Howard

The Navy will commission a new USS Indianapolis, Adm. Ricky Williamson announced Saturday night during a banquet for survivors of the warship that was lost during World War II.

Williamson told the survivors, their guests and others that Secretary of the Navy Ray Mabus has notified Congress of his decision, pending authorization and funding. The name will be designated on the next littoral combat ship (LCS).

An LCS is known to be a fast, agile surface warship that is able to execute missions close to shore, including mine, anti-submarine and surface warfare. “Once again, the name Indianapolis will be put to sea on the stern of a U.S. Navy warship carrying on the tradition of service that you and your shipmates have forever associated with the name,” Mabus said in a statement to the survivors.

The USS Indianapolis (CA-35) was commissioned in 1932 and sunk by Japanese torpedoes just after midnight on July 30, 1945.

In addition to the heavy cruiser lost in July 1945, two other Navy ships have been named Indianapolis:

During World War II, the Indianapolis delivered components of the atomic bomb that would be dropped on Hiroshima, which prompted Japan’s surrender. Later, while en route from Guam to the Philippines, the Indianapolis was attacked and sunk in 12 minutes.

Only 317 of the 1,196 sailors and Marines aboard were rescued after spending four days in shark-infested water. Currently, there are 38 survivors, 15 of whom attended the reunion this weekend in Indianapolis.

“You should be very proud of the legacy which you leave for our Navy and our nation,” Mabus said in a statement. “Please accept my personal thanks and best wishes for a memorable event.”