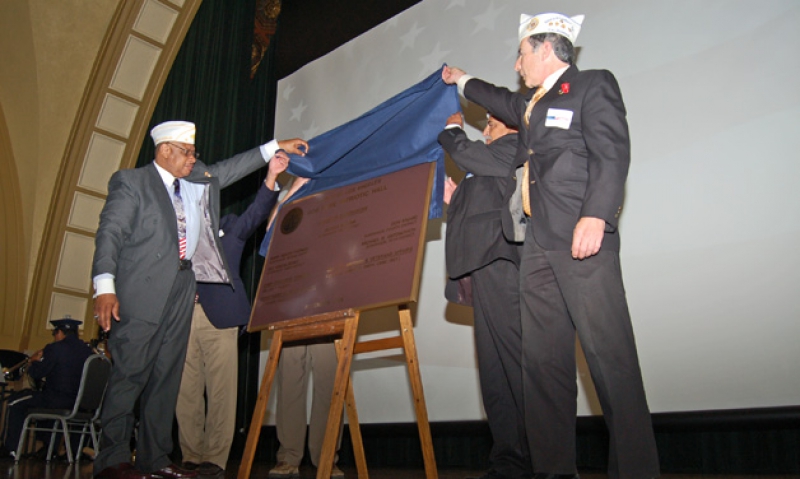 It stood as the tallest building in Los Angeles for seven years. American Legion Post 8 has called it home since original construction was finished in 1926. Parts of the building have appeared in such films as “Patton,”  “Vertigo,” “Flashdance” and “1941.” A number of ghosts, they say, float across its hardwood floors and haunt its conference rooms.

In 2004, it was renamed to honor the Hollywood entertainer best known for performing for U.S. troops in war zones. It was nearly torn down and replaced with a parking structure in the 1980s. Seven years ago, when work began to replace nearly all of its infrastructure, The American Legion and other veterans organizations were told they had to move out or, later, take a place in the basement.

The 10-story Bob Hope Patriotic Hall was rededicated Friday in a ceremony attended by nearly 500, including dozens of Legionnaires and members of other veterans service organizations who see the unique structure as theirs. The rebuilt facility, owned by Los Angeles County, is now poised for another era of service to veterans as troops serving in Afghanistan begin discharging and entering civilian lives. Seven years of work and over $45 million has gone into the facility’s resurrection.

“The fact that this building is being rededicated back to the veterans is a wonderful thing,” American Legion Post 8 member and past California Department Commander Hugh Crooks- Jr., explained. “This is not just for past veterans. It is also for future vets. All future vets will know that this building in Los Angeles County is their building. That’s what it’s here for. That’s what it will always be for.”

Post 8 can now unpack boxes of historic photos, letters and artifacts and put them back on display on the eighth floor of the towering structure which also houses the Los Angeles County Department of Military and Veterans Affairs. Among the artifacts is a collection of more than 300 signed photographs and personal letters from military leaders from around the world, spanning back to the late 1920s, owned by American Legion Post 8. The collection is scheduled to return to full display by Memorial Day 2014.

On Friday, veterans of all eras filled the auditorium where, in the 1970 hit movie, George C. Scott famously played the part of Gen. George Patton in front of a massive U.S. flag that eventually disappeared from the hall. They came to hear from city and county officials, including Los Angeles Mayor Eric Garcetti. As the ceremony was beginning, however, the crowd’s attention was turned to one aisle seat in the front row where 103-year-old World War II veteran Bea Cohen sat. “I have been coming to Patriotic Hall for over 50 years,” said the Romania-born WAC (Women Army Corps) veteran who says when asked what she did in the war: “I was Rosie the Riveter.”

Today, she still serves, collecting socks, underwear and blankets for homeless veterans served by the Department of Veterans Affairs in Los Angeles. “America is the greatest country in the world,” she says, adding that “it’s not right” that any veteran should go without socks, underwear or a blanket in the winter.

When introduced in the auditorium, Cohen – described as the oldest living female veteran in California – received a standing ovation.

Post 8 Adjutant Jesse “Jay” Morales, a three-tour Vietnam War Marine Corps chopper pilot who famously flew Bob Hope into theater for his first performance for troops there, has been coming to Patriotic Hall since he was a young boy. When he joined The American Legion in 1972, he began attending meetings there. Over the next four decades, the hall and its continued role as a place for veterans and The American Legion, charter tenant of the facility. “This is a veterans memorial building, one of very few like it in the United States,” Morales said. “It belongs to the county under an agreement that it remains in use for veterans who provided the land upon which it was built.”

“It’s now back to what it was intended to be,” adds John L. Stamatiades of American Legion Post 285 who was one of many who embraced Bea Cohen at the rededication event Friday, a place in time where the vision of those who served nearly 80 years ago rounded a corner in history as a new generation of veterans begin to call Bob Hope Patriotic Hall their own.