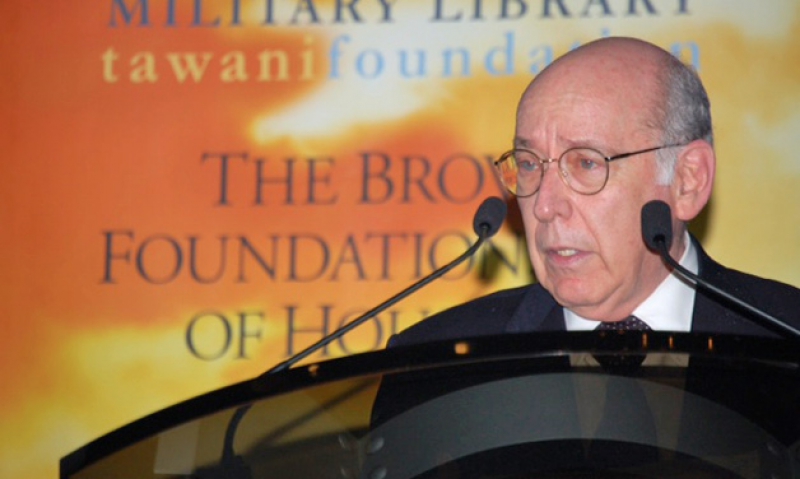 Scholar Mark Stoler delivers the keynote address of Friday's session of the 2013 International World War II Conference in New Orleans. Stoler conference attendees that 1943 was the critical year for strategic planning among the Allies with no fewer than six summits to decided on a plan to defeat Hitler's Germany. (Photo by Jeff Stoffer)

High casualty numbers on both sides of the war, the advent of unrestricted submarine warfare, and arguments among Allied leaders made 1943 a pivotal year in the pursuit of victory on multiple fronts over Axis powers of World War II. “1943: Victory in the Balance” is the title of the Sixth International World War II Conference for good reason, scholars demonstrated Friday in New Orleans.

“We all know how the air war came out, but it sure was not evident by the end of 1943,” said Dr. Conrad Crane, director of historical services at the Army Heritage and Education Center. Crane was the moderator of a two-pronged discussion involving top experts on the air war in Europe.

“No one had air mastery over the continent,” added Dr. Donald Miller, author and primary source for an HBO miniseries titled “Masters of the Air,” the same name as one of Miller’s eight books on the Second World War. Air casualties were well over 50 percent for both the 8th Army Air Force and for the German Luftwaffe that year, which came to deadly crescendo in October 1943 — known as “black October” —when pilot morale was low, psychological conditions began to rise and training requirements declined as the need to send more men into the skies continued. “To win a war of attrition can be a terrible thing, even for the winning side,” Miller said. “It was literally trench warfare in the sky.”

Miller, who spoke of U.S. and British air strikes deep into Germany during 1943, and Dr. Richard Muller, who discussed Germany’s “enormous losses” and inability to replace pilots and planes as effectively as the Allies, agreed that the air war was a deadly horror not only for those in combat but for the people below. Fighting went on 24 hours a day, seven days a week, ultimately weakening Germany’s war machine but leaving both sides feeling as if they were losing by the end of the year. Such effects as a great firestorm in Hamburg, Germany, was just one example of collateral damage that incinerated thousands and forced more than 1 million to leave their destroyed homes.

Meanwhile, in the Pacific, 1943 was the year unrestricted submarine warfare meant that American forces could attack any Japanese vessel, combatant or not. “At the end of 1943, 335 Japanese ships were sunk in exchange for 15 U.S. submarines,” explained U.S. Navy Lt. Cmdr. Joel Holwitt, author of the 2009 book “Execute Against Japan: The U.S. Decision to Conduct Unrestricted Submarine Warfare.”

The journey to superiority below the surface was not easy, Holwitt told the crowd gathered at the Hyatt Regency Hotel in New Orleans, and others viewing the conference by live stream free of charge at www.ww2conference.com. U.S. torpedoes, for instance, were deficient for 21 months after the decision to conduct unrestricted warfare was made. Finally, in 1943, the problems were corrected, and American submarines effectively cut off supplies and weapons to Japan. In the end, Holwitt said, Japan lost 1,113 merchant ships to U.S. submarines, imposing a blockade that caused an estimated six starvations a day among Japanese forces.

“It also denied them the ability to build weapons for war,” he said, noting that submariners, while a sliver of the overall U.S. military force during World War II, suffered 22 percent casualties. Better, faster Gato-class and Balao-class submarines were a major part in a momentum shift in the Pacific that by 1944 would all but eliminate Japanese naval operations in the theater.
As the air war was fought to a standstill in Europe and as U.S. submarines were conducting unrestricted warfare in the Pacific, and as Marines were fighting bloody battles in such places as the Tarawa atoll, Allied leaders were arguing about how to bring an end to the Axis.

“1943 was the year of Allied summit conferences —six of them,” said Dr. Mark Stoler, author of numerous books on the war and its leaders. “Why all these conferences?”

The reason, he explained, was that U.S. President Franklin Roosevelt, British Prime Minister Winston Churchill and Soviet Union Premier Joseph Stalin could not agree on the time and place for a definitive invasion. Their summits brought together top military leaders who argued continuously until finally determining on the invasion that would be D-Day in Normandy, France, in June 1944.

They finally concluded that the key to defeating Germany was to “cross the channel as soon as possible and start a second front in France.” That decision was stimulated, Stoler said, by a Soviet commitment to fight Japan once Germany was beaten. As the invasion location was debated in the six conferences of 1943, “they didn’t shoot at each other, but they did shout at each other quite a bit,” Stoler said of the meetings that ultimately gave birth to the U.S. Joint Chiefs of Staff. The final decision among the Allied leaders, Stoler said, “was grand strategic bargain. This time, the coalition did work.”

Friday’s session also included a showing of rare World War II footage from the Battle of Tarawa that, explained presenter Dr. Allan Millett, “was controversial because the film showed bodies of American dead.” The footage, shot by Maj. Norm Hatch, was used in an Academy Award-winning short documentary titled “With the Marines at Tarawa.”

Over a dozen World War II veterans were in the audience for the conference Friday, and author Don Keith, who gave a presentation about heroic submarine Cmdr. Dudley W. “Mush” Morton, explained to the crowd the importance of collecting firsthand history of World War II before all who fought in it are gone. He said he is now working on a book about the Battle of Coral Sea and cannot find veterans who fought in it to interview. “We need to save these stories,” he told the group. “We need to capture that eyewitness history.”

Keith, a former award-winning broadcaster, now operates a website to collect and publish firsthand accounts of the war. The site can be found at www.untoldmillions.net on the web.

The sixth annual conference was conducted by the National World War II Museum in New Orleans. Read Day 1 of the conference here.