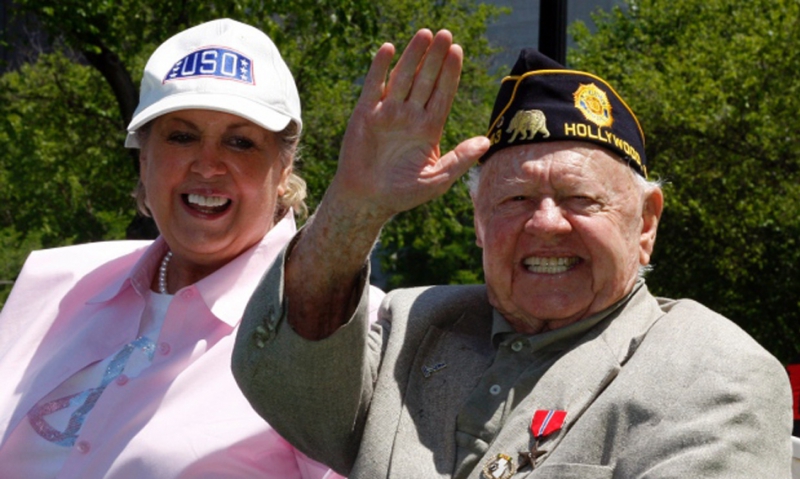 Mickey Rooney, alongside his wife Jan, waves during the 2008 National Memorial Day Parade in Washington, D.C. (Photo by Joe Gromelski/Stars and Stripes)

The American Legion is paying its deepest respects to Mickey Rooney, a renowned actor and entertainer, World War II Army veteran and member of American Legion Post 43 in Hollywood, Calif. Rooney, 93, passed away Sunday at his home in Los Angeles.

Rooney was born in Brooklyn, N.Y., under the name Joseph Yule Jr., but later changed to his stage name Mickey McGuire, which resulted in lawsuits. To avert further legal wranglings, he changed his name to Mickey Rooney at 12 years old.

He was recognized in Hollywood for his ability to act, sing and dance, landing him in roles alongside other Hollywood stars such as Elizabeth Taylor in “National Velvet” and Judy Garland in “Love Finds Andy Hardy.” Rooney’s role as Andy Hardy — whom he portrayed in more than 15 feature films —became one of “Hollywood’s best-loved characters.” Other notable films Rooney starred in include “Babes in Arms,” “The Human Comedy” and “The Bold and the Brave.”

Rooney left his thriving film career in 1944 to enlist in the Army during World War II, where he served more than 21 months and spent most of his time entertaining troops in combat. He was awarded the Bronze Star Medal. For his service, he also received the Army Good Conduct Medal, American Campaign Medal, European-African-Middle Eastern Campaign Medal and the World War II Victory Medal.

Rooney’s nine-decade career earned him an appearance on the March 18, 1940, cover of Time magazine and several prestigious awards, including two Golden Globes, an Emmy, three Academy Award nominations and an Honorary Academy Award “in recognition of his 50 years of versatility in a variety of memorable film performances.”