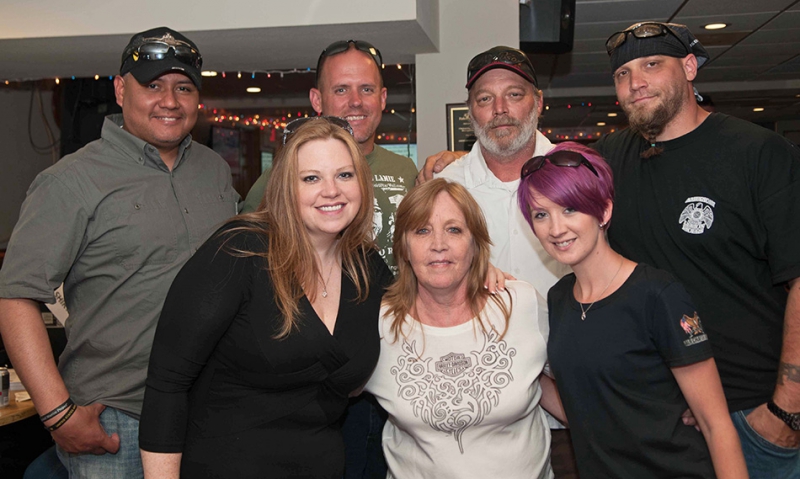 The family of Sgt. Gene L. Lamie, killed in Iraq in 2007, were guests of honor over the Memorial Day weekend at American Legion Post 177 in Fairfax, Va. Lamie’s parents, Linda and Eugene, his brother John – wounded in Iraq – and sister-in-law Jennifer made a lot of new friends very quickly.

“I just want The American Legion to know that this post right here has been awesome to us,” Eugene said. “It’s like another whole new family. It means the world to us that this post looks after us the way they do. And every time we’re up here, this is where we’re going to be – Post 177.”

Lamie is buried at Arlington National Cemetery, leaving behind his wife, Dara, daughter Lyrean and son Gene Benjamin. “We speak with Dara at least once a week,” Linda said. “I go and get Gene’s son in Arizona, and he spends the summer with us. The death did not tear us apart. We are together, we remain together.”

Eugene, married to Linda for 37 years, lives in Homerville, Ga., not far from the Florida border. He said the family used to celebrate Memorial Day like a regular holiday. “But after what happened with our sons, that’s when I learned to respect and honor the soldiers that have been lost, or are serving and have served – and the support they need to help them get through things. We may have lost Gene, but I’ve still got John and that’s my whole world.”

John served with the 648th Engineer Battalion in the Georgia Army National Guard. He was a sapper – a soldier who clears away mines – and later served with the 2nd Brigade Combat Team, 1st Infantry Division. He was twice-wounded by IEDs before being medically discharged in 2009.

The Army made sure that brothers Gene and John were never deployed overseas at the same time.

“Half my squad got killed three days before my 21st birthday, and they sent me home right then,” John said. He was at his parents’ home on his birthday when brother Gene called from Fort Hood. “He got on the phone and said he was sorry. Then he said, ‘You know, it sucks now but in 10 or 20 years, when those people can do the same things we can, everybody will understand why we do what we do.’"

The next day, Gene begged his commander to take early leave and was put on temporary recruiting duty so he could go to Homerville and see John.

Linda said Gene was in Iraq the first time women were allowed to vote in an election. “He stood guard over those women, and he sent me pictures of them coming out with ink stains on their thumbs. He said, ‘Momma, these women were willing to die to vote, and we’ve got people that are too lazy to get a free ride to the voting booth to vote for the officials that are making decisions about where I’m going to be deployed. Those women fought for something. They might not have picked up a gun, but they put their lives on the line.’”

Gene helped some of those Iraqi women get the ink off their fingers before they went home so their husbands couldn’t see it. He was amazed by the strength of those women, Linda said, because “if they came home with blue thumbs, their husbands had the legal right to beat them or kill them because they didn’t have any rights.”

John Lear and Max Orellana accompanied the Lamie family to Arlington and paid their respects; both of them served with Gene. All three of them deployed to Iraq together in 2004.

“It’s one thing to see a television image of Arlington Cemetery,” Lear said. “It’s entirely another thing to go there yourself, or go to a place where they’re celebrating veterans and somebody can tell you the stories about how great their friend Gene was and how much it hurt to see somebody like that leave, who was making such a great contribution to his society. He believed in freedom, and he believed in what his country stood for.”

Lear remembers his friend as “one of those people who’s a little bit quiet when you first meet him. After you get to know him, he’s just as open and friendly as can be. Very jovial, always has a joke, always in a good mood. He was very proud to serve, happy to be in the Army.”

Orellana, who serves in the Maryland Army National Guard, called Gene “a great soldier and a great example for a lot of people. His personality was very friendly. When he lived in the barracks everybody knew him. If you needed anything, he would give it to you.” And Gene was “really into trucks.”

Yes, Linda said, Gene loved “riding on dirt roads with his pickup truck. He loved hunting, fishing and the Georgia Bulldogs. He had a great sense of humor and beautiful blue eyes. He could tell the biggest tales and pull the worst pranks – all of us are victims of his tricks. By the time you figured out what he’d done, it was two days later – you couldn’t even be mad at him.”

American Legion Post 177, like many other Legion posts, has a lot of members who served in the Vietnam War. Linda credits that generation of veterans for the way America honors those who served in Iraq and Afghanistan.

When John returned from a deployment, a group of Vietnam War veterans met his unit at the airfield. “When we got home, the first thing I did was kiss the ground. Then I stood up and there was a line of probably 60 Vietnam vets on either side of us. And every one of us was told ‘Welcome home.’ And the guys said the main reason they did it is because they never got treated right when they came home, and they would be damned before that happened to the next generation. So we’ve always been in their debt, and we always will be.”

The American Legion, John said, is helping him to get his Purple Heart that he’s been waiting on for nearly 10 years. “They got my paperwork yesterday, and they’ve already made phone calls to find out why it’s been held up.”

Within a few hours of arriving at Post 177, John said he “didn’t want to leave. They bring you in, and they make you feel like family.”

Gene’s mother wants Americans to remember that her sons, and the sons and daughters of other parents, were not drafted into military service. “They signed up, they volunteered. They left their wives, their children, their mothers and fathers and homes. They spent Christmases and birthdays overseas, missed the births of their children – to defend this country. There’s so much we take for granted here.”

Remembering Gene and his death in Iraq, Lear said his friend “was willing to sacrifice the ultimate in his life to defend freedom, regardless of whether or not you agreed with him. He was over there protecting your right to be here and not agree. So that you can live free of the fear that people in other countries live with every day.”