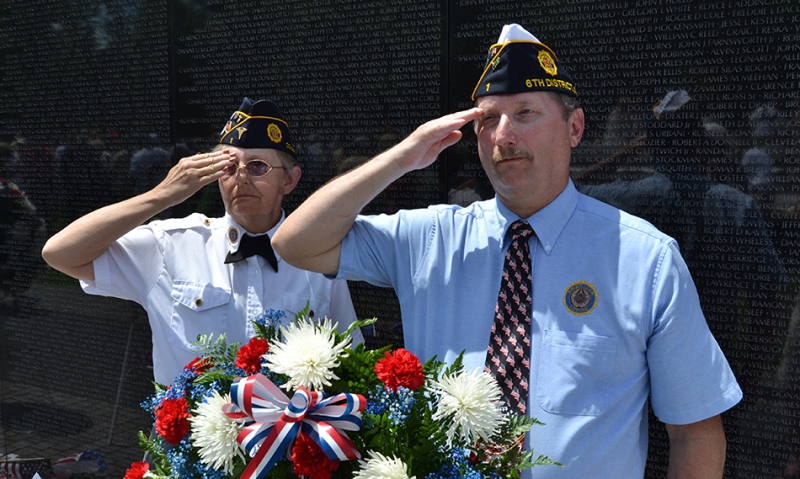 Legionnaires Dan and Clotilde Szelkowski of Denver presented The American Legion's wreath during a ceremony at the Vietnam Veterans Memorial on May 26, 2014.

This year, 14 more names were added to the Vietnam Veterans Memorial in Washington, D.C., bringing the number of American servicemembers killed or missing in action from the Vietnam War to 58,300. The names were honored on Memorial Day during a ceremony at The Wall, where Dan and Clotilde Szelkowki of Denver presented The American Legion’s wreath. The husband and wife are Vietnam War veterans, Dan served in the Air Force and Clotilde served in the Navy.

Remembrance was on the minds of many Legionnaires attending ceremonies throughout the weekend, including 83-year-old Steven Sabo, an American Legion Rider who participated in the Rolling Thunder event. He made the trip "to honor other veterans and those who didn’t come back.” On his way up I-95, Sabo said several veterans on motorcycles passed him in his car, which carries a “Veteran” sticker.

“They all honked their horns, and I’m riding down the road with tears in my eyes,” he said. To him, Memorial Day means “a lot of pride. Be proud of your country, be proud of your veterans.”

Sabo joined the Navy in 1951 and served as an engineman on the destroyer escort Howard D. Crow during the Cold War, and it was especially cold on escort duty in the North Atlantic. During his four-year hitch, he met his wife Irene, a Navy WAVE. They’ve been married for 58 years.

Robert Sussan is an Army veteran who served with its Criminal Investigative Division Command in Camp Zama, Japan. Chairman of The American Legion Riders in Virginia, he spoke at a patriotic ceremony on May 25 at Post 177 in Fairfax, Va.

“We do not honor just those with the highest medals or even those who participated in the most hellacious firefights," he said. "We honor more than one million American men and women who lost their lives defending America. “Long after the guns have been silenced and the bombs stop exploding, the children of our fallen warriors will still be missing a parent, spouses without their life partners, and parents will continue to grieve for their sons or daughters that died too early. We need to be there for them, not just as members of The American Legion but as American citizens.”

During that same ceremony, Irina Price – a member of Bugles Across American – sang the national anthem and played Taps. She is the grand-daughter of a Marine Corps veteran who flew nearly 50 combat missions in the Pacific Theater during World War II; and her step-father is a Marine Corps colonel.

Michael Kimlick flew helicopters for the Marine Corps for 23 years before retiring. He now serves as commander of Post 177. “To me, this is the most important weekend, when you honor all those who died for their country – in wars and in-between wars. This is the one day we step aside and think about those who are no longer with us.”

Americans should be grateful, Kimlick said, that men and women are still willing to sign up and defend them. “I don’t think they appreciate it. There’s people who have given their lives, or lost arms and legs, and that has impacted a lot of families. I get emotional about it because I love this country. I gave 23 years, and I feel like I’m still giving back by working with The American Legion.”