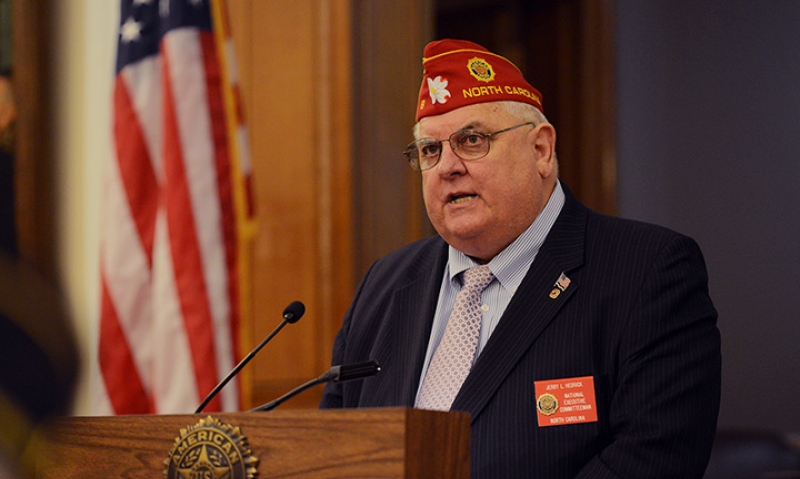 American Legion Past National Commander Dan Ludwig first met North Carolina Legionnaire Jerry Hedrick in the late 1980s. A friendship formed later – one that left Ludwig among those mourning the loss of Hedrick, who passed away unexpectedly Aug. 25 during the national convention in Charlotte, N.C.

“The more I had exposure to Jerry, the more I liked Jerry,” Ludwig said. “Jerry Hedrick and (I) never had a disagreement. The reason he had a big body was because he had such a big heart. He was a team builder, and he loved his wife, his country, The American Legion and everyone in it. He worked hard to include everyone, and he was pretty successful at that.

“He was an amazing man, and he will be missed for a long time by a lot of us.”

Past National Commander Jake Comer, whose tenure leading the organization coincided with Hedrick’s year as department commander, said Hedrick’s work on the Resolutions Subcommittee was critical. “Nothing happens in The American Legion without a resolution,” Comer said. “If we had an issue come up during the national convention or the NEC meetings, we had to depend on Jerry to put the resolution through. He was a stalwart in those types of areas.”

Comer had known Hedrick for four decades and had developed a close friendship with him. “He was just a super, super guy,” Comer said. “He’s really going to be missed.”

"Jerry was Mr. American Legion," said North Carolina Adjutant Frank Stancil. "I don't recall any circumstance where you could go to Jerry and not get a solution on anything American Legion. And he was his post's commander. With all of the things he was involved with on the national level, he was still involved heavily in his own department and in his own post."

Department of North Carolina Commander Gaither Keener had known Hedrick for more than 27 years. Hedrick went from being a mentor to Keener to “more like an older brother,” Keener said. “As we got older, we talked weekly, and we became sounding boards for each other.”

Keener praised Hedrick’s ability to stay non-political in key issues. “He was a statesman, and he would try to bring everyone together for the common good of The American Legion and for veterans,” he said. “He was the best statesman I’ve ever seen who wasn’t trained to be a statesman.”

Hedrick was serving as president of the North Carolina National Convention Corporation when he passed away. “One of the things Jerry was happiest about was the success of the party following the (national convention) parade,” Comer said. “That was his idea, and it really came to pass.

“Maybe my last memory of Jerry was during that party. We had ice cream together. It’s really a simple thing, but it was very nice.”

When it comes to replacing Hedrick, "You don't. You just don't," Stancil said. "Hopefully you have two or three people step up and take on some of the responsibilities he had. But he just had so much knowledge, and The American Legion was his life.

"And he was a like a brother to me. I've been adjutant for 12 years, and he's called me two to three times a day every day during that time. I'm really going to miss those calls."