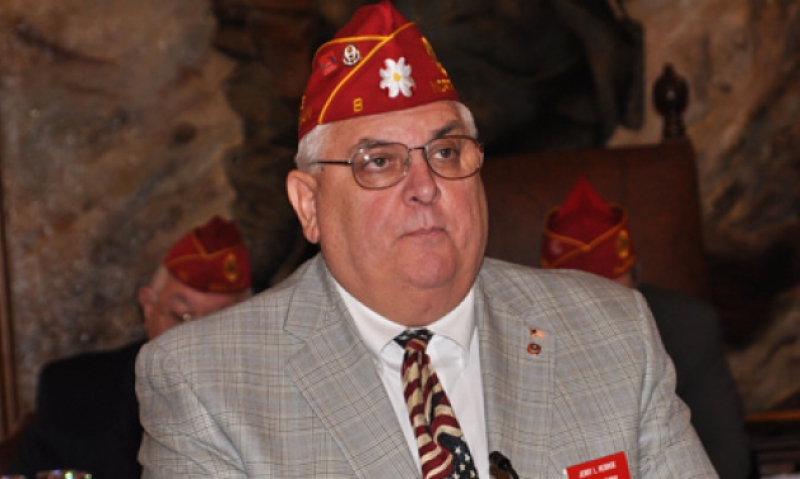 On Sept. 18, U.S. Sen. Richard Burr of North Carolina took time on the Senate floor to honor longtime American Legion National Executive Committeeman Jerry Hedrick, who passed away in his home state during the 2014 National Convention in Charlotte, N.C.

The following is the text of Burr’s speech.

Mr. President, as the ranking member of the Committee on Veterans’ Affairs, I rise today to pay tribute to Jerry L. Hedrick, a lifelong North Carolinian, distinguished public servant, a United States Army veteran, and a leader of distinction at many levels in the American Legion, who died on August 25, 2014, concluding a life of superb and selfless service to the veterans of North Carolina and America. Jerry passed away on the eve of the American Legion’s National Convention in Charlotte, NC, an event he had been actively planning for almost until the moment his life ended. There is no doubt in anyone’s mind that Jerry put his heart and soul into the Legion’s mission throughout his life.

Jerry was born in Lexington, NC a year after the end of World War II and spent his younger, formative years in Davidson County, where he was graduated from Lexington Senior High in 1965, just as the war in Vietnam was escalating. Jerry joined the United States Army in 1966 and was trained as an armor crewman. He was subsequently assigned to Alpha Troop, First Squadron, of the Fourteenth Armored Cavalry Regiment, based in Fulda, Germany. This was in the early years of the Cold War that pitted North Atlantic Treaty Organization forces, commanded by the United States, at outposts and in forward bases along the border that divided a free and democratic West Germany from a repressive communist regime in Soviet supported East Germany. The open lowlands around Jerry’s base were known then and for the next 25 years as the Fulda Gap, where NATO expected a Soviet invasion of Western Europe would come through. At that time America’s attention was turning toward Southeast Asia and the hot war there, but Jerry and his fellow soldiers had a vital mission, one that would continue until the demise of the Soviet Union.

Jerry received an honorable discharge from the Army in 1968 and returned home to North Carolina. Soon after, he joined American Legion Post 8 in Lexington and found work as a mail carrier with the U.S. Postal Service, where he worked faithfully from 1969 until 2001. In the early post-Army years, Jerry somehow found the time amidst all his activities to study and obtain a business degree from Rowan Technical Community College. Years later, when Jerry was asked what spurred his decision to join the Legion, he simply stated, “I was asked by fellow workers and I wanted to help veterans.”

Throughout his over four decades of service to the Legion and to North Carolina’s veterans, Jerry Hedrick held almost every leadership position from Post Financial Officer, to Post Adjutant, to Post Commander, and went on to serve as both a Department and District Vice Commander and Commander, as well as rising to National level committees that addressed Americanism, Military Affairs, and International Affairs. Jerry was also the North Carolina Department’s representative to the dedication of the Vietnam Veterans Memorial in Washington DC and would say in later years that some of his fondest memories were from his time on the National Executive Committee, which is responsible for drafting the annual budget and signing off on the American Legion’s spending.

While he devoted much of his life’s work to the Legion and to veterans’ issues, Jerry Hedrick was also devoted to his wife Marie and to his family, and a prominent figure in his community, through volunteerism for the Moose, Masonic, and Elks Lodges.

When I reflect on the sum total of Jerry’s life, I see a man who knew that the calling of service and the value of fellowship were essential elements of the American experience and what truly bind us together. As an advocate for veterans, his legacy is typified in the old saying that the measure of a man is not what he does but what he gives. Jerry lived those words until his last day with us.

I offer his wife Marie and his entire family my deepest condolences. They, all of North Carolina, and this Nation, have lost a lifelong friend, a true gentleman, a stalwart leader for veterans, and a role model for those committed to community and national service.