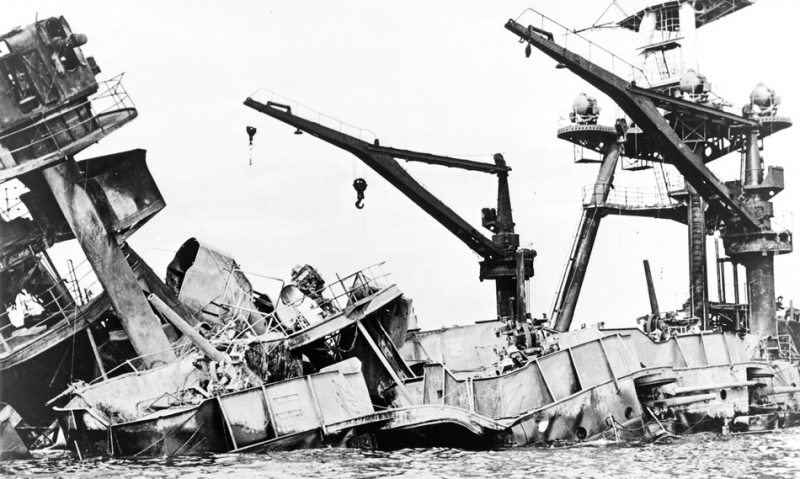 The Japanese attack on Pearl Harbor destroyed the U.S. Pacific Fleet, or so many Americans believe. But six months later, that “crippled” fleet defeated a massive Japanese task force at Midway.

Ninety-six ships were in the Navy yard at Pearl Harbor on Dec. 7, 1941. Of these, the Japanese sank or damaged only 18, and 11 were back in service within a year.

The attacking Japanese fleet, led by Vice Adm. Chūichi Nagumo, had six aircraft carriers and two battleships, plus cruisers, destroyers and support ships. It arrived 275 miles northwest of Oahu, and at 6 a.m. launched the first attack wave of 183 aircraft; this was followed by a second wave of 168 planes. The first wave arrived over Pearl Harbor at 7:55 a.m., and the attack continued until 9:45 a.m.

The Japanese pilots were assigned to attack the battleships and aircraft carriers first. Cruisers and destroyers were the next priority. The dive bombers were set to attack ground targets. Fighters were to strafe as many parked aircraft as possible to ensure they did not get into the air to interfere.

Staff officers urged Nagumo to launch a third wave to strike the Navy yard, oil tank farms and submarine base at Pearl Harbor. Military historians say the destruction of these properties would have damaged the capabilities of the U.S. Pacific Fleet a great deal more than losing its battleships. Indeed, “serious operations in the Pacific would have been postponed for more than a year,” said Adm. Chester Nimitz, who later commanded the Pacific Fleet. “It would have prolonged the war another two years.”

Nagumo decided to withdraw, believing his force was within range of U.S. land-based bombers. Also, a third wave would require significant preparation and turnaround time, and would have meant returning planes landing after sunset. This was a considerable risk because they had not developed night carrier-landing techniques. Weather had deteriorated since the second wave, and rough seas would complicate takeoff and landing for a third wave attack.

The Japanese attack, which was a great tactical success, failed in the larger goal of destroying the U.S. Navy in the Pacific. Although the battleships were damaged, the failure to destroy the repair yards enabled the Americans to eventually return six of the eight battleships and all but one of the other vessels to active duty. The fuel reserves enabled the remainder of the fleet to continue to operate, and failure to destroy the submarine base allowed submarines to play a major role in the Pacific war.

Along Battleship Row, Arizona, California and West Virginia were sunk; Nevada was grounded and Oklahoma later capsized; and the three other battleships were damaged. At the airfields, 164 U.S. planes were destroyed and 128 damaged. U.S. military fatalities were 2,335, along with 68 civilians, and 1,178 wounded.

Arizona, which became a memorial of the attack, contains the remains of more than 900 men. Utah is the tomb of another 60. A million people visit Arizona every year.