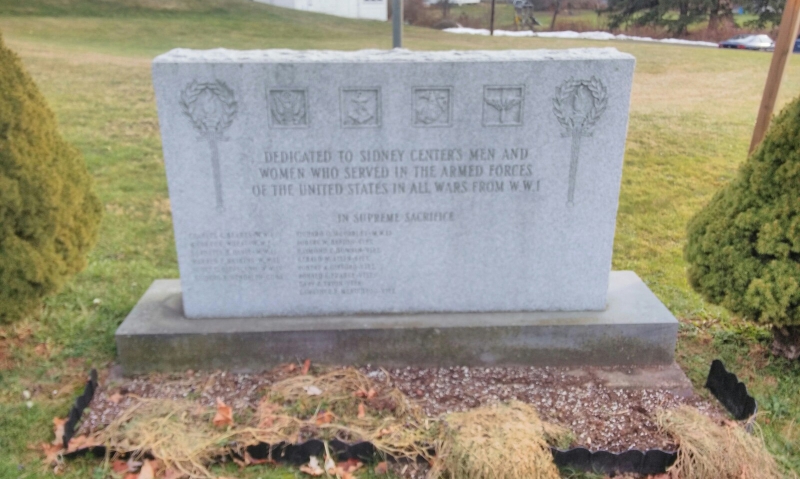 The monument in Sidney Center is dedicated to the men and women who have served in all wars.

The people of Sidney Center, N.Y., began to be wary of any dark-colored, unrecognized car that entered town.

It was 1968, and usually it was a black car that drove slowly into the tiny town of 500, nestled in the foothills of the Catskill Mountains. The car would stop in front of the Methodist church – the only church in town – and pick up minister Harold Wheeler before heading for a soldier’s home.

In a period of less than 90 days, the car pulled into Sidney Center seven times as the Vietnam War raged during the Tet Offensive in 1968. Wheeler conducted services for those seven sons of Sidney Center.

It would have crushed a town of any size, but in one this small everyone knew everyone else, making it even worse. But they did something about it, deciding to pay homage to these heroes.

In 1968, Sidney Center had no post office, no bus service, no school system and not even a single police officer. It also had no lack of love of country or shirking of responsibility to it, and residents believed in saying thank you to those who agreed to put their boots on the ground.

Patriotism and service to country are no stranger here. This hamlet lost two sons in World War I and four in World War II before losing seven in that 90-day period in different places, at different times and for different reasons.

The first time the black car came to Sidney Center, it went to the Barton home. Robert Barton was 19 when he enlisted in the Army. He married his high school sweetheart, Audrey Hathaway, before joining. He was a private first class in the 101st Airborne when he was taken ill by malaria in Vietnam. He died in an Army hospital in Manila on Jan. 9.

Gary Tryon was 22 when he enlisted in the Army. He was originally a cook but transferred to artillery. Spc. 5 Tryon was in the 25th Infantry and died in Hua Nghia, Vietnam, on Jan. 13 when an artillery shell exploded. He was awarded the Bronze Star for bravery.

Gerald Allen, 21, was drafted into the Army and was a private first class in the 1st Cavalry Division when he died of small-arms fire on Valentine’s Day in Thua Thien province. He was a volunteer fireman in Sidney Center before he was called to the Army, and was in Vietnam only 21 days before he was killed in a Viet Cong attack. It took the Army longer to send his mother his belongings – his high school diploma, his watch, fire department papers, a check for $1.60 that was in his wallet, and his Bronze Star and Purple Heart - than the time he spent in Vietnam.

The black car stopped at the home of 20-year-old Robert Gifford, an Army draftee who was killed by Viet Cong small-arms fire in Binh Long on Feb. 3. He left an 18-year-old widow, his high school sweetheart Joyce Merman Gifford, in Sidney Center. Less than a month after Gifford was killed, his 14-year-old brother took his own life in Sidney Center. .

Ronald France wanted to be a Marine from the time he was just a little boy. Everyone called him Ronnie. He joined the Corps when he graduated from high school. He died at 23 as a Marine lance corporal and machine gunner on March 23 when his bunker collapsed during combat in Quang Tri province.

Ray Downin was known by his friends in Sidney Center as Butch. He was 21 and a sp 4 Army draftee, and died on March 3 when a hand grenade exploded in Thua Thien. He left his parents, a brother and twin sister in Sidney Center. He was awarded an Air Medal, Purple Heart and Bronze Star for bravery.

It was pure irony that the local papers printed the news of his death on April 1 – it shared a headline with one announcing that President Lyndon Johnson was not going to run for re-election and was calling a halt to air attacks in Vietnam.

Lawrence Merschrod, 20, was the last of the seven to give his life to his country. He was drafted into the Army and was serving proudly when he died Sept. 27 of Viet Cong small-arms fire in Dinh Tuong province.

On May 20, 1968, Vice President Hubert Humphrey wrote the following to Edwin Lally, a community leader in Sidney Center who volunteered to conduct the Memorial Day service in 1968, as the town prepared to give tribute and honor the first four sons to die in Southeast Asia:“Would you please express my heartfelt appreciation to the parents of Raymond Downin, Robert Gifford, Gerald Allen and Robert Barton for their great service and sacrifice for their country. These men died for the cause of freedom. They gave their lives in the fight against aggression. May I share humbly in your salute to them. I would appreciate your reading this letter at your Memorial Day dedication.”

It was indeed read; no one could imagine that by September there would be three more.

Sidney Central High School was the school that served Sidney Center. The class of ‘66 was devastated; four of the seven – Allen, Downin, Gifford and Tryon – graduated with them. Their classmates have paid homage to them at every one of their reunions, from 1968 to the present day.

Sidney Center would never be the same, but it would also never forget.

In a town of 500, with virtually no industrial base, the townspeople were able to raise funds to build a monument to these young men and other veterans who died in service to their country. Those funds came from a populace that survives mainly from small farms.If you ever visit this town, population now about 1,000, you will see the monument standing in front of that lone Methodist church. The town of Sidney, about 10 miles from Sidney Center, put up its own monument to the Sidney Center Seven, presented on Oct. 18, 2002.

The Maywood Station in Sidney Center is the actual train station for the town, as well as a history museum dedicated to the Vietnam heroes in particular. There is a shrine to all seven of these boys, who became men all too soon. There are plaques, newspaper clippings and mementoes. The spokesman for the center is Darryl Loker. When asked if there is a charge for admission to the exhibit, he laughs and says, “No … and if you come visit we will probably give you coffee and cookies.”

Welcome to the real America.

Don Bradley is an Air Force veteran and retired broadcasting professional. He lives in Waco, Texas.