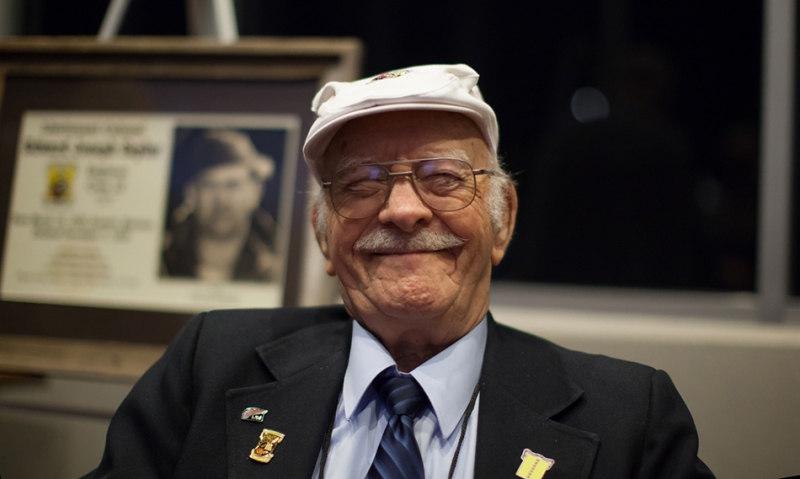 Lt. Col. Edward Saylor, photographed during the final toast of the Tokyo Doolittle Raiders at The Air Force Museum in Dayton, Ohio on Nov. 9 2013. (Photo by Lucas Carter/The American Legion)

Retired Lt. Col. Edward J. Saylor, one of the last surviving members of the Doolittle Raiders, has died. He was 94.

Saylor, flight engineer of crew 15 on the famous Doolittle Tokyo Raid, passed away Wednesday at his home in Enumclaw, Wash., surrounded by his family. He requested a quiet burial with his wife of 69 years, Lorraine.

He was born on March 15, 1920, in Brussett, Mont., and enlisted in the Army Air Corps in 1939. Saylor volunteered to go on a secret mission which turned out to be the legendary Doolittle Tokyo Raid which took place on April 18, 1942. He served throughout World War II as an enlisted man, both stateside and overseas, then was commissioned in October 1947. He served until he retired as a lieutenant colonel. His decorations include the Congressional Gold Medal which was recently award to the Doolittle Raiders, the Distinguished Flying Cross, Air Force Commendation Medal and the Chinese Army, Navy and Air Corps Medal, Class A, 1st Grade.

In the fall of 2013, Saylor and two of the other three last remaining Raiders appeared at a final toast honoring the famous airmen at the National Museum of the U.S. Air Force in Dayton, Ohio. Saylor, a member of American Legion Post 110 in Washington, reflected on his role in history at the event.

“I can thank the country because they appreciated what we did,” he said in an interview with The American Legion Magazine. “It even took us awhile to realize what we did at the time. The war was on, so our job was to drop some bombs. … So we did what we had to do.”