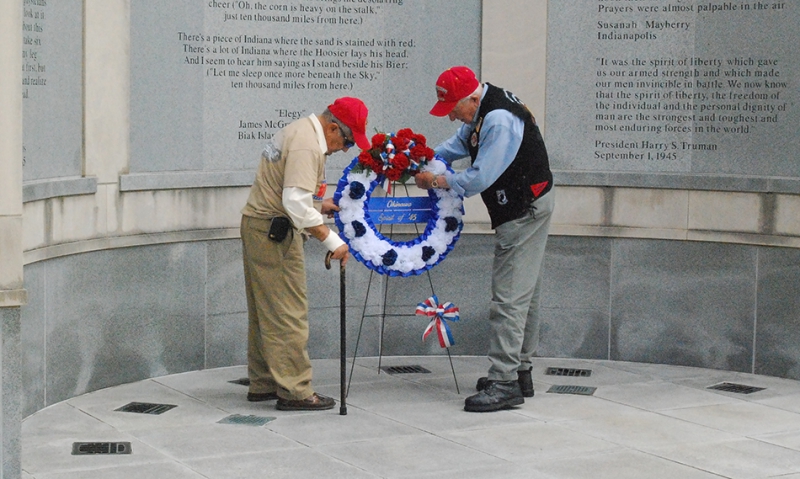 Dr. E. Bruce Heilman (right), who is journeying across the United States on his motorcycle to raise awareness for the end of World War II, was joined by a fellow Okinawa veteran in a wreath-laying ceremony in Indianapolis on Sunday. (Photo by Andy Romey)

Dr. E. Bruce Heilman had never met the other World War II veterans assembled at the Indiana War Memorial Plaza in Indianapolis, but the group embraced like long-lost friends.

Heilman, who is trekking 6,000 miles across 20 states on his motorcycle to raise awareness for the 70th anniversay of the end of World War II, made a stop in Indianapolis on Sunday for a wreath-laying ceremony at the World War II memorial located among the city's downtown war memorials. Heilman was joined by a group of around 10 local veterans who also served in the Pacific Theatre.

When Heilman arrived at the base of the semi-circular granite memorial, he greeted each of the men, sharing hugs and handshakes as they bonded over war stories that are now seven decades old.

"No one really understands it unless they were there and engaged," Heilman said. "We all understand each other. We’re blood buddies."

Heilman, the longtime chancellor at the University of Richmond in Virginia, was on the 28th day of a 34-day journey that will end in Washington, D.C., where he will serve as the grand marshal of the World War II section of the National Memorial Day Parade held on Memorial Day. He started in his home state of Virginia at the end of April, rode to San Diego where he went to basic training as an 18-year-old, and is now in the home stretch of his trip as he approaches the Nation's Capitol.

Buglers played "Taps" as Heilman and another Okinawa veteran laid the wreath at the memorial on Sunday. The wreath was placed at the foot of the memorial to honor the 14,000 lives lost in Okinawa, and the lives of all U.S. service men and women who have perished. Several local Gold Star families were also on hand.

"We’re celebrating the lives of those who died in battle," said Heilman, a member of Maj. Charles A. Ransom American Legion Post 186 in Midlothian, Va. "We are saying to the world, 'This is an important date, and you ought to acknowledge it and be proud of your country and be proud of the guys who died saving your county.'

"You ought to be willing to tell your children or grandchildren that it is important to rise when you are called, to stand firm for your country.'"

Dubbed the "Spirit of 45 Ride," Heilman's trip will culminate at Post 177 in Fairfax, Va. From there, he'll join the Legion Riders in their Run to the Thunder ride to Rolling Thunder, the annual Memorial Day weekend motorcycle ride that honors fallen servicemembers, former prisoners of war and warriors listed as missing in action.