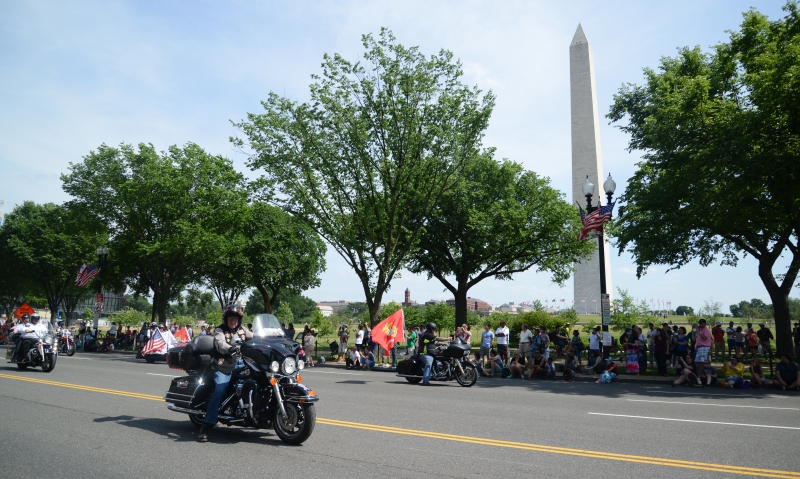 Dr. Bruce Heilman, accompanied by fellow Legion Riders, ride past the Washington Monument during the annual Memorial Day Parade in Washington, D.C., on May 25. (Photo by Andrea Dickerson)

For Dr. E Bruce Heilman, his 6,000-mile motorcycle trek began at Marine Corps Base Quantico in Virginia and ended in Washington, D.C., just in time to observe Memorial Day. His 34- day trip spanned 20 states across the United States - all for a meaningful mission.

"The purpose was for me to go shouting, 'The British are coming!” Heilman said. “But more importantly, they are coming to celebrate the 70th anniversary of the end of World War II."

Heilman, a World War II Marine Corps veteran and champion of World War II advocacy, believes that veterans from all generations deserve to be recognized – especially during monumental occasions like Memorial Day.

"To go beyond World War II and apply our appreciation, commendation and celebration to veterans of all wars," he said. "This is for all you Marines, sailors, Army and Air Force. The world needs to take note that these are the people that have made our democracy what it is. That democracy does not sustain itself ... it is because of the veterans that signed on the dotted line and were willing to die for our country. Freedom isn't free – it's worth dying for."

During his journey, the Marine found solace and comfort in American Legion Riders from posts across the county who jumped on their bikes, riding along as far as they could with him and providing assistance during less-than-desirable riding conditions.

"During my trip I learned more about The American Legion and the Legion Riders than you can ever imagine," said Heilman. Sometimes the Riders accompanied him from state to state, and a few stuck with him throughout the ride. A few of those Riders and others from different posts joined the Marine while he led their detail through the Memorial Day parade along the National Mall. This marked the first time Legion Riders actively participated in the prestigious event.

"They knew exactly where I was going no matter the state or city,” Heilman said. “They paved the way. They were hospitable. (They were) mostly young former military who thought it was a good thing to help me do what I was doing."

Though the trip was long and treacherous, the 88 year-old Marine said he stayed busy and stopped often to visit high schools and colleges. He also met fellow World War II vets who were also stationed in Okinawa during the conflict.

"I made sure I reminded the country – people of all ages – what WWII was all about,” Heilman said. “I was able to do a lot of talking and a lot of riding. I got to portray from one who lived during that time, the Spirit of ’45. We were a bunch of kids, but we didn't know it. We were able to sustain the battle, and we believed in ourselves."

Heilman, a member of Maj. Charles A. Ransom American Legion Post 186 in Midlothian, Va., said the cross-country opportunity meant the world to him. Along the way, he took a moment to reflect on the battle buddies he lost on Iwo Jima.

"There is a reality to war and willingness to die for a country that is so free and so giving," he said. "I flunked out of high school, then served four years in the military. When I came back I got the G.I. Bill and later ended up as a university president. Something like this could only happen in the United States. I'm willing to fight for that kind of stuff. That's why I did it."

Never putting the credit all on himself, Heilman selflessly kept the spectators that came out to mark the occasion and remember the fallen in the back of his mind.

"I thought about the people that come out to celebrate the veterans on Memorial Day," he said. "They line up out in the sun to applaud, and from their hearts really express their appreciation for the people that serve in the military."