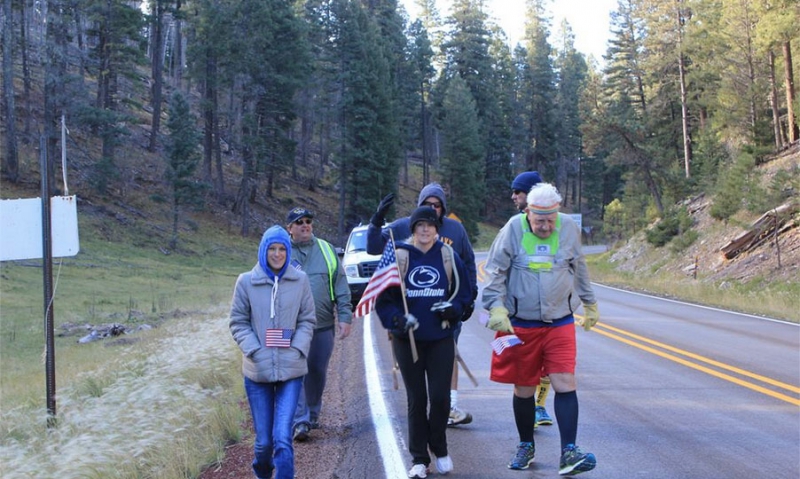 Ernest Andrus, a 91-year-old World War II veteran and Legionnaire, is running across the country to raise funds to bring the LST 325 back to Omaha Beach before the 75th anniversary of World War II.

On paper, and on websites the world over, Ernest Andrus is officially running across the width of the United States to raise funds needed to get a ship across the Atlantic Ocean in time for the 75th anniversary of the day American troops stormed Normandy’s beaches in June of 1944.

He and many others would love to see the LST 325 sitting where 75 years earlier it delivered men and equipment to Omaha Beach on one of the most important days of World War II.

But that isn’t likely, acknowledges Andrus, a member of American Legion Post 6 in Arizona. The ship is in good condition, but he isn’t anywhere close to raising the millions of dollars it would take to meet his goal.

So Andrus, more than 1,500 miles into his journey, might tell you he’s raising money to help keep the ship in shape so that it can continue to serve as a floating museum, traveling throughout the United States.

Or he could tell you that he’s simply never shied away from a challenge. And at 91 years old, Andrus has set himself up for the adventure of a lifetime.

What Andrus might not say, and might not even fully realize, is that he is roaming the sometimes lonely highways of the southern United States touching the lives of one person at a time and kindling an interest in historical events that to so many seem so far in the past.

It all goes back to the LST, for Andrus. It’s the type of ship he served on himself during the war.

LST stands for “landing ship, tank,” meaning it was the type of ship that could float right near the shore to deliver troops and equipment, including battle-ready tanks.

More than 1,000 of these ships were built for World War II, including the LST 325, which saw action during invasions of Italy, Sicily and, most famously, Omaha Beach on D-Day.

Andrus served on a similar ship, the LST 124, in the Pacific, doing “island hopping.” They dropped off supplies and troops to take islands from the Japanese, then came back to pick up the men.

According to the LST 325 Memorial website, the LST 325 was transferred to Greece in 1964, where she served until 1999. The USS Ship Memorial, Inc., purchased the ship in 2000. Veteran sailors, including Andrus, sailed her back to the United States, arriving in Mobile, Ala., in 2001.

Since then, the ship has served as a memorial and floating museum, making trips around the country from her home port of Evansville, Ind. She is one of only two or three of her kind still in operation.

Andrus runs three days a week, and if you want to join him for any of those runs, you’re more than welcome. He’ll warn you, however, that since his trek's beginning in San Diego in October 2013, his pace has slowed considerably. Once at a 17-minute-per-mile pace, Andrus completes a mile in more than 21 minutes these days, and he limits himself to six or seven miles per day, meaning the journey will take more than three and a half years.

But at that pace, Andrus will tell the story of how he sailed on the LST 325 from Greece to the Mobile port 14 years ago, a feat many thought impossible and documented by The History Channel.

He might tell stories about his own time in the war, or his years working in management at grocery stores before retiring in 1984 and getting a turn in the Olympic torch relay.

He may mention his family - a number of children and stepchildren - or that he outlived three wives, including one who died while Andrus was on his current run across the country. His wife’s death was one of the only times he came in from the road - two weeks around Christmas each year, and three when he got word that she’d had a stroke.

“I held her hand for a week until she quit breathing, and then I went back to running,” he says. “It’s good therapy.”

Andrus needs people alongside him, not just because he sometimes finds himself alone along those stretches of hot, dry highway. But because he wants people to hear those stories before the men and women of his generation aren’t around to tell them any longer.

“When we’re gone, we want it to keep going so that people can know what they need to know,” Andrus says of raising money for the LST 325. “Freedom is not free.”

Joan Fradenburgh has heard those stories. She’s run 16 legs of the journey with Andrus.

The two met when Fradenburgh saw Andrus participate in a 200-mile relay race some years ago. She invited him onto her team for another race, and a friendship ensued.

When Fradenburgh saw that Andrus was nearing her then-hometown of Wickenburg, Ariz., she decided to meet him on the highway.

“It was out in the middle of nowhere, and I went out to run with him,” Fradenburgh says. “I just felt like I wanted to support him and what he’s doing. I know he’s sometimes running out there along the highways without support. A lot of times, it was just the two of us.”

The runs, and talks, mean a lot to Fradenburgh.

“It’s very inspirational for everyone, especially younger people for whom World War II is ancient history, to see what our service people did during that war,” she says. “It is an inspiration to a lot of people who say ‘I’m too old.’ You’re not too old. You may be physically unable to do something, but you can find a goal.”

Carlos Cano, a retired Marine from Corpus Christi, Texas, had joined Andrus for 25 legs of the journey as of mid-June. As he travels the country on his motorcycle during his retirement, he plans to run more with the man to whom he feels he owes gratitude.

Cano can talk a lot about the importance of Andrus’ message. He believes fewer people are interested in serving their country, and Cano wants people to see the type of man who served during World War II, to hear why he did it and to see the conditions he endured on a ship to protect his country.

“He wants our kids to know where we come from,” Cano says. “It’s important to bring that awareness to those kids.”

Cano also believes Andrus’ character makes him a great person for the job. He tells a story about how the group one day believed it had gotten back to the stopping point from the last run and gone on for the day. Later, Andrus realized they missed the stopping point because the road made a jog they hadn’t accounted for.

“He made us go back later that day and run that 100 yards,” Cano says.“Growing up as a kid, I didn’t have my father around. He’s like a father to me.”

Many patriotic and veteran organizations have stepped onto the road to support Andrus along the way, including The American Legion. Around Goldthwaite, Texas, Duane Rawson drove a support car through the county.

Rawson, commander of Goldthwaite American Legion Post 289, says most of the post’s members are in their 90s now and served during World War II. He thought it was especially important to help Andrus in any way they could.

“He’s a brother veteran,” Rawson says. “To see a 91-year-old person going out and doing this, I hope it sets something off for these young kids. If you have a good goal in life, if you work hard, you can accomplish that.

“I just hope these youngins see that,” Rawson says.

It would be easy to believe Andrus isn’t going to make it to Brunswick, Ga., where he plans to complete his run sometime next summer.

At 91, Andrus is probably hurting some days more than he’ll let on.

“I feel great,” he insists.

And the donations aren’t coming in like he expected. As of early June, Andrus had collected about $5,000 for the LST 325, far short of the millions that would be required to get her to France in four years. People seem more interested in donating for the gas Andrus needs to move his RV down the road or meals once he gets into their town.

But he still makes sure the message is about the ship.

“Whatever money I can raise I’ll use to help keep that ship running for years to come,” Andrus says. “A sailor always calls his ship a lady, and this lady is a hero.”

There are times when Andrus comes up to a town where word has spread, and he’s met by large crowds. There are fish fries held for him, and he gets to speak to lots of people. He gets to tell more of his stories.

“It does my heart good to see hundreds of school kids out there waving flags and chanting U-S-A,” Andrus says.

While everyone wants to see Andrus complete his journey, even his biggest supporters wonder sometimes.

Even Andrus’ daughter, Cathy Rutledge, was worried when her father announced his plans to traverse the United States. She was worried about him being struck by a car, having a health emergency on one of his runs alone or simply that someone might try to harm or take advantage of him.

Rutledge thought he might go a few days and realize he’d bitten off more than he could chew. But that didn’t happen.

“I have to admit, when I first heard about it, I thought he had lost it,” Rutledge says. “But people have been really great. He’s having a great time. He’s just totally amazed us all that he’s made it this far.”

Rutledge joined her father in mid-June near Waco, Texas, and said she’s in awe of him. She always has been, and she’s hoping it all ends how Andrus sees it in his mind.

“He’s such a positive guy,” she says. “There is no telling how it’s going to end. But he is determined.”

Andrus knows there’s doubt, but none of it is his. He’s pretty certain that in the summer of 2016, he’ll take a splash into the Atlantic Ocean. He’s never pictured it any other way.

“How can I miss when I have people all around the world praying for me?” Andrus says.

For more information: Andrus has a personal Facebook page, but he has maxed out on friends. You can follow him, however, by going to facebook.com/ernest.andrus.9. He posts regular updates about his runs, including how others can join him.