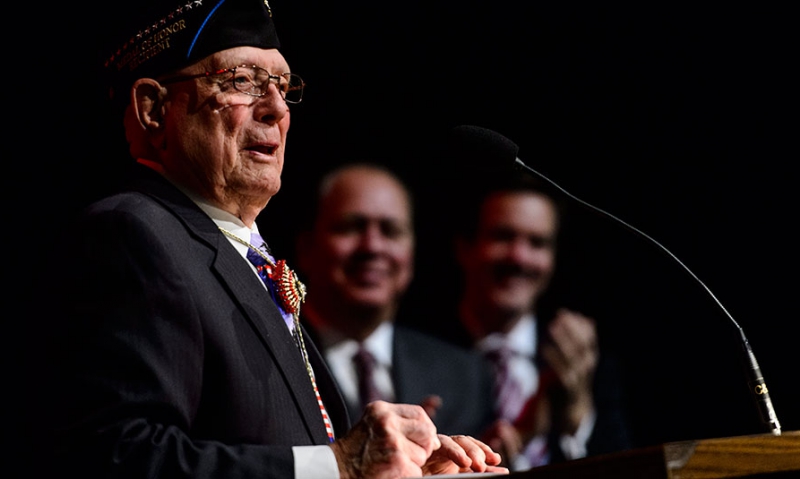 Hershel "Woody" Williams, the last surviving Congressional Medal of Honor recipient for his actions at the Battle of Iwo Jima, is honored during a ceremony dedicating a Navy ship after him on January 14, 2016. Photo by Sam Owens/The Charleston Gazette-Mail

More than 70 years after he stormed the beaches at Iwo Jima, Medal of Honor recipient and Legionnaire Herschel “Woody” Williams had an expeditionary support base (T-ESB-4) named after him by Navy Secretary Ray Mabus.

Williams, a lifelong West Virginia resident, stood at the podium during a ceremony at the West Virginia Culture Center in Charleston as Mabus told those in attendance, “I am honored to officially name T-ESB-4 the ‘USNS Herschel ‘Woody’ Williams’ in honor of a true Marine.”While naval vessels have often been named after Marine heroes of previous conflicts, naming one for a living individual is exceedingly rare. Over 300 people were present for the ceremony, including a contingent of about 35 fellow Legionnaires from the Department of West Virginia. Williams has been a member of Post 177 in Barboursville, W.Va., for 56 continuous years.

Williams is the last living recipient of the Medal of Honor from Iwo Jima, a battle that is preeminent in the hallowed legacy of the Marine Corps.

"Half of all of the Marine Medals of Honor came from that battle, fighting over some of the most inhospitable landscape on the planet and fighting against one of the most determined enemies we've ever had,” noted Mabus, who had visited the Pacific island last year with Williams. “I was in awe, absolute awe, of anybody who landed on those beaches, who walked across that black sand. A Marine was killed or wounded for every two yards of ground they gained. ‘Woody’ Williams stood out."

Williams’ Medal of Honor was awarded for his actions with First Battalion, Twenty-First Marines, Third Marine Division on Feb. 23, 1945. His citation details his actions. During the ceremony, Williams showcased his customary humor and charm. Noting he saw on his iPad that morning that Mabus was naming the ship after Herschel “Woody” Williams, the veteran said he was pleased to report he was still alive. In remarks filled with humor and poignancy, Williams even suggested a motto for the new ship: “Peace we seek, peace we keep.”

According to Mabus, the expeditionary support bases are the “ultimate mission platforms. They can do anything. They support everything from special ops and low-intensity conflicts to full-blown assaults. They get Marine equipment to where Marines need it.

“T-ESB-4 will be part of our fleet for decades. People not yet born will serve aboard T-ESB-4, and there’s good chance that for a lot of people around the world, that these will be the only Americans they ever see or meet. And they’ll get to learn the story of ‘Woody’ Williams, what he did, and the character that he displayed not only on that day, but for his entire life.”

West Virginia Sen. Joe Manchin was on hand for the ceremony and lauded the decision to name the ship after Williams, noting their shared upbringing in rural southwest West Virginia, and Williams’ dedication not only during war, but following it.

“His service to this country and this state has continued throughout his life,” Manchin said. “After retiring from the Marine Corps, Woody continued in public service at the Veterans Affairs Administration. For 35 years, he has been a tireless advocate for our veterans, and each and every veteran … I want to thank him for his great service to this great nation and this great state, and for showing us the power of patriotism, freedom and family.”

The naming of the ship is the capstone to an 18-year campaign by Vietnam Marine veteran Ron Wroblewski, who had a chance meeting with Williams while on vacation in Virginia Beach, Va. Wroblewski was undeterred by both Williams and the Navy predicting his campaign was impossible, amassing a list of 70,000 signatures in support of the initiative from 48 states. U.S. Rep. Evan Jenkins, R-W.Va., joked that he hoped the list wouldn’t be audited as he’d signed up several times when Wroblewski would set up a table on the grounds of the West Virginia Capitol and enlist the help of state politicians.

The Navy is expected to put the ship into duty in 2018. According to a press release from Mabus’ office, the 784-foot-long vessel will have a 52,000-square-foot flight deck, fuel and equipment storage, repair spaces, magazines and mission-planning spaces. It will accommodate up to 250 personnel and support multiple missions, such as air mine counter measures, counter-piracy operations, maritime security operations, humanitarian aid and disaster-relief missions, and crisis response operations. The vessel will be capable of supporting various helicopters as well.

Williams expressed some regret that his wife and mother were not alive to see him honored in such a way, and noted in particular that his mother wouldn’t understand how her three-pound baby boy turned 175-pound war hero had a ship named after him “that can’t even sail up the Monongahela River.”

"My life has been blessed with so many miracles, and this is another,” Williams said. “Why did I survive when others did not? How did my country, my fellow Marines and the Secretary of the Navy think me worthy to be honored with a ship? There's no way I can express to the secretary what’s in my heart. My vocabulary is not adequate to express the gratitude I have for him doing that.”