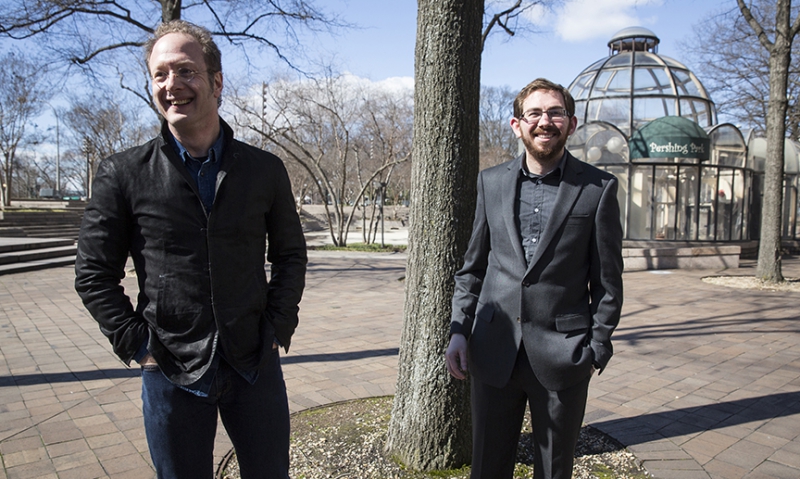 Sculptor Sabin Howard, left, and architect Joe Weishaar, speak with members of the media in Pershing Park, the site of the planned World War I memorial in Washington, D.C., on Wednesday, March 2. Photo by Greg Kendall-Ball

Architect Joe Weishaar and sculptor Sabin Howard, the design team selected to create a national World War I memorial in Washington, D.C., shared their vision for the project Wednesday in a news conference at the National Press Club.

Where other memorials begin with an empty canvas, this long-awaited tribute to Americans who fought in the Great War has a number of constraints built in, chief among them its location: a small urban park on Pennsylvania Avenue, next to the White House and a block from the National Mall.

Weishaar, a 2013 graduate of the University of Arkansas and an Eagle Scout, is enjoying the challenge.

“I’d never been to D.C. before I started this competition,” he said. “This has been a learning opportunity for me, about the city but more importantly about World War I and the sacrifice of our veterans in that war.”

With “clear eyes and clean vision,” Weishaar beat out more than 360 other designers with his proposed revamp of Pershing Park, which retains the statue of the general and its flanking walls but replaces a plaza that once doubled as a pond/ice rink with an elevated lawn, trees and bronze sculpture. Supporting walls will tell the story of the war through a series of relief sculptures and quotations from soldiers, generals and politicians.

“The park’s sunken center creates a blind spot within the city,” Weishaar said. “I want to raise that up and give that space back to the people of D.C. to use. It’s green space, it’s their urban space, and they should have it.

The green space is, quite literally, lifted by memorial elements that describe how World War I changed “the American people and the country as a whole, as it moved from being a peaceful isolationist nation to taking a step onto the world stage,” Weishaar said. “The design of the memorial itself facing eastward (toward Freedom Plaza) is that step out.”

The cost of the project is estimated at $38 million, which will come entirely from private donations. The goal for beginning construction is November 2017, with a dedication on the 100th anniversary of Armistice Day, Nov. 11, 2018.

To strengthen his design, Weishaar reached out to Sabin Howard, a master sculptor in New York. He immediately expressed interest, seeing a chance to do cutting-edge art.

“How often do you see a composition of 30 figures?” Howard said. “The opportunity here is amazing. This is a war that happened 100 years ago, so the art should have a connection to that period of time. We are taking an art form that was traditional and contemporizing it so it functions today.”

He and Weishaar see the relief sculptures as accessible and powerful.

“We want to bring the sculptures down to the people so they can touch them and have that sensory experience,” Weishaar said. “If they can create a memory of their own, in some way they’ve connected to the war. That’s really where the inspiration came from.”

Howard emphasizes that the memorial will not glorify war.

“It’s ultimately a glorification of humanity, the coming together of all these different races who form the United States,” he said. “In the compositions, there’s not a single figure that’s alienated. Every single figure is interconnected with the rest; they’re either touching fingers or looking at each other. There’s no sense of isolation or aloneness. That’s a much more modern concept. We’re going back to the idea that there’s a sense of unity in the universe, a sense of order.”

Howard thanked Weishaar for inviting him to be part of the project, saying he recognizes the responsibility that comes with it.

"My art is about serving the community, and I'm serving on many different levels here," he said. "I'm serving the country, I'm serving the D.C. area, and I'm creating art that's at the highest level because it represents something of such great enormity. As a human race, we carry with us emotional aspects: mad, glad, sad and scared. My hope is that when visitors come and see this art, there will be a sense of connection and a sense of unity ... that this is something that will create a visceral response."

Edwin Fountain, vice chairman of the U.S. World War One Centennial Commission and grandson of two World War I veterans, said the memorial has several distinct challenges to meet, including education and commemoration.

“Unlike the Vietnam, Korea and World War II memorials, we are not building a memorial to a generation of veterans that is still largely with us,” Fountain said. “We are building this memorial entirely in memory, not living tribute, to a generation that has gone before. Our view is that it should be timeless – that it should speak to people today and to people who will see the memorial 100 years from now.”

In 2014, Congress designated the memorial site at Pershing Park, "which is of great importance symbolically and at the heart of the federal city," he adds. Yet the finished product has to serve not just visitors to the memorial but "the workers, the residents, the hotel guests and other visitors who come to Pennsylvania Avenue and want an enjoyable, recreational urban park.

"Joe's design responds best to that multitude of differing challenges and does so in a way that is simple and restrained yet elegant and powerful."

From here, the memorial must go through regulatory review by various agencies and ultimately be approved by the National Parks Service.

Donate to the National World War I Memorial project here.