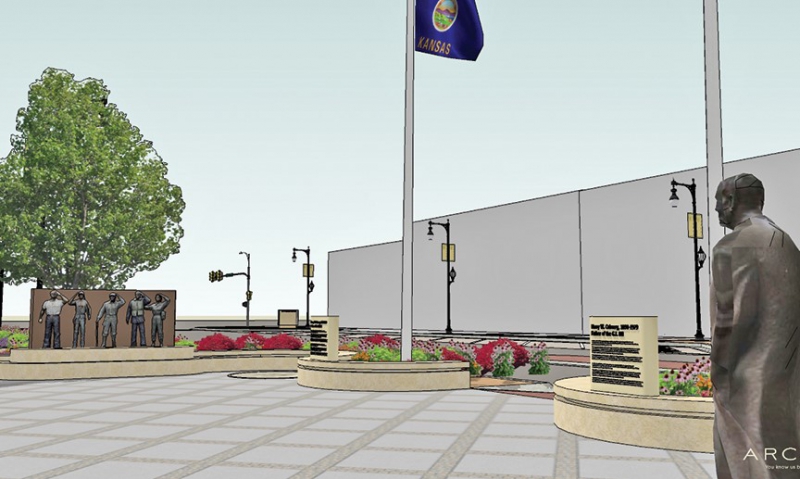 American Legion Past National Commander Harry Colmery assembled into one proposition what has been described as the most important social legislation of the 20th century: the Servicemen’s Readjustment Act of 1944, better known as the GI Bill.

On June 22, his contributions to American society will be immortalized with the dedication of Harry Colmery Memorial Park in Topeka, Kan., where he lived, worked and served veterans for most of his life. The dedication ceremony starts at 2 p.m., with comments from American Legion National Commander Dale Barnett, Past National Commander and current Department of Kansas Adjutant Jimmie Foster, and Pat Michaelis, chairman of the Colmery park project for the Downtown Topeka Foundation.

The setting, one block from the Kansas State Capitol building on South Kansas Avenue, includes a statue of Colmery, a World War I veteran who served as American Legion national commander from 1936 to 1937, along with one bronze panel that depicts U.S. military personnel in World War II uniforms. Another bronze panel shows the same World War II servicemembers as they transition to civilian lives with help from the GI Bill. On the back of each panel is an inscription, one describing the GI Bill and its legacy and another telling Colmery’s story as a veteran, Legionnaire and community servant. Six benches are positioned in the area, which is designed to serve as a venue for ceremonies.

The GI Bill is credited for lifting the United States out of the Great Depression, preventing economic catastrophe upon the return of troops from World War II, democratizing higher education, improving health-care services and benefits for disabled veterans, and launching thousands of small businesses across the country.

The American Legion’s Department of Kansas worked with volunteers and the Colmery family to raise funds, design and construct the memorial park. It occupies much of the 900 block of South Kansas Avenue in Topeka.

LEARN MORE ABOUT HARRY COLMERY AND THE GI BILL.