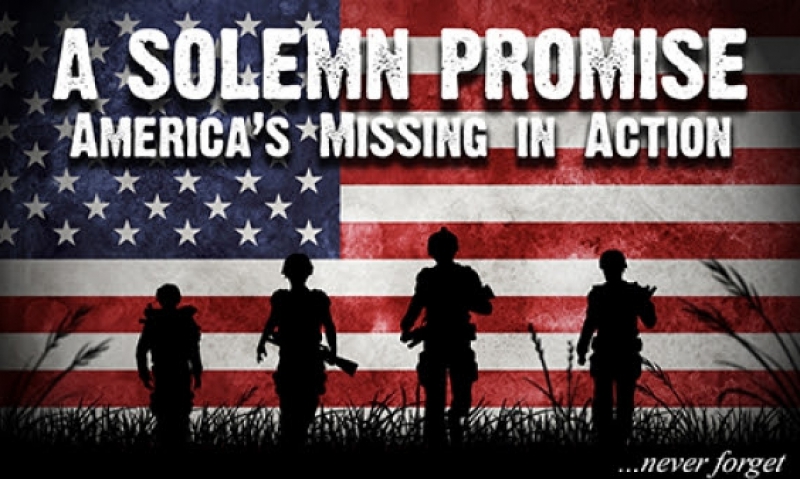 A new documentary film, "A Solemn Promise, America’s Missing in Action," is in production with the assistance of the Association of the U.S. Army (AUSA) and Storyteller Original Films, and with support from American Legion Hollywood Post 43. Writer-producer Richard Jellerson, a Post 43 member, has been passionately working on the documentary for nearly two years.

“This one is probably the most important documentary film I think I'll ever do," Jellerson said. “I just think this is a story every American should know about.”

Viewers of the film will witness the journey of America's promise to bring home America's missing in action soldiers, sailors, airmen and Marines, as well as watch interviews with family members and loved ones of the servicemembers missing from all wars. In his research, Jellerson interacts with many people who can’t seem to comprehend the number of POW/MIAs.

“When I first started working on (the film) and talking about it, I would tell people that there was over 82,000 (POWs and) MIAs, and everybody I mentioned it to just shook their head, ‘No, no, you mean 8,200,'" said Jellerson, who wants to bring more awareness to those missing in action and to reach a broader audience with his film.

For several years Jellerson has been working exclusively in documentary films and recently did a two-hour special for the History Channel called "The Personal Experience: Helicopter Warfare in Vietnam." He wants to bring those skills to this subject. “We're trying to do it with the production values of a feature film," Jellerson said.

He has personal commitment to these stories because after growing up in Southern California, Jellerson served two tours in Vietnam as an Army helicopter pilot. His first combat tour was with the 116th Assault Helicopter Company; he then served as Army Gen. Creighton Abrams personal pilot while Abrams commanded all forces in Vietnam.

“I did fly helicopters during two tours in Vietnam, and we got shot up and several of us got shot down,” Jellerson said. “We lost a lot of my company, the assault helicopter company, but none of them were MIAs." While interviewing a Vietnam War helicopter pilot for "Helicopter Warfare in Vietnam," the pilot told Jellerson that "if he'd been shot down over there, they would still be looking for him. And that just struck me as amazing," Jellerson said. "Then I started studying it and doing research on it and found out that we were the only country on the planet that does that, we never stop looking for these guys. Then it kind of became a mission.”

Jellerson’s passion as a veteran and patriot comes through in his voice as a storyteller. “I think this story is something every American should know about and be proud of – the commitment to our servicemen and their families. So, that drives me too,” he said.

Jellerson wants to help the loved ones of those missing in action to understand what it must have been like for the individual who was lost. “When I was interviewing a lot of these families what I learned was that they didn't have any idea what their son or dad, (or) uncle's last mission was. They had no concept,” Jellerson said. “I want to bring people into it. I want to pull people into their stories.”

He feels most documentaries on this subject are linear in their approach and just let people talk. He intends to do more with high production value and show clips of what the last mission probably looked like while talking to the family and loved ones of those unaccounted for.

The Department of Defense is supporting Jellerson in his efforts to tell an accurate story, giving him access to after-action reports and other information and resources such as bases, cemeteries, files and other personal information. “I want to help the individuals telling the story of their loss to have people understand that loss more,” Jellerson explained.

"General Linnington is just a butt kicker. The families I'm in touch with are very happy with what's going on now," Jellerson said.

Following his retirement as a lieutenant general in the U.S. Army, Linnington was appointed by Secretary of Defense Ash Carter as the first permanent director of DPAA on June 19, 2015. “This guy has just totally embraced any organization who wants to help,” Jellerson said. “He is responsible for all aspects of accounting for the nation’s missing personnel from past conflicts including policy, control and oversight. He leads the entire process of research, investigation, recovery and identification in order to provide the fullest possible accounting of our missing personnel to their families and to the nation.”

Because new policies have reversed an old stance that DoD had where they did not want civilians actively looking for MIAs, now private organizations are receiving government assistance during their search for America's missing war heroes. Jellerson said there will be some families that will finally have closure because of this change.

Helping families get closure is what personally and strongly motivates Jellerson to tell the stories of those missing in action.

“One of the things that drives me is a home movie of a very young looking widow," he said. "(It's) wintertime, trees are bare, and she's about five feet from her husbands coffin. There's a (U.S.) flag on it, he is going to be put in the ground and buried. A very nicely uniformed Army captain is giving her the folded flag and telling her the usual speech, ‘With the thanks of a grateful nation.’ But you look at the chairs next to her, and she is by herself. It galls me to this day. Matter of fact, if I ever start to lose momentum, and I can't talk to the advisory board (because it's) in the middle of the night, I will just roll out to nine minutes on that trailer and look at that scene. And I get motivated all over again.

"Everybody within a hundred miles should've been standing there with her. It drives me nuts even now just talking about it.”

Jellerson's gone out on a limb to get his film made and the story told in a way that is meaningful to a broad audience. He’s put up his own money to get it this far, and said he doesn’t regret a dime in doing that. Post 43 also has been supportive.

For more information about "A Solemn Promise," including a 10-minute trailer and a look at the film’s advisory committee,visit www.storytellerfilms.tv.