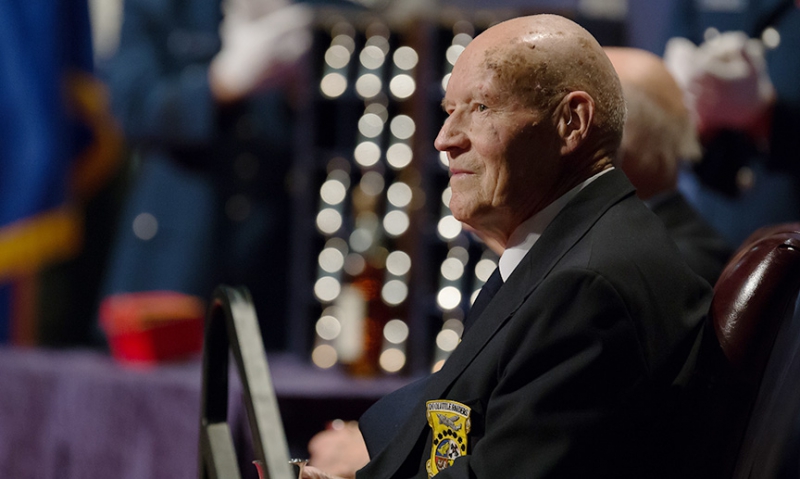 Staff Sgt. David Thatcher looks on as a the crowd gives the Tokyo Doolittle Raiders a standing ovation at the final toast at the Air Force Museum in Dayton, Ohio, on Saturday, Nov. 9, 2013. Photo by Lucas Carter / The American Legion

Retired Staff Sgt. David Jonathan Thatcher, one of the last two surviving members of the Doolittle Raiders, has died in Montana after suffering a stroke. He was 94.

Thatcher's death leaves Retired Lt. Col. Richard "Dick" Cole of Comfort, Texas, as the only living airman from among 80 who took off from an aircraft carrier on 16 B-25 bombers to target factory areas and military installations in Japan on April 18, 1942.

Thatcher, engineer-gunner of Aircraft No. 7, received a Silver Star for gallantry after his plane - “The Ruptured Duck” – crashed near China after the bombing.

The plane, which was running low on fuel, flipped over and all the crew members except for Thatcher were seriously injured. After regaining consciousness, Thatcher administered first aid to his crew members and convinced some Chinese guerrillas to take the crew to safety in inland China.

The crew's experiences were documented in the movie "Thirty Seconds Over Tokyo," based on the book written by the plane's pilot, Lt. Ted Lawson.

In November 2013, Thatcher was among three of the four surviving Doolittle Raiders at that time who performed the final toasting ceremony for their fallen comrades at the United States Air Force Museum in Dayton, Ohio.

During an interview with The American Legion, Thatcher said they volunteered for the mission as a sense of duty.

“The most memorable moment of the mission wasn’t the training, long over-water flight or the dropping of the bombs in Tokyo,” he said at the time. “It was the crash landing. You just can’t forget something like that.”