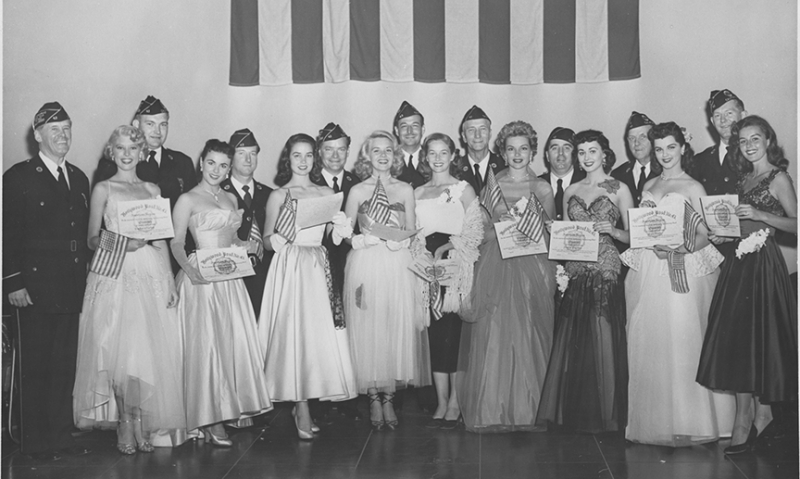 In 1938 the Honorary Colonels included Rita Hayworth and Lana Turner.

American Legion Hollywood Post 43 has a historic relationship with show business, especially since its called “Post to the Stars.” Since 1932, a colorful and glamorous affair known as Honorary Colonels Night has held special significance for the Hollywood post and members of the motion picture industry.

What began as a way for the entertainment industry to introduce budding stars has become Post 43’s way of recognizing those who go out of their way to show support for military servicemembers and the veteran's community. This is the night when the Legion and the movies get together to stage the annual event that has become a part of Hollywood tradition.

Honorary Colonels Night has held special significance since 1931 when Madame Ernestine Schumann-Heink introduced 12 emerging starlets. Schumann-Heink, a beloved opera singer, was hailed as "the world's outstanding contralto" and known by Post 43 members as the "Mother of the Legion."

In the early 1920s, when Post 43 was a small but ambitious post, the foremost actors and actresses of the day, under the leadership of Theodore Roberts, a film and stage actor known for his roles in the productions of Cecil B. Demille, staged an all-star show. It enabled the post to not only acquire its first clubhouse, but also to build the world famous boxing stadium. Hollywood Post 43 has never forgotten this, and Honorary Colonels Night is a small token of its gratitude.

Today, Honorary Colonels are recognized at Post 43's annual Commanders Ball, which recognizes celebrities who do great things for veterans. The 2016 recipient of the Honorary Colonel award is actor Joe Mantegna.

Mantegna has been the co-host, along with Gary Sinese, of the National Memorial Day concert in Washington, D.C., for 11 years. He’s the national spokesman for the campaign to build the National Museum of the United States Army, which will be the largest military museum in the world. He’s been a spokesman for New Directions, an organization in Los Angeles that takes in vets who are homeless, who have substance abuse problems.

“It’s a privately owned rehab facility,” Mantegna explained. “It’s an incredible organization, and I’ve been their spokesman for over 10 years now.” He has been able to profile New Directions on the CBS police procedural "Criminal Minds," which drew national attention to them. He’s also an ambassador for the Gary Sinese Foundation.

The tradition goes back to an evening when each of the major film studios were represented by upcoming stars that were then commissioned in an impressive ceremony. Prominent guests, usually a motion picture star, were the honored guests of the evening and the post presented them with the silver wings of their honorary rank in concert with the aims and ideals of The American Legion.

More than 200 actors have been inducted as Honorary Colonels of Hollywood Post 43 over the years, mostly in the years before 1952. Many famous stars made their debut in the Hollywood post, including Rita Hayworth, Marilyn Monroe, Jayne Mansfield, Ginger Rogers, Lana Turner, Dawn Wells and Shirley Temple, to name a few.

Rita Hayworth was a top glamour girl in the 1940s, a pin-up girl for military servicemen and a beauty icon for women. Her younger brothers, Vernon and Eduardo Cansino Jr., both served in World War II. Marilyn Monroe is among the most famous Honorary Colonels. Before she changed her legal name and hair color, she was contributing to the war effort in a military factory as Norma Jean Dougherty; her main job was spraying down planes with fire retardant. Her devotion to the troops never waivered when "Gentlemen Prefer Blondes" made her a star and she traveled to Korea and entertained 13,000 Marines stationed there. She referred to that trip as the best thing that ever happened to her and said she never felt more like a star in her heart.

Shirley Temple, known as “The little colonel,” was regarded as the Legion's little sister and was inspirational from her childhood on to her distinguished career as a diplomat.

Other Honorary Colonels like Ginger Rogers and Lana Turner were very active with the United Service Organizations (USOs) and participated in the Hollywood Canteen, a club offering food, dancing and entertainment for servicemen usually on their way overseas.

In 2015, Post 43's entertainment committee revived the tradition of its Commanders Ball, naming Mamie Van Doren and Gina Elise as Honorary Colonels. Much like many servicemembers of that era, Van Doren was not recognized for her outstanding support of the military at the time, and Post 43 wanted to honor her now.

During the Vietnam War Van Doren did tours for U.S. troops in Vietnam for three months in 1968 and again in 1970. She did not go with Bob Hope’s show as many assume. Van Doren went with a small band of musicians, flying in helicopters from one end of South Vietnam to the other, the Delta to the DMZ. She vowed that she would never forget the feelings she shared firsthand with the troops, and she has continued to support servicemembers throughout her life.

In 2003, Van Doren was part of a documentary called "Entertaining Vietnam." It was about non-USO entertainers in Vietnam who had to live by the seat of their pants to bring their shows to troops in the boonies and places where the establishment acts didn’t, or wouldn’t, go. In 2008, she encouraged artists and entertainers to go outside of the normal USO safe zone and influenced shows in Fallujah and Ramadi.

In the spirit of honoring the legacy while sharing the vision, last year Post 43 also named Gina Elise an Honorary Colonel. Elise is the founder of Pin-Ups for Vets, a nonprofit that raises funds to improve veterans health care. She and her group have individually visited more than 10,000 ill and injured veterans at their bedsides in 57 VA facilities, military hospitals and state veterans homes across 31 U.S. states and overseas.

Pin-Ups for Vets has released 10 annual calendars that include celebrities and veterans posing as 1940s pin-ups. The 2017 version is the 11th edition and features 25, both female and a few male, veterans.

This year’s Commander’s Ball was attended by honored guest Danny Trejo, who was recognized for his support of veterans and particularly for his role in the film "Range 15," a veteran-made horror comedy where he plays Zombie Trejo. Trejo has been to Hollywood Post 43 before as part of an interview series for the G.I. Film Festival, and his son Gilbert will be getting married there in August. Although he never served in the military, Trejo has great respect for the military. “I wasn’t eligible for the draft because I was in San Quentin,” he joked. “I was sitting there wondering why they weren’t sending us.”

While receiving Honorary Colonel at the Commanders Ball, Mantegna reflected on his mother’s four brothers and father's one brother who all served in the military and were very influential in his life. “I couldn’t have had five better people to be role models for me growing up,” said Mantegna. “Beyond that, my story is not too different from Danny’s (Trejo), we’re probably about the same age, and we both kind of missed the Vietnam War, for similar kinds of things, except I wasn’t in San Quentin, I was in junior college.”

Mantegna went on to describe the honor of receiving a star on the Hollywood walk of fame just a few blocks from the memorial clubhouse. When you get a star on the Hollywood Walk of Fame, you’re allowed to have two people speak on your behalf. The first person Mantegna choose was David Mamet, a close friend, writer and very influential person in his life, because he wanted one person to be able to address his career. The other person he chose was retired Marine Corps Lt. Gen. Willie J. Williams, one of only four African-American Marines to wear the rank of three-star general.

“I wanted somebody else to be able to address where my passions really lie. To show why I am so fortunate. To be in a position to even get that star. Even live in this country to succeed in the life I’ve lived,” Mantegna said. “I’ve been very fortunate in my life to be in a business where I portray heroes, I’ve played police, I’ve portrayed firemen, portrayed doctors, I’ve played all kinds of different people, that’s what we do in show business. And very often those roles are heroic roles.

"What we do on Hollywood boulevard, is we give stars to people who’ve spent their careers portraying heroes. But the difference between that and those in this room, and those who’ve preceded you and will follow you, is that while we have a street in Hollywood with names of people who’ve spent their lives portraying heroes, in Washington, D.C., we have a wall that has the names of people who are heroes. That is the difference between those of you who have given your service to this country, and those of us who have lived and profited, and benefitted from your service. So because of that you will now and forever always have my 100 percent support.”